Nasrallah: Trump's Peace Plan is unjust and it is our duty to oppose it

Hezbollah Secretary-General delivered speech on International Jerusalem Day, referring to the American administration's plan "I have hope that we will be able to prevent the historic crime." 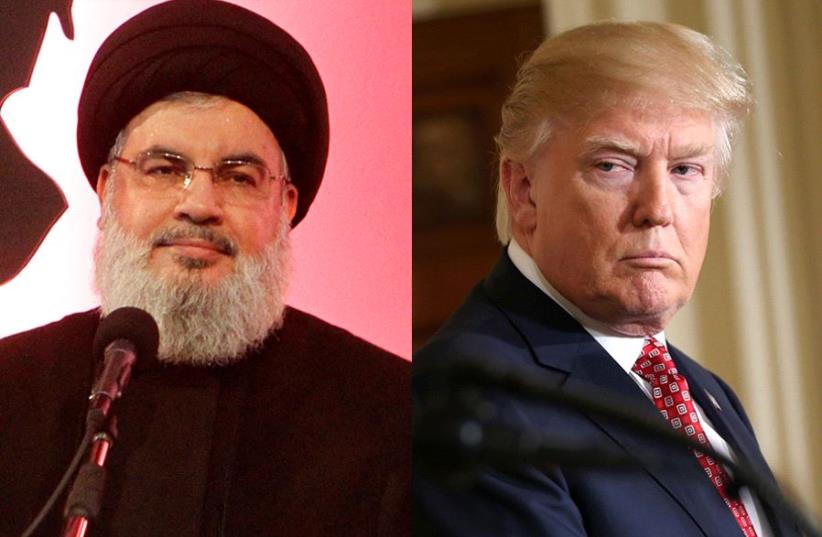 Nasrallah and Trump
(photo credit: REUTERS)
Advertisement
Hezbollah leader Hassan Nasrallah said in a speech on the occasion of al-Quds Day that “in the past 40 years, the enemies of Jerusalem have been betting that they we will ignore it or forget it, but year after year we find that people still express great interest.”“We have seen large demonstrations in several countries around the world and the demonstration of one million in Iran,” he said, adding that the biggest demonstration in Iran was “A message to [US President Donald] Trump and to those who assumed that the Iranians were tired or failed.”Nasrallah related to the Trump peace plan, saying that “it is a religious, moral, national and political obligation to oppose [it], since this is a deal that is unjust and is contrary to the rights of the holy places.”He further stressed that “the responsibility is clear: We must confront this deal, and we are capable of obstructing it.”According to Nasrallah, the current situation shows that the plan is on its way to failure.“The United States, Israel and other regimes in the region are working to implement the deal, alongside an axis that opposes it,” he said. “There is a conflict between the two factions, and I hope we can prevent the historic crime that is liable to occur in our land.”Hezbollah’s leader said that some of the regimes are working to make Israel the main axis in the region, along with an attempt to end the Palestinian and Jerusalem issues.“Since 2011, there has been an American attempt to eliminate the Palestinian issue after giving the Palestinians a little time, but after the victory of the resistance in Lebanon and Palestine, they prepared their project to liquidate the resistance factions,” Nasrallah explained. “After 2011, the US and any country involved in the ‘Arab Spring’ got the fruit of the frenzy called Trump’s ‘Deal of the Century.’”Nasrallah added that “The Palestinian resistance today is hitting Tel Aviv and what is beyond it, and it is capable of hitting all the Zionist settlements.”He also related to Syria, saying, “They crossed what was planned against it and remained in the axis of resistance. Syria will become stronger when all the American attempts to take over Iraq militarily fail.”In addition, Nasrallah mentioned the Arab summit currently underway in Mecca: “The background to the call to Muslims to reach the summits is to save the Saudi regime as a result of the development of the Yemenite axis after the rising power [Houthis, supported by Iran], and the regime is trying with the help of mercenaries to force the Yemenites to surrender. All these summits prove that the Yemenite people and the opponents of the Saudis won. Trump knows that if war breaks out – the price of a barrel of oil could rise to $200-300.”Meanwhile, the deputy commander of Iran’s Revolutionary Guards boasted that if Iran had supported the Houthis in Yemen, they would have taken over Riyadh.