Earlier this week, Iran's ambassador to Lebanon said that Tehran would offer $7,000 to the families of each Palestinian killed in what he called the "Al-Quds Intifada." 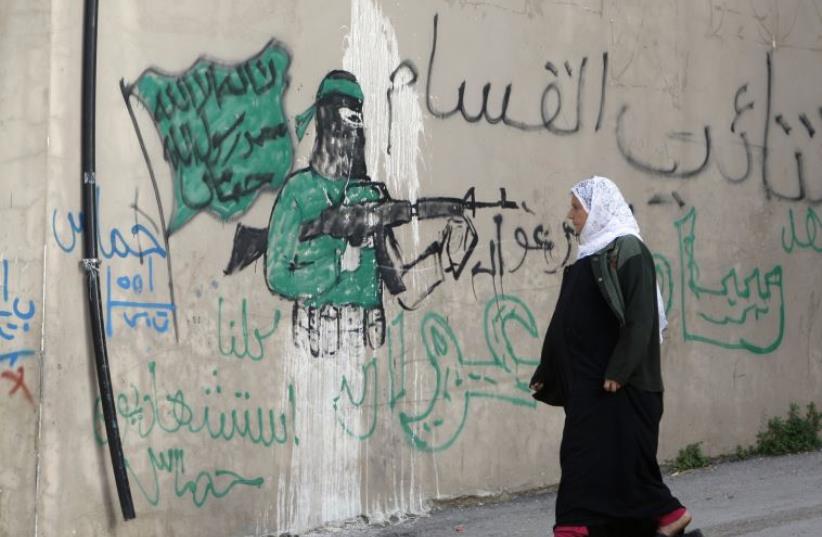 A Palestinian woman walks past a wall with graffiti depicting a gunman from the Al-Qassam brigades, the armed wing of the Hamas movement, in the West Bank village of Awarta. The graffiti reads "All of us are martyrs."
(photo credit: ABED OMAR QUSINI/REUTERS)
Advertisement
The Palestinian Authority said Friday it rejects a reported offer by Tehran to pay families of Palestinian “martyrs” and those whose houses were demolished by the IDF.Nabil Abu Rudaineh, spokesman for the PA president’s office, said the Palestinian leadership was unaware of the Iranian decision and rejects the Iranian “trade in the suffering” of the Palestinians.The PLO “rejects any attempt to bypass it and insists that the PLO is the sole and legitimate representative of the Palestinians,” he said, adding that the PLO would not hesitate to provide aid and ease the suffering of the Palestinians despite its limited capabilities.Iran’s ambassador to Lebanon, Muhammad Fathali, said last week Tehran would offer $7,000 to the families of each Palestinian killed in what he called the “Al-Quds Intifada.”Iran also will give $30,000 to Palestinian families whose homes have been destroyed by Israel, he told a news conference in Beirut.