Only an hour after it ended, Palestinian media was already praising the Tel Aviv bus stabbing that injured nine with cheerful cartoons.

By MICHELLE MALKA GROSSMAN
Cartoons glorifying the stabbing attack
(photo credit: PALESTINIAN MEDIA)
Advertisement
Palestinian media rejoiced Wednesday over the gruesome Tel Aviv stabbing attack with a series of celebratory cartoons.The first cartoon, drawn by cartoonist Bahaa Yaseen, was posted within the first 90 minutes following the attack. It shows a smiling terrorist holding a bloody knife and praising the attack, which at the time was reported to have wounded 10 people. The figure stands in front of a sign that reads “Occupied Tel-A-rabia,” a play on the words Tel Aviv, and a bus with the route number of the target bus and a Jewish star. Blood is depicted pouring from the doors and onto the street. 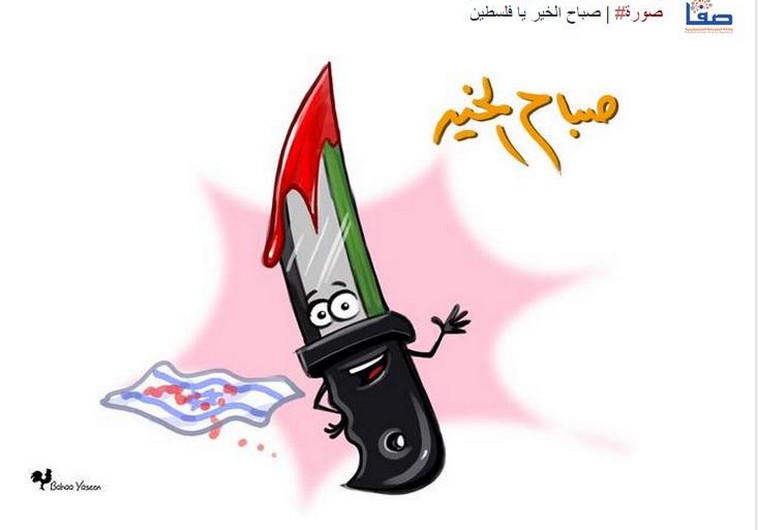 Another caricature, posted by the Palestinian Shehab agency and also drawn by Yaseen, shows a smiling cartoon knife next to the text, “Good morning, Palestine” in Arabic. The blade of the knife forms the Palestinian flag, with the red portion made by blood. Behind the cheerful weapon is an Israeli flag covered in blood. Both of the cartoons were eventually removed from Twitter and Facebook.