Jerusalem is pushing for direct negotiations in place of the French plan. 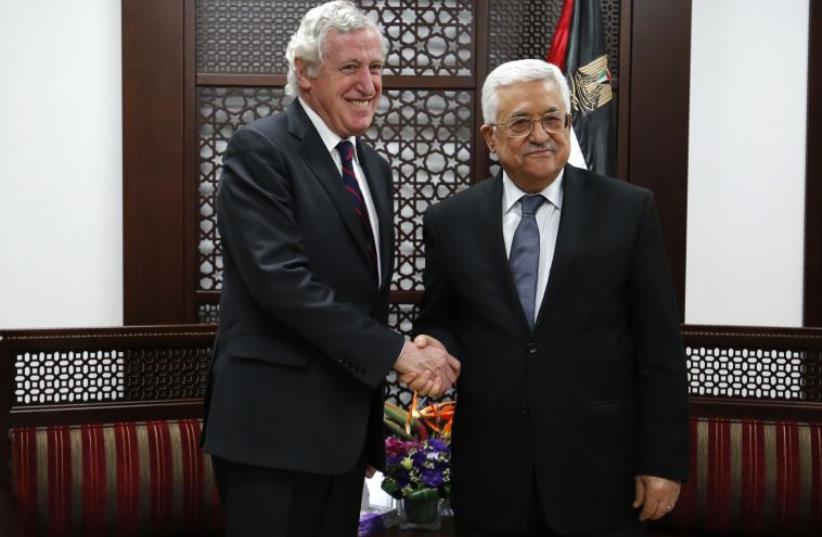 France's Middle East envoy Pierre Vimont (L) meets with Palestinian president Mahmud Abbas on March 15, 2016, in the West Bank city of Ramallah
(photo credit: ABBAS MOMANI / AFP)
Advertisement
Palestinians on Monday welcomed a French plan to hold an international conference on the two-state solution in Paris at the end of December.“We have encouraged France to go ahead with its initiative and supported its efforts to have a multilateral conference before the end of the year,” PLO Secretary-General Saeb Erekat said after meeting with French envoy Pierre Vimont in Ramallah.Vimont  is in Israel and the Palestinian territories to drum up support for the gathering that he hopes will draw a pledge of support for the two-state solution from the global community.In Ramallah he received a warm welcome from Palestinian Authority President Mahmoud Abbas and Erekat. They urged Vimont not to let Israel “sabotage” the international conference.“Israel is a state that does not only refuse to attend international conferences, but refuses to recognize Palestine, to implement signed agreements, UN resolutions or simply to abide by its obligations under international law. Israel wants only to maintain the status quo and to continue with its settlement policies and land grabs,” Erekat said.He noted that next year marks “50 years of the Israeli occupation.”“The world should not allow Israel to continue vetoing the inalienable right of Palestine to be free,” Erekat said.In Jerusalem Prime Minister Benjamin Netanyahu called on Abbas to immediately hold direct negotiations with him.He issued his statement when he met on Monday in his Jerusalem office with Fijian Prime Minister Frank Bainimarama.“The quest for peace is difficult but we remain committed to it,” Netanyahu said. “And you know, Mr. Prime Minister, every time there is a foreign leader here I always say: Look, I'll be happy to begin peace negotiations without any conditions of course but direct negotiations with President Abbas,” Netanyahu said.Abbas has persistently rejected such calls, stating that Israel must halt all settlement activity and Jewish building in east Jerusalem before such talks could be held.Israel on Monday warned France that their plan only emboldens Abbas to continue to refuse to negotiate. “True progress in the peace process and achieving an agreement will come only through direct negotiations between Israel and the Palestinian Authority, and that any other initiative only pushes the region further away from this process,” Israeli envoys Brig.-Gen (retired) Jacob Nagel and Yitzhak Molho told Vimont.Just one day earlier Vimont had called on Israel to participate in the conference as a sign of its commitment to peace with the Palestinians.But Nagel and Molho made it clear to Vimont that this would not happen.Israel is committed to the peace process, but believe that a final status agreement with the Palestinians can only be reached through direct talks, the two envoys told Vimont.“Israel will not participate in any international conference convened contrary to its position,” said Nagel, who is the Acting National Security Advisor and Molho who is Netanyahu’s personal envoy.“Promoting such a conference will make the possibility of advancing the peace process much less likely since it will allow [Abu Mazen and the Palestinian Authority to continue avoiding the decision to enter into direct negotiations without preconditions,” they said.The two men added that the expected France not push forward with an initiative that “contradicts the official position of the State of Israel.”In speaking to an Israeli audience about the initiative on Sunday, Vimont said that it was not intended to supplant direct talks nor would it impose terms for a final status resolution of the conflict. It’s goal, Vimont said was to help preserve the option for a two-state solution given that direct talks are not feasible at this time.