Terrorist shot dead by police after stabbing youth in Jerusalem

The perpetrator was shot with the knife still in his hands. 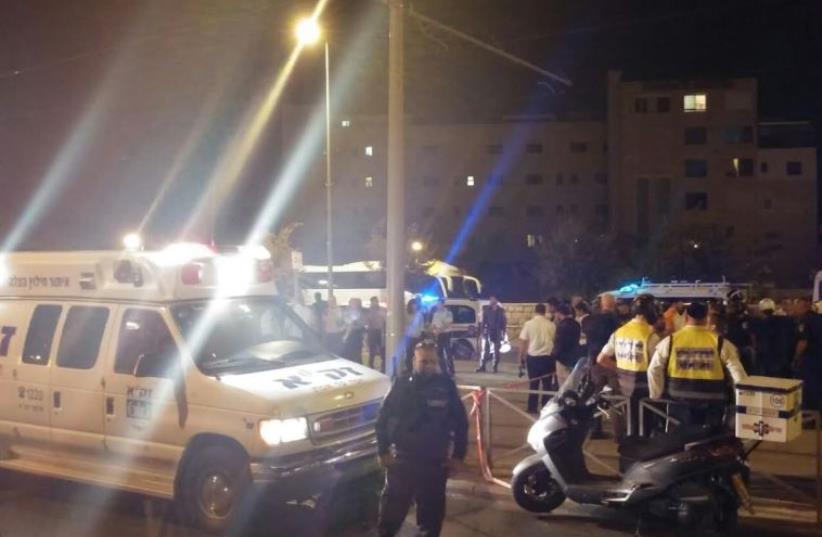 Security forces respond to stabbing in Jerusalem
(photo credit: ISAAC FRYE/ NEWS 24)
Advertisement
An Israeli teenager was stabbed in at a gas station near Jerusalem's Old City on Sunday morning.Police spokeswoman Luba Samri said the victim was taken to hospital in moderate condition and that police"saw the terrorist holding a knife, shot and neutralized him."The attack comes amid heightened tension in the capital, and less than 12 hours after a Palestinian terrorist murdered two Jewish men and wounded a mother and her son in the Old City of Jerusalem in a stabbing and shooting spree Saturday night. The suspect was shot dead following the attack. The victims were Rabbi Nehemia Lavie, 41, an Old City resident who worked at the Ateret Cohanim Yeshiva, near the place he was killed, and Aharon Benita from Beitar Illit.The toddler’s mother, 22, was in critical condition.The incident began around 7:30 p.m., when the knife-wielding Arab attacked the couple and their toddler son, as well as Lavie, as they walked past Lion’s Gate, en route to the Western Wall, police said.A fifth male victim, in his 20s, was lightly wounded.The terrorist took a pistol from one of his victims and fired wildly into a crowd of tourists, before Border Police officers on patrol some 50 meters away killed him. The terrorist was later claimed by Palestinian militant group Islamic Jihad.In light of these attacks, police have restricted access to Jerusalem's Old City. Only residents, tourists, business owners and students living in the Old City will be granted access. Access for Muslim worshipers to the Temple Mount was restricted to men above the age of 50 with no age limit set for women. Hamas lauded Saturday’s Old City killer as a “hero.”On Thursday night, a Palestinian gunman shot dead two Israeli parents in a shooting attack on their vehicle in Samaria, between Elon Moreh and Itamar. Four of their young children survived the attack without injury and were rescued by emergency responders from the bullet-ridden vehicle.Magen David Adom paramedics and IDF units pulled the children out of the car near the Palestinian village of Beit Furik, and paramedics declared their parents, Eitam and Na'ama Henkin, dead on the scene after failing to detect vital signs.An undisclosed number of suspects were arrested on late Friday night raids in Nablus, on suspicion of being linked to the murder of Eitam and Na'ama Henkin.The arrests were carried out by the Shin Bet domestic intelligence agency together with the IDF, Israel Police, Duvdevan special operations unit, and the Border Police’s Counter-Terrorism Unit. The forces moved into the Palestinian city, located some five kilometers northwest of the scene of the murders, and made several arrests of security suspects.Reuters, Daniel K. Eisenbud, Lahav Harkov and Yaakov Lappin contributed to this report.