The incident occurred during the funeral of a Palestinian man who was recently freed from an Israeli jail. 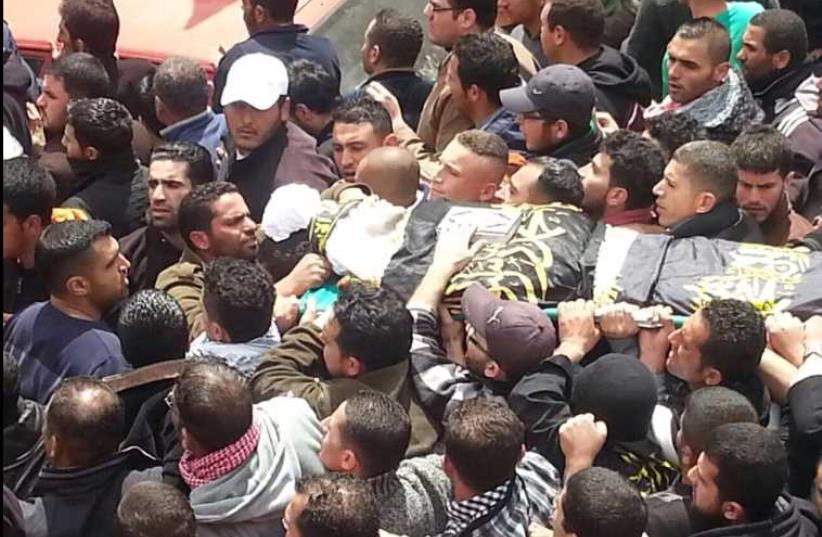 Palestinians take part in a West Bank funeral procession for an Islamic Jihad man who died after his release from an Israeli prison
(photo credit: MAAN NEWS AGENCY)
A Palestinian was killed during a clash with the IDF near the West Bank town of Beit Umar, according to Palestinian reports.According to one report received by the IDF's regional Coordination and Liaison Administration, the Palestinian was killed by an IDF bullet in the course of a violent clash that erupted during a funeral.IDF sources said a funeral procession for a former Palestinian prisoner who died of natural causes erupted into a large-scale clash, with some 700 rioters hurling rocks and firebombs at army units in the area.According to Palestinians, the casualty is the cousin of the former inmate.Soldiers responded by firing 0.22 caliber bullets from a Ruger rifle, which fires weaker shots compared to live fire, according to the sources. Non-lethal crowd control measures were also deployed during the incident."The incident is still being checked. We did not use live fire," one army source added.The clash occurred in the Etzion Sector, near Route 60. "Since the whole event is still ongoing, we need to wait further for more details," a second source said.An army spokeswoman said multiple riots occurred simultaneously in the area, and that in addition to rocks and Molotov cocktails, burning tires were hurled at soldiers, who were stationed in the area to protect roads. Soldiers fired Ruger rifle shots at four rioters identified as being ringleaders in the disturbances, the spokeswoman added, striking all four. "We are checking reports of a casualty," she said.