'There is no place for encouraging terrorism on Facebook,' official says 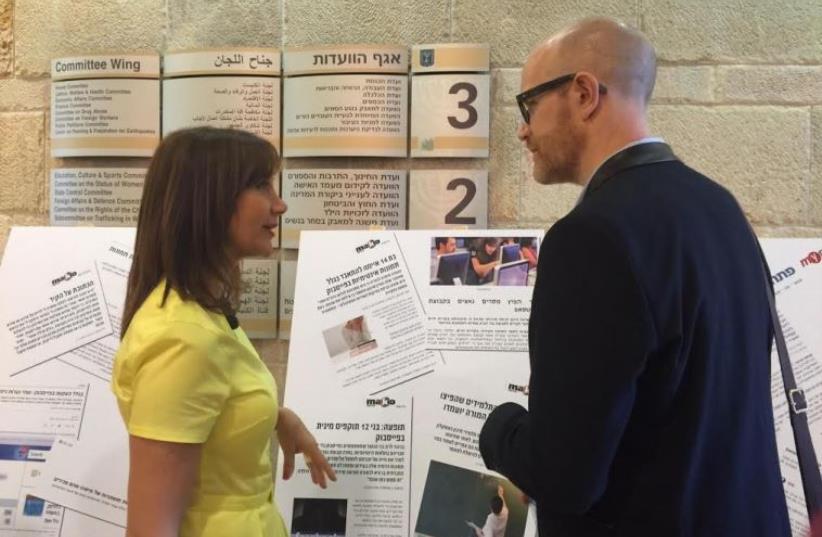 Zionist Union MK Revital Swid (L) and Facebook UK's Simon Milner at a cyberbullying conference in Knesset last week
(photo credit: COURTESY/THE OFFICE OF MK REVITAL SWID)
Advertisement
Facebook takes complaints about incitement seriously, Facebook UK, Middle East and Africa Policy Director Simon Milner wrote to MK Revital Swid (Zionist Union) this week.The letter followed a conference attended by Milner, which Swid headed in the Knesset this month, as chairwoman of the Caucus Against Violent and Inciting Dialogue in Social Media.Swid wrote Milner after the session was held that “in recent days, Israel has witnessed a wave of terrorism, where Jewish civilians have been targeted as a direct result of blatant incitement and encouragement of violence derived from social media.“My request to you is the following: Facebook, Inc. should immediately locate, monitor and remove pages that spew incitement and encourage murder,” she wrote. “Facebook cannot detach itself from the terrorism being enabled through its network.You have the capability and the responsibility to bring an end to the ongoing publication of incitement and encouragement and terror.”Swid called it “inconceivable” that it would take several requests before Facebook did anything about such content.The MK also called for Facebook to hire a representative in Israel to address incitement, saying the rise in social media-inspired terrorism justifies such action.Milner wrote to Swid on Tuesday that Facebook takes cyber bullying “extremely seriously.”“Nothing is more important than the safety of people using Facebook. There is absolutely no place for content encouraging violence, direct threats, terrorism or hate speech on Facebook,” he wrote.Milner said that Facebook has native Hebrew and Arabic speakers on staff who understand local context and review complaints. Whenever the site’s standards are found to have been violated, the content is removed, she said.The Facebook official encouraged Swid and other MKs to let Facebook know if its staff declines to remove a post that violates its standards.“In the last few weeks, we’ve seen a significant increase in reports about content related to high-profile events in Israel,” Milner said.