This is the third time in a row that ICOMOS has failed to recommend a Palestinian Authority proposal for inscription on the "World Heritage in Danger" list. 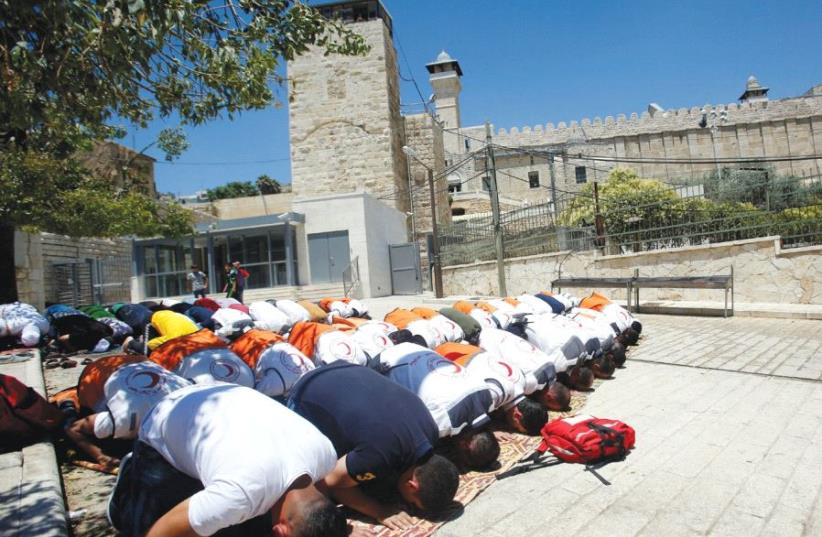 Muslims attend Friday prayers at the Tomb of the Patriarchs in Hebron, holy to both faiths as the burial site of Abraham
(photo credit: MUSSA QAWASMA / REUTERS)
Advertisement
UNESCO experts have warned the Palestinian Authority that it has overly focused on Hebron’s Muslim history at the exclusion of the Judeo-Christian heritage in its request that the West Bank’s city’s “Old Town” be inscribed on the “World Heritage in Danger” list.The failure to make a full case for inscription as a heritage site, combined with Israel’s decision to ban experts from visiting the city, make it difficult to conclude whether an emergency situation exists, the International Council on Monuments and Sites (ICOMOS) said in an 11-page report it submitted over the weekend.The 21-member World Heritage Committee is expected to vote on the inscription of Hebron’s Old Town and the Cave of the Patriarchs to the “State of Palestine” this Friday in Krakow, Poland, during its annual meeting, which began on Sunday.The PA’s written proposal had focused on Hebron’s “Old Town” history from the Mamluk period of 1250 and onward, which includes the Tomb of the Patriarchs, whose Herodian structure houses both Jewish sanctuaries of worship and the Ibrahimi Mosque.“A further weakness is the definition of the property as a Mamluk town, as this excludes the extremely important time depth of Hebron, a town whose history can be extended back at least a thousand years before the Mamluk period and possibly much longer,” ICOMOS said.“Although it is stated that the nominated property is thought to be one of the oldest cities continuously inhabited in the world, the emphasis of the nomination is on a small period of that history in the form of the Mamluk town, apart from the earlier structures of the Al-Ibrahimi Mosque/The Cave of Patriarchs.“This means that the association of Hebron with Jewish and early Christian societies is given little recognition, and Tell Rumeida [an area of Biblical Hebron] and other sites are excluded from the boundaries,” the report continued.ICOMOS said the PA would have done better with an expanded timeline and larger geographical area of the city, which could have spoken of its importance to the development of three monotheistic religions starting from 2200 BCE.“On the basis of the current Mamluk focus of the nomination dossier, ICOMOS considers that insufficient detail has been provided to substantiate the outstanding nature of the survival of town planning and buildings relating to the Mamluk era.“There appears to be the potential for a strong case to be made for considering Hebron as a pilgrimage center. But to support this, Tell Rumeida would need to be included and a clearer focus on sites relating to Jewish heritage,” ICOMOS stated.The group of experts also said it was clear that IDF activity in Hebron’s Old Town was “systemic” and interfered with the conversation of the historic properties there.“The threats and violations reflect a long-standing and complex political situation,” ICOMOS said, adding that “a political response” was the best way to address the issue.In making its formal recommendation at the end of the report, it called on Israel to allow its team of experts to visit the site.The absence of a field visit, plus the limited details of the Palestinian report, meant that ICOMOS “could not fully evaluate” the proposal or confirm that the site met the qualifications for inscription, it said.This is the third time in a row that ICOMOS has failed to recommend a Palestinian Authority proposal for inscription on the “World Heritage in Danger” list; it rejected both the 2012 proposal to put Bethlehem’s Church of the Nativity and 2014 request to place the ancient agricultural Terraces of Battir on the list.In regard to Hebron, ICOMOS failed to recommend it, but did not unequivocally reject it. The World Heritage Committee overlooked those recommendations, however, and approved the requests. Israel fears it will do the same this time around, as well.The actual text of the decision states that ICOMOS was not able to fully evaluate the site due to the absence of a field visit. Still, Israel’s Ambassador to UNESCO, Carmel Shama HaCohen, claimed the report as a victory in the campaign to thwart the initiative.“This report is a stamp of approval that confirms the historical and current truth to our claim that the Palestinians are waging a religious and heritage war against the Jewish people,” Shama HaCohen said, speaking from UNESCO headquarters in Paris.Israel is working to sway the 21 members of the World Heritage Committee to reject the Palestinian request.The members are: Angola, Azerbaijan, Burkina Faso, Croatia, Cuba, Finland, Indonesia, Jamaica, Kazakhstan, Kuwait, Lebanon, Peru, Philippines, Poland, Portugal, Republic of Korea, Tunisia, Turkey, Tanzania, Vietnam and Zimbabwe.