Raichel and his unrealistically talented singers prove once again why they are one of the most popular acts around in Israel today.

By YONI COHEN
JUNE 15, 2013 22:37
Idan Raichel performing at Ceaserea Amphitheater 370
(photo credit: Hadas Parush)
Advertisement
On Wednesday night I was lucky enough to visit a very special place. It was a place where, for three or so hours, everything seemed right in the world.Good vibes, equality, cultural diversity and most importantly, world-class music were just some of the things that I experienced. I wasn’t in some faraway land, but at an Idan Raichel Project concert at the infamous Ceaserea Amphitheater. The concert was one of four sold-out performances taking place this week.Raichel and his almost unrealistically talented singers and musicians proved once again why they are one of the most popular and professional acts around in Israel today.The members of the nine-piece orchestra were the first to take the stage, then the singers and finally Raichel himself. Raichel, sporting a newly-shaved head, without his trademark dreadlocks, took his place behind an inconspicuous piano located at the very side of the stage while his three main singers took center stage.The show got off to a relatively slow pace with popular, well-known hits such as “Achshav Karov” and “Shariot Shel Hahayim.”The song that really got the show started was “Inta Inta” sung in Arabic by the extremely glamorous and talented Miya Avraham. 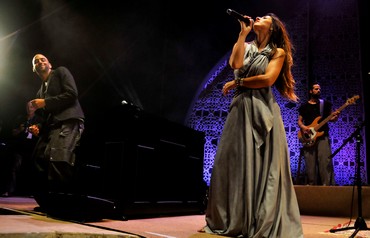 Idan Raichel performing with Maya Avraham (Hadas Parush)It was after this heartfelt rendition that Raichel finally addressed the crowd. He talked about how emotional it was to be performing in front of so many people. He then switched to English to welcome some of his guests of honor, which included the Canadian ambassador as well as members of the Argentinian embassy. While he talked of his excitement about traveling and performing in various countries recently, he said nothing quite compares to performing in Israel. After that comment the crowd was his for the night.Avraham showed her depth and range once again with an emotional rendition of “Minhar Li Mishiti” that left the audience blown away.Another performance that also had people reaching for the tissues was that of “Mima’amakim” sung by Avi Wassa. The song itself is full of depth, but the heartfelt performance had everyone singing along.The show continued with various other slower songs, including “Balayla” from the latest album Reva Leshesh.Raichel is known for his deep and meaningful songs, and up until “Balayla” each one was sung with passion and intimacy. It was with “Brong Paya,” sung in Amaharic, however, that the show switched gears and the party began.For the next few songs the Roman amphitheater was transformed into a full-on African party. Featuring mainly the two Ethiopian singers in the project, Avi Wassa and Kabra Kasai, the next five songs got the crowd on its feet dancing and singing along. 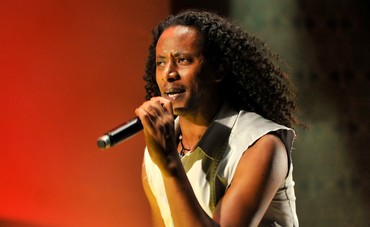 Avi Wassa (Hadas Parush)The atmosphere was electric. The songs were accompanied by powerful video art images of Africa, as well as strong Jewish imagery, that were shown on the huge screen making up the back of the stage.After all the energy, the singers and musicians exited the stage for a half-time break and Raichel was left on stage by himself in his own little corner. He sang a few of his classics such as “Im Telech” and “Milim Pshutot,” pausing every so often to listen to the crowd signing along to every word.He took the opportunity to pull on their heartstrings some more. He told the very emotional story of an injured soldier that he had once helped. That injured soldier was Noam Gershony, who went on to win gold at the 2012 London Paralympics, and who was present in the audience. The cheers from the crowd were almost deafening.Next came by far the most emotional part of the evening. Singer Ilan Damti joined him on stage, sat on a stool and Raichel proceeded to tell the story of Damti and how he got involved with music even though he grew up in a house with two deaf parents.Raichel dedicated the song “Mekol Ha’ahavot” to Damti and his parents. Instead of Damti singing along as the crowd was expecting, he performed the whole song in sign language. He received the loudest cheers of the night. There weren’t many dry eyes in the audience by the end of the song.After a few more slow songs to carry on the deep atmosphere, the amphitheater was once again turned into party central when the energetic ensemble performed the everpopular “Shuvi” as well as “Rov Hashaot.” 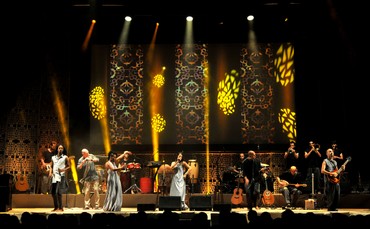 Idan Raichel Project at Ceaserea Amphitheater (Hadas Parush)Perhaps the most meaningful song for me was “Hitmakrut.” The song itself is just as good as the rest and the performance was as flawless as the others. What made it stand out was that it is a song in Arabic, and an entire mainstream Israeli audience was singing along. It might sound like a small thing, but this is not something to be taken for granted in a country where language is so much a part of identity. For those three minutes or so it was if the word’s conflict and division just didn’t exist in Israel. Powerful stuff.After a few more upbeat songs, the performers left the stage, only to come back on for an encore that started with “Hayim Pshutim.”The concert ended with “Milim Yafot Maele” and everyone in the crowd was sad that the unique experience they had just been through had come to an end.With songs sung in Hebrew, Spanish, Amharic, Portuguese and Arabic, the Idan Raichel Project proved that music is one of the best forms of communication out there.With all the singers taking part in each and every song, whether as a soloist or a backup singer, it’s inspiring to see how they are able to be just as passionate no matter what language they are singing in.It’s not just the singers who were full of passion. Each of the musicians played their important role in the very well-oiled machine. At some stage in the night, each and every one of them performed some sort of solo.If only everyone in the real world was as tolerant and inclusive as the Idan Raichel Project.The world would be a much better place.Follow @JPost_Lifestyle