The White City hosts its annual dusk till dawn festival.

By YONI COHEN
JUNE 26, 2013 19:42
white nights 370
(photo credit: Yossi Zweker)
Advertisement
It may have been a decade since Tel Aviv was named a UNESCO World Heritage Site, but that hasn’t stopped the city from celebrating. Since the declaration, which recognized 4,000 buildings created in the Bauhaus and International architectural styles, the Tel Aviv-Jaffa Municipality has celebrated every year in the best way it knows how – with a huge party. The annual White Night celebrations are an ode to the “non-stop city” that is Tel Aviv.As part of this year’s events, commercial establishments, cultural hubs, art centers and clubs throughout the city were open late, and outdoor performances were held until the wee hours. As always, the events were open to the public and free or cost a nominal fee.White Night highlights:The Hatikva market kicked off White Night with a party full of music and street theater, the market coming alive with dancers performing among the stalls, and the entire area filled with human statues and street performers. The stalls, shops and restaurants in the area are open until later than usual. Events began at 5:30 p.m.From 9 p.m. on, Summit Park in Old Jaffa was hosting an indie rock festival with performers such as Electra, Geva Alon, The Angelcy, Brigitte from France and Reines Girls.A huge Wi-Fi Headphone Party took place in Rabin Square from 8 p.m. to 11 p.m. Party goers were able to listen to the music though a smartphone application set up by Radio Tel Aviv 102 FM. Headphones were provided to those who didn’t bring their own. 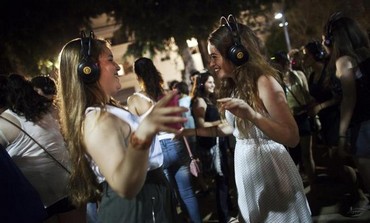 The Ozen Bar is hosting an evening dedicated to actor, singer and composer Shmuel “Shmulik” Kraus, who passed away this year. Various singers were to perform songs from Kraus’s album The State of Israel vs. Kraus Shmuel. As well as good music throughout the evening, The Golan Heights Winery is offering discounted prices on its Gamla range.As with every year, Rothschild Boulevard is hosting a huge street party throughout the evening, complete with live music, dance workshops and street performances.In the main plaza outside the Habima Theater, ballroom dance lovers could enjoy dancing from 8 p.m. to 11 p.m. with the band Nostalgia and soloist Yossi Darom. Everyone was welcome to tango, waltz, samba, cha cha and rumba, as well as many other types of dances.There was also be a Bollywood Dance Workshop at Gordon Beach.If an old-fashioned sing-along is more your thing, then check out the Shira Be’tzibur session at Hatahana Complex near Neveh Tzedek. Gabi Barlin was joined by the band The Tel Avivians for a performance starting at 9 p.m. From midnight until the early hours, Einat Sharuf is hosting a traditional sing-along session of Israeli songs.For those looking for something a little more risque, the Mossad Club in Florentin is hosting a sexy party called Kink Club from 11 p.m., featuring live shows catered towards adults. There is a strict dress code at the unique event, which is inspired by similar parties that are very popular around Europe.The Central Bus Station in Tel Aviv may seem an unlikely place to hold White Night celebrations, but the iconic building is hosting an evening full of street art, as well as a treasure hunt throughout the station. In addition, a large street art exhibition is being on shown on the seventh floor extends over 1,000 square meters of wall space. There are also various theater performances throughout the evening starting at 9 p.m.From midnight on, the stage of the Tel Aviv Opera House is coming alive with operatic performances from such works as La Traviata, Rigoletto, The Magic Flute, West Side Story, My Fair Lady and The Phantom of the OperaThere are also be activities for the whole family throughout the evening. Music performances for children, art workshops, light projections, and plenty of other activities are taking place in Bialik Square.As with every year at White Night, Hatzuk Beach in the north of the city is the location for a sunrise concert. The Metropolin pop band will get the crowd going with a concert starting at 1:30 a.m., with Yehudit Ravitz taking over until 5:30 a.m. Tel Aviv White Night on Twitter