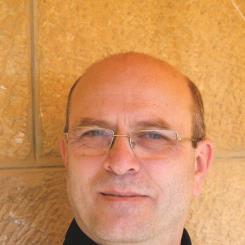 Award-winning journalist and bestselling author Amotz Asa-El, the Jerusalem Post's senior commentator and former executive editor, is a fellow at the Hartman Institute and a senior editor at the Jerusalem Report.

Asa-El's weekly column in the Jerusalem Post, Middle Israel, appears regularly for the 25th year now, and is a unique attempt to present in English mainstream Israelis’ view on anything, from politics and foreign affairs to business and religion. His five-part series in the Jerusalem Report (Aug-Sept 2017) about the future of the Jewish people won the Bnai Brith Journalism Award.

Asa-El's book Mitzad Ha'Ivelet Ha'Yehudi ("The Jewish March Folly," Yediot Sefarim, 2019), an revisionist history of the Jewish people's political leadership from antiquity to modernity, became a bestseller within a month of its publication. The book was praised by novelist A.B. Yehoshua as "convincing and accurate" and "reviving Jewish history with dramatic, literary scenes," and by Hebrew University philosopher Prof. Moshe Halbertal as "inspired writing that adds historic and intellectual depth to Israel's political debate."

Since joining the Jerusalem Post Asa-El has been a frequent commentator of Middle Eastern affairs on BBC, NPR, CNN and Israel TV, as well as a regular contributor to Dow Jones' MarketWatch, analyzing macro-economic, financial and social developments in Israel, the Arab world, Iran and Turkey. Asa-El has been quoted or published along the years by the New York Times, the Washington Post, the Wall Street Journal, the Economist, TIME magazine, the Daily Telegraph, the New Republic, Le Figaro, L'Express, Azure, Harvard Political Review, the Australian, the Australia Financial Review, Jornal do Brasil, the India Times, Politiken and others.

Asa-El holds graduate degrees in journalism from Columbia University, in Jewish history from the Hebrew University, and in Near Eastern and Judaic Studies from Brandeis University. He lives in Jerusalem with his wife Nurit and their three children. Follow @MiddleIsrael

How will history view Trumps's deployment of the 'lie'?

Can Israeli democracy be hijacked?

What Naftali Bennett must do to become Israel's next prime minister

Time is up for the ongoing, dangerous Likud and ultra-Orthodox liason

Comparing Ruth Bader Ginsburg and the Book of Ruth

Cry me a river

Emirati Crown Prince is this year's 'person of the year,' not coronavirus

Did World War II bring humanity peace, or are we back at square 1?

Gantz comes of age as a politician by countering Netanyahu's manipulation

The obsession with Rabbi Nachman and Uman is the new idolatry

At 20, Bashar Assad's rule is the shame of the Arab world