A exhibition from the Israeli Ministry of Science and Technology highlights the numerous Israeli innovations changing the world and propelling us to the future. 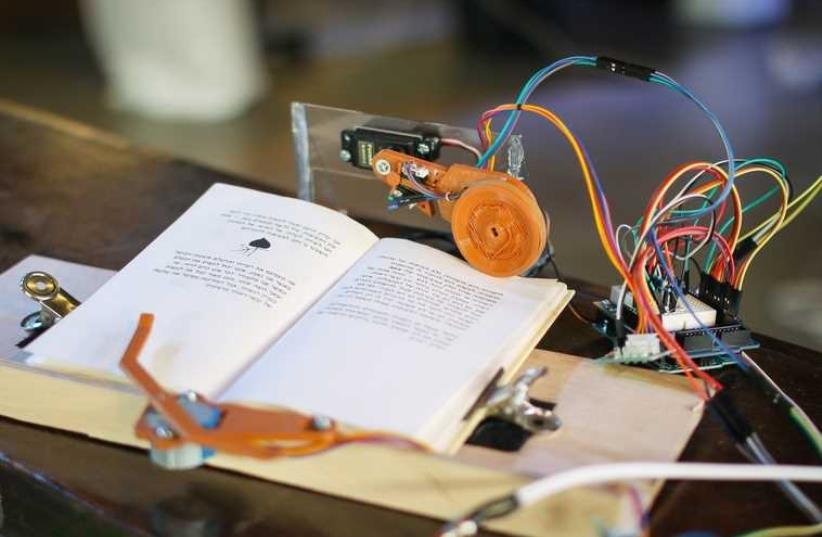 This system developed at a Tikkun Olam Makers (TOM) "make-a-thon" allows people who are paralyzed from the neck down to turn pages in a book.
(photo credit: JNS.ORG)
Advertisement
The Israeli Ministry of Science and Technology has launched a virtual exhibition highlighting dozens of Israeli discoveries and developments that have influenced the entire world. Medical breakthroughs, international awards and recognition, humanitarian advancements, and environmental and technological discoveries are just some of the categories showcased in the incredible collection which was previous on display at Israel's Ben Gurion Airport, and can now be explored virtually online.From Science and Technology Minister Ofir Akunis: "The exhibit is a major public diplomacy asset for Israel. We are showing the vast contributions of Israeli science and technology to the world and all humanity. We have what and who to be proud of. Israel is a pioneering country and innovative leader. The entire world admires, and is amazed by,  our achievements and we hope it will assist our ministry to promote and enlarge the international scientific cooperation with more countries."  Here's a sample of some of the incredible advancements featured in the exhibit:1. Turning algae into Heart Tissue

Repair of Heart Tissues from algae. Photo: Dani Machlis
Developed by Prof. Smadar Cohen at Ben-Gurion University of the Negev, "the research led to novel products for treating heart attacks and repair of both cartilage and bone." Read more... 2. Reviving Biblical Wine

Developing Modern Wine from Vines of the Bible. Photo: Roei Greenberg
"The researchers obtained DNA from scores of vine remnants found in archeological digs in Israel and compared them with a collection of local Israeli varieties they had collected in recent years." Read more...3. Drip Irrigation Technology

Drip Technology. Photo: Moshik Brin
"This groundbreaking technology delivers precise drops of water and nutrients directly to the plant’s roots rather than the surrounding soil. Due to its precision, drip technology significantly saves on both water and land resources, while increasing crop quantity and quality." Read more... 4. Flying Peacefully with NatureThere are over 500 million birds that migrate through Israel each year, but this is no longer an issue for the Israeli Air Force. "The researcher mapped the precise migration routes, heights and arrival dates of the birds for the fi­rst time ever, using radar, a motorized glider, drones and a network of birdwatchers, and made possible the planning of alternate air routes." Read more...   5. Sni­ffPhone: Mobile Disease Diagnostics

Photo: Roei Greenberg
"The system is a pipeline technology that promises a rapid and noninvasive diagnostic tool for cancer and other diseases." Read more... 6. Creating the healthiest (and most delicious) tomato varieties

Cherry Tomatoes. Photo: Roei Greenberg
"They developed prolific new cherry tomato varieties that are economically viable as an agricultural product, with a long shelf life and an exceptional taste that appeals to people all over the world." Read more... This article was written in collaboration with Israel Ministry of Science & Technology