"This is a significant breakthrough in the field that caused severe environmental pollution that influenced both Israeli residents and Palestinian residents." 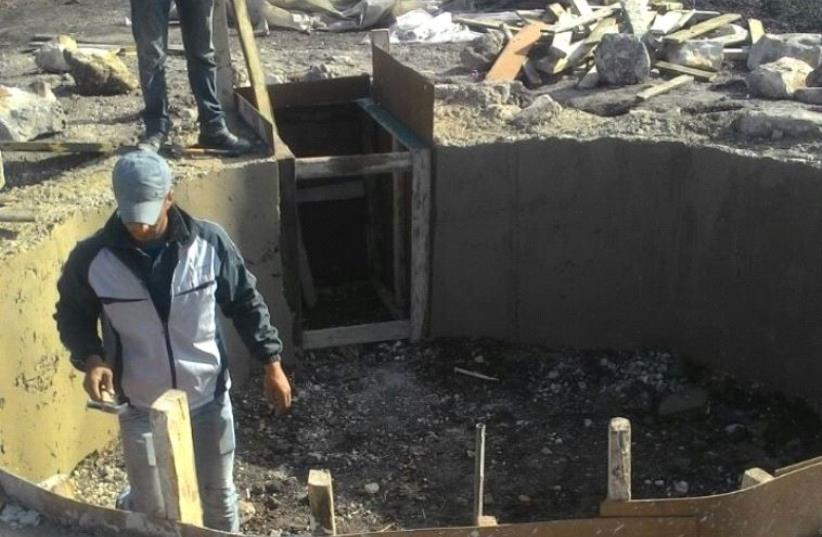 Building the new coal plant.
(photo credit: COGAT SPOKESMAN)
Advertisement
In order to minimize the enormous amount of air pollution generated by unregulated West Bank charcoal kilns, Israeli and Palestinian authorities are establishing a modern production factory in the northern West Bank.Construction of the plant, which is expected to be complete in two weeks, will lead to a more environmentally sound solution to a pollution problem that has long tainted the air in the region. As a result of ongoing dialogue between Israeli and Palestinian officials, as well as continued enforcement activities, operation of the old charcoal kilns and the burning of woods scraps in the region has ceased almost entirely, according to the Office of the Coordinator of Government Activities in the Territories.“This is a significant breakthrough in the field that caused severe environmental pollution that influenced both Israeli residents and Palestinian residents,” COGAT said.The modern factory – located in the village of Yabad, near Jenin – is expected to produce 20 times the amount of charcoal that was generated from the old kilns, while also reducing costs and production time. At the conclusion of the joint activities in the sector, about 15 such modern facilities are expected to be operating.“This is the end of the era of charcoal kilns,” said COGAT Maj.-Gen. Yoav Mordechai. “The way charcoal kilns are operating today cannot continue anymore.”In early November, Mordechai and Civil Administration head Brig.-Gen. Achvat Ben-Hur met with Palestinian officials and charcoal kiln operators, determining that the Civil Administration would lead the effort to install modern factories.Midway through the month, the Civil Administration also conducted an unprecedented enforcement operation, shutting down many of the polluting kilns in the Area B region of the West Bank. As part of that operation, officials seized tools, equipment and 160 tons of wood used for charcoal production, COGAT said at the time.Such enforcement activity is rare in Area B of the West Bank, where Israel retains security control but leaves civil to the PA.Reports published in recent years have indicated that 25% of children in Yabad suffer from respiratory problems as a result of the charcoal production and that 70% of workers in the charcoal industry have either respiratory illnesses or cancer, according to information from COGAT.In addition, a 2007 study conducted in Yabad showed that the number of deaths associated with respiratory diseases and cancer were significantly higher than in other villages.Not only has the charcoal burning impacted the Palestinian villages in the immediate region but also the Israeli areas of Pardes Hanna and Karkur, as well as the Menashe Regional Council across the Green Line, according to the Environmental Protection Ministry.“The new model we are talking about is better and more economically profitable,” Ben-Hur said. “This step is a significant milestone in the program, led by the Civil Administration, to stop polluting charcoal activity in the villages of northern Samaria.”While Palestinians have been producing the charcoal, Israelis have often been party to the process. For years, Israeli farmers have been shipping their trimmed foliage to the PA’s charcoal businesses rather than disposing of it in an authorized manner.To solve the Israeli side of the problem, the Knesset Internal Affairs and Environment Committee approved regulations in early November to prohibit the conveyance of such wood scraps to the West Bank. The regulations will require Israeli farmers to pulverize the branches themselves or pay for their disposal at authorized sites.Both the mid-November enforcement operation and the new regulations are linked to a comprehensive plan, led by the Environmental Protection and Agriculture ministries, to put an end to the haphazard charcoal production in the region.Other efforts promoted by the ministries have included incentives for Israeli farmers to purchase large wood pulverizers and a public appeal to establish an environmentally friendly plant.The Environmental Protection Ministry has also called for the construction of a factory to produce biomass pellets from tree scraps.