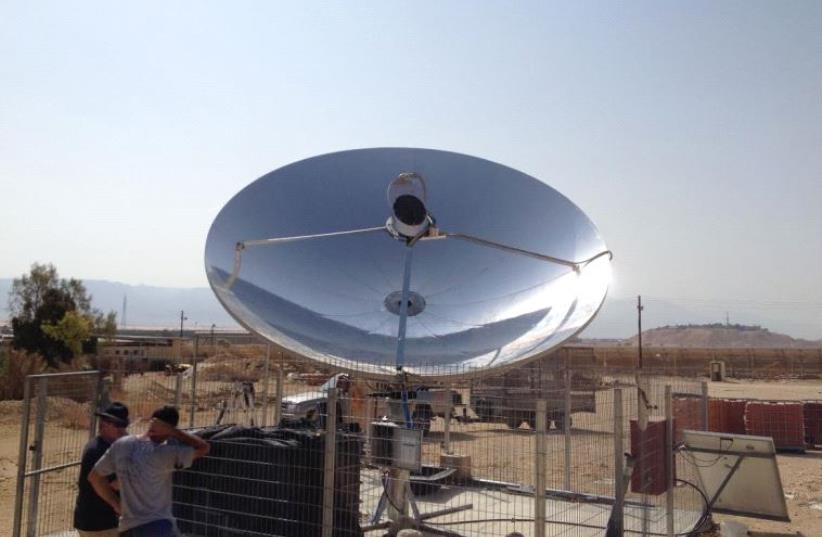 The SunDwater system at Kibbutz Ketura
(photo credit: SUNDWATER)
Advertisement
Remote villages around the world that lack access to both electricity and potable water may soon be able to quench their thirst, with the development of an Israeli solar powered water distillation system. The Jerusalem-based SunDwater, whose standalone system harnesses heat through concentrated solar power, now has two fully operational pre-production models purifying water in the Arava Desert. The hope is, according to CEO Shimmy Zimels, to market the relatively low maintenance system to small villages in South America, Africa and Asia, ideally by means of aid organizations.  “You would reduce dramatically the mortality rate in those places, specifically among the young, who suffer the most from the lack of freshwater,” Zimels told The Jerusalem Post on Wednesday. “Today, these people spend the vast majority of their time on the quest for water,” he said, noting how much time is wasted in walking to the nearest supply. “They could invest that time in building a better future for their families."Along SunDwater’s journey to build a distillation system, the company had four main objectives in mind, Zimels explained. These goals included creating a system that could process as many types of unsafe water as possible, remain sustainable, produce substantial quantities of water and did not involve sophisticated infrastructure, he said. "There are many solutions out there that you can take water and put it through the system and you'll get out 2, 3 or 4 liters of water, and it doesn't have any value for the people who are going to utilize the solution,” Zimels said. The system works by pumping any source of contaminated water through one pipe into the top of a parabolic dish, which follows the sun throughout the day. The rays that hit the dish are then reflected back onto a water boiler that sits in the dish’s center, Zimels explained. As the boiler heats up the contaminated source, the water evaporates, leaving the pollutants behind.  Pushed out of the boiler with pressure, but remaining in a closed system, the vapor is then recondensed back into cleaner water, according to Zimels. All in all, depending on the temperature, the sun’s reflection and the water source, the $16,000 system is able to generate about 300-400 liters of water daily, he said.  A control console manages the whole process, collecting data, providing remote access, checking contaminant levels and performing automatic cleaning, Zimels added. While there are other companies marketing solar powered purification systems, Zimels said that what makes SunDwater stand apart from these firms is the technology’s ability to distill – rather than simply desalinate – all kinds of contaminated water. In addition, the other systems typically use solar panels to generate electricity and charge batteries to run the process, he added. "We basically take water and heat it up by solar power – we generate very little electricity for our needs, just for the pump and the computer,” he said. “Other than that, the system is fully based on the heat and not the electricity." After launching an initial model in Haifa, SunDwater established an official “alpha” version of the system in Kfar Adumim, near the Dead Sea, about three years ago. The company then launched a third rendition of the facility near Ben Gurion Airport, before heading to the Arava Desert to unveil today’s full-scale pre-production systems.  The first of the two pre-production systems began running about five to six months ago at the Eilat-Eilot Renewable Energy Initiative’s Off-Grid Village at Kibbutz Ketura, where the company is testing the technology in conjunction with the Arava Institute for Environmental Studies and a student from Ben Gurion University.  SunDwater also established a second such system at the nearby Kibbutz Samar about two months ago, Zimels said. One issue the company faces with getting the technology to its intended destinations is the fact that most communities that would benefit from the system lack the money required to acquire it. Zimels said that he and his partners are therefore hoping that aid organizations, NGOs, governments and entrepreneurs interested in selling water will be interested in the technology. At the moment, he said the company is contact with dozens of potential partners around the world. "Our main targets are South America, Africa, and in Asia, we're talking specifically about the countries suffer from scarcity – India, Bangladesh and Vietnam,” Zimels said. “I have people talking to me from California and New Mexico also.""For us the challenge is to find the right partner, who is willing to take the system and test it,” he added.The company hopes that such tests can occur at local beta sites, such as churches, missionaries and social organizations willing to give the system a try, Zimels explained.“Once they get the water outcome, I think they will be excited with the results,” he said.