Israeli start-up extracting water from air, around the world

Water Gen tech works in remote locations, and where pipes are no longer safe. 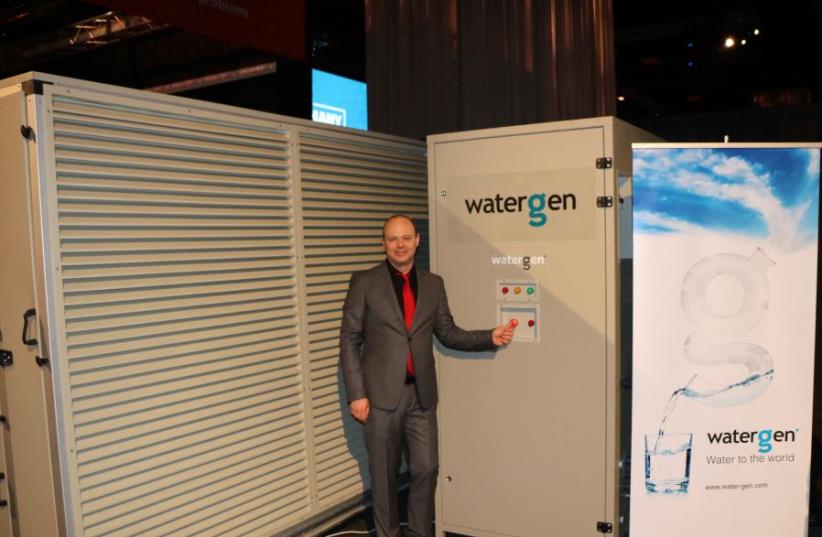 Maxim Pasik, executive chairman of Water Gen
(photo credit: COURTESY OF WATER GEN)
Advertisement
From the remote corners of India to the palm-lined streets of Miami-Dade County, one Israeli company is aiming to do the unthinkable – extract safe, inexpensive potable water from the air we breathe.“We created a product that can really be the next source of drinking water,” Maxim Pasik, executive chairman of Rishon Lezion-based Water Gen, told The Jerusalem Post on Thursday.Water Gen made headlines at the AIPA C Policy Conference in Washington two weeks ago, when Prof. Alan Dershowitz presented the company’s GENius device, generating water out of thin air on stage.Just days earlier, the company had signed a memorandum of understanding to install its technology in Vietnam’s capital city, while days later, the firm inked another memorandum with India’s Vikram Solar Pvt. Ltd., to deploy solar powered Water Gen units in remote parts of the subcontinent.“All these countries that have the water shortages have a humid and hot climate,” Pasik told the Post. “We take all the humidity from the air and extract the water.”The memorandum of understanding signed with the Hanoi Department of Construction calls for the construction of a Water Gen factory, to produce industrial-scale water generators for the municipality, with a total capacity of up to 10,000 liters of water per day, Vietnamese news sites reported.“Our solution is 20 times cheaper than the solution for drinking water that they have,” Pasik said. “[And] what they drink is not healthy.”In India, the memorandum inked between Water Gen and Vikram Solar enables the latter to manufacture and distribute the Israeli company’s products, incorporating solar power to fuel the water generation process in remote locations.Yet Water Gen’s reach is by no means limited to the developing world. The products have recently generated interested in several Gulf countries, in Egypt, in Mexico and across the United States, Pasik said. In the US, Water Gen is operating a pilot study in Miami-Dade County and is in talks with various entities in California, Chicago and Michigan, he added.While most of these places do have access to clean water, many are beginning to experience strain on their aging pipes, requiring shipments of bottled water to residential neighborhoods, Pasik explained.“We can solve this problem,” he said. “They can put our home devices inside people’s houses and they will have water.”Water Gen’s technology aims to provide clean, drinkable water to consumers regardless of the infrastructure leading to their homes, according to Pasik.“This is really the next source of water,” he said. “Desalination plants are good when you have good pipes. If you have bad pipes it doesn’t matter how much good water you put in the pipes.”The GENius technology works on-demand by trapping the humid air inside the device, then cleaning and drying the air and extracting the now clean water, Pasik said.Because the heat exchanger is made from plastic rather than aluminum, as has been typical in other such mechanisms to extract water from air, the system is much more affordable, he said. Generating 1 gallon (3.785 liters) of water requires only 1 kilowatt of energy, he added.The system is available as a large-scale industrial water generator, a medium-scale model and the “GENNY” home appliance for household use.Pasik said seeing his company’s technology generate a potable resource around the globe is critical, as “water is the next oil for the world.” About 1.7 million children under the age of five die every year due to water scarcity issues, he said.“There’s nothing more important in the world than water,” he said. “People cannot live without water.”Pasik said that in the future, technologies like Water Gen’s devices will have the capacity to prevent wars and foster peace, in regions where people are fighting for access to clean water.“It’s very important that this kind of solution comes from Israel,” he said. “This is kiddush Hashem [sanctification of God’s name] and tikkun olam [repairing the world].”As an investor in sustainable technology solutions, Pasik also serves as executive chairman at a variety of other Israeli and international companies, including the Ramot Hashavim-based Vertical Field and partner Green Wall Israel, which focus on building natural gardens on vertical surfaces.“The biggest problem in the world is drinking water and the second is pollution,” he said, “We don’t have a place in the city to put trees.”A 1,000-meter vertical field is equivalent to 50 trees, each 15 meters tall, which would take many years to grow, Pasik explained. Today, Green Wall is carry out several municipal pilots around the world, in Israel, India, China, the US, Mexico and Europe, he said.While Vertical Field and Green Wall can provide critical solutions to dense urban communities plagued by air pollution, Pasik stressed that solving the world’s water scarcity problem is still his top priority.“Two-thirds of the world has drinking-water problems,” Pasik said. “This is a humanitarian issue. We would like to maintain peace between people and save people’s lives. The project itself is priceless and is huge.”