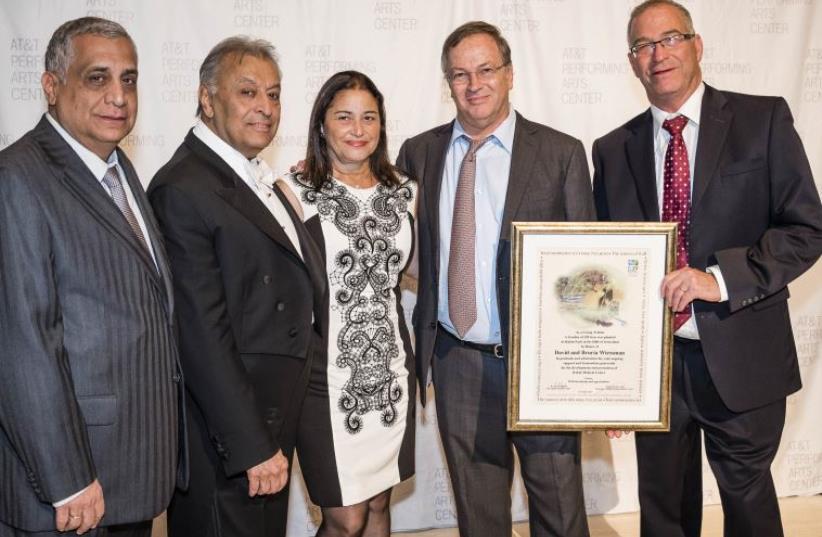 TEXAS GALA: Posing from left to right at the festive fundraiser in Dallas last week are Africa Israel’s Pini Cohen, IPO conductor Zubin Mehta, Bruria and Dudi Wiessman, and Dr. Eyran Halpern, director of the Rabin Medical Center, holding a certificate presented to him by the Weissmans
(photo credit: Courtesy)
Advertisement
Israeli businessman and philanthropist David (Dudi) Wiessman hosted a festive fund-raising evening in Dallas, Texas, last Wednesday that paired the Israel Philharmonic Orchestra and Rabin Medical Center- Beilinson. Wiessman, who is currently based in Texas, and his wife, Bruria, are huge supporters of both institutions. Some 1,500 guests attended the successful event, which raised some $300,000 for the IPO and Beilinson.Dr. Eyran Halpern, director of the Rabin Medical Center (comprising the Beilinson and Sharon hospitals), said the event was “filled with music and benevolence.”“The people of Dallas thoroughly enjoyed this pro-Israel evening,” he said. “In the current political and security situation in Israel, nothing warms the heart more than identification, empathy and support.”Halpern praised Wiessman, a former president and CEO of the Alon Group, as “a cherished friend of the hospital who has stood by our side for many years.”“In the difficult reality of the health system in Israel, which experiences a continuous lack of financing, we have succeeded in continuing the hospital’s development only thanks to generous friends like Dudi,” he said. “Donations for us are like a breath of fresh air, and without them, we wouldn’t succeed in keeping pace with the current moment of construction, at a cost of hundreds of millions of shekels.”The hospital is currently raising money for the expansion of the Davidoff Cancer Center and the National Transplant Center as well as the construction of a new hospital tower.
Sign up for the Health & Wellness newsletter >>