Armenians praise comments by Pope Francis calling the massacre of up to 1.5 million of their compatriots 100 years ago "the first genocide of the 20th century", saying they hope other world leaders will follow suit. 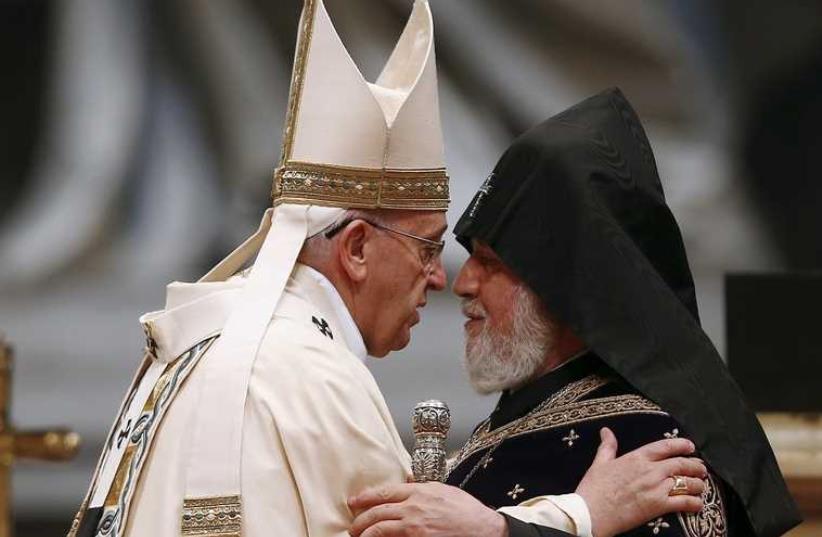 Pope Francis (L) embraces Catholicos of All Armenians Karekin II during a mass on the 100th anniversary of the Armenian mass killings, in St. Peter's Basilica at the Vatican
(photo credit: REUTERS)
Advertisement
Armenians praised recent comments by Pope Francis in which he called the massacre of up to 1.5 million of their compatriots 100 years ago "the first genocide of the 20th century."Muslim Turkey accepts that many Christian Armenians died in clashes with Ottoman soldiers beginning in 1915, when Armenia was part of the empire ruled from Istanbul, but denies hundreds of thousands were killed and that this amounted to genocide.At an Armenian rite Mass in St. Peter's Basilica on Sunday (April 12) to mark the 100th anniversary of the mass killings, Francis became the first head of the Roman Catholic Church to publicly pronounce the word "genocide" to describe them.Armenians said strolling through the streets of the capital, Yerevan, on Monday (April 13) voiced their approval."I view it as very positive the fact that the Pope admitted that the genocide of Armenians in the Ottoman empire was the first genocide of the 20th century. I think that the Pope Francis the First is a very good Christian and he acted in a Christian way when he admitted that the genocide of Armenians has taken place," said a young man, a Yerevan resident, who declined to be named."It is the first time in history that Armenians, the entire Armenian people finally could declare themselves at such a great event and I am glad that the Pope received our ambassadors such as our president, Catholics, and I was amazed by the atmosphere there and as an Armenian I was very pleased that finally we were able to show to the whole world the true picture," said another Yerevan resident.Francis's comments were also published by Armenian President Serzh Sarksyan's office on Sunday.Armenian MP Tevan Poghosyan said he hoped the Pope's statement would be followed by other countries, including Turkey."I believe that one day Turkey would also be on the list of the countries who would be recognizing Armenian genocide and on that day I hope that we really start to build a reconciliation and peace in our region," said Poghosyan.But Turkey's initial reaction was to protest. "The pope's statements, which are far from historical and judicial facts, cannot be accepted," Foreign Minister Mevlut Cavusoglu said on his Twitter account.Political analyst Karen Bekaryan is convinced that Vatican's recognition of genocide will be followed by many countries."This is a world action, it is not an action by just the Vatican or the Pope, it is rather worldwide action and in this regard of course now we will wait for the reaction of many countries," Bekaryan said.Some European and South American countries use the term to describe the killings, but the United States and some others, keen to maintain good relations with an important ally, avoid doing so.Francis also urged reconciliation between Turkey and Armenia, and between Armenia and Azerbaijan over the disputed Caucasus mountain region of Nagorno-Karabakh. The appeal came in a letter handed out during a meeting after the Mass to Sarksyan and the three most important Armenian church leaders present.sign up to our newsletter