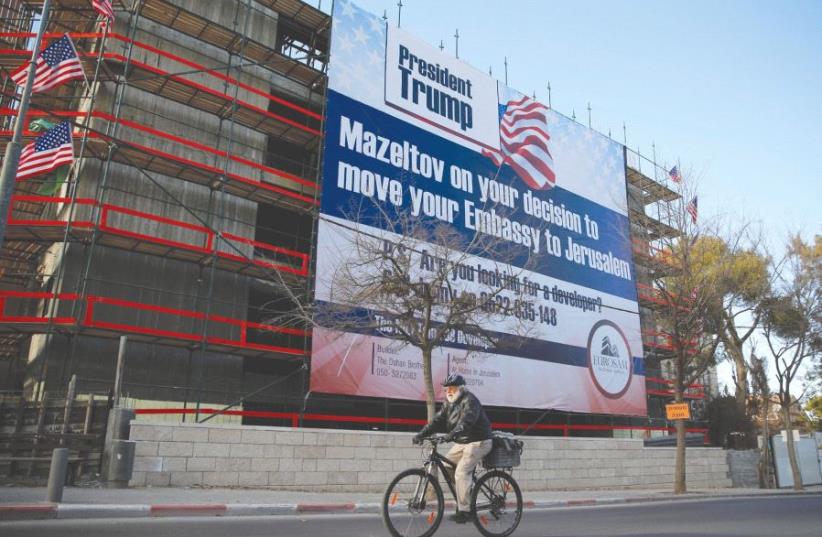 A SIGN calls on US President Donald Trump to move the US Embassy to Jerusalem.
(photo credit: REUTERS)
Advertisement
In 1947, the nations of the world were ready to give Jerusalem away. Instead of handing it over to Jewish rule, United Nations Resolution 181, known as the Partition Plan, proposed making the Holy City an international city, establishing a special international regime with free access for everyone to all the holy sites inside. The original plan, which recommended the creation of a Jewish state and an Arab state in Palestine, didn’t really work out for them. After the 1948 War of Independence, the Jordanian occupation of the eastern portion of the city meant that no Jew could go visit the Western Wall (the closest accessible place to Judaism’s holiest site) for a period of 19 years, until Israeli forces liberated the area in the Six Day War.   The April 3, 1949 armistice agreements had specified that Israelis would have access to the religious sites in East Jerusalem, but in reality, Jordan refused to implement the clause. On top of that, Jordanian forces destroyed the Jewish Quarter and dozens of synagogues, as well as expelling the Jewish residents.There were many good Christians who had helped to formulate the Partition Plan, such as Stanley Grauel, a Methodist minister credited with giving crucial testimony to the UN committee tasked with drawing up the plan. But when it came to Jerusalem – while it is certain that these nations’ intentions were good by trying to maintain the delicate situation in the region – their judgment turned out to be lacking a biblical tint to it. After all, the Jewish people were indeed in need of a refuge after the Holocaust, and it was clear that if the Western, Christian world could let a Holocaust happen then it quickly needed to so something to make amends for it. But the proof of them being the original Israel, the one that God never left, had still yet to be proven. If that were the case, then Jerusalem would stay in neutral hands until the real Israel would stand up. Fifty years ago, however, the biblical proof came to life. The Six Day War and the liberation of Jerusalem and Judea and Samaria was an undeniable event of biblical proportions. Everyone began asking themselves questions, including the ever-conservative Catholic Church, which began to look for a replacement for replacement theology. The facts were starting to become clearer: the People of Israel were coming alive again, just as Ezekiel prophesied in chapter 37 of the book bearing his name.  Fifty years after the fact, while it has become almost universally accepted in the Christian world that the Israel of today is the Israel of the Bible, one equation continues to be distorted. If the modern People of Israel are a continuation of the ancient biblical People of Israel, then shouldn’t the capital of the modern State of Israel be the same as the ancient Kingdom of Israel?Now 70 years after the vote on the Partition Plan, the leader of the Western, Christian free world is being given another chance to make amends, the chance to declare that Jerusalem belongs to the People of Israel, the nation’s eternal capital that will never part from them again. And it shouldn’t be a difficult task for US President Donald Trump. Because all he has to do is nothing. Six months have passed since Trump signed a waiver on June 1, 2017 to delay moving the US Embassy to Jerusalem from Tel Aviv. The second waiver deadline occurs on December 1.Six months have passed since that waiver, and it’s now been more than a year since he first made that promise during his election campaign. But it’s still very fresh in the minds of Christian-supporters of Israel. Another very fresh promise that stands out came from his second-in-command, Vice President Mike Pence. At the 12th annual CUFI summit in Washington this summer, Pence made the administration’s opinion well known. “To the men and women of Christians United for Israel, this president hears you. This president stands with you,” he said. “And I promise you that the day will come when President Donald Trump moves the American Embassy from Tel Aviv to Jerusalem. It is not a question of if, it is only when.” And only on Tuesday, Pence’s remarks on November 28, 2017, at an event at the UN marking the Partition Plan, again mentioned that Trump is “actively considering when and how” to move the embassy to Jerusalem. So, when exactly is that “when”? When Trump connects to his biblical roots, the decision will be obvious.
Sign up for our Christian World newsletter >>