Israelis who hate Israel—and the Christians who fund them 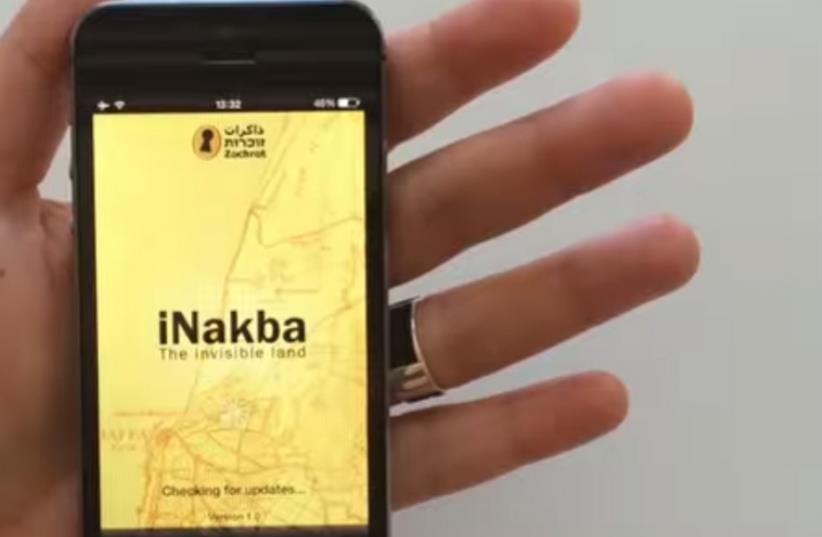 The Zochrot “iNakba” app, whose goal is to delegitimize Israel.
(photo credit: JNS.ORG)
Advertisement
While most Israelis celebrated 67 years of independence last week, a fringe Israeli non-governmental organization (NGO) hopes this year will be the last for the Jewish state. Zochrot, a tiny radical anti-Zionist group, was established with the aim of “rais[ing] public awareness of the Palestinian Nakba (“Catastrophe” in Arabic)” and “recognizing and materializing the right of return,” an agenda equivalent to calling for the abolishment of Israel as the nation-state of the Jewish people. With no local support base or constituency, Zochrot operates only through generous funding from a coterie of foreign Christian aid organizations.  Using church funds, Zochrot promotes a “de-Zionized Palestine,” meaning free of Jews. The group’s founder, Eitan Bronstein, advocates for Jews to abandon Israel en masse. He dreams of a time “when the refugees return, Jews will become a minority in the country… There may be Jews, most of them of European origin, who won’t be able to adjust to a non-Zionist reality, and prefer to use their other passport to move elsewhere.”Last month, together with Palestinian NGO BADIL, Zochrot embarked on a speaking tour across the U.S. to promote the “historical overview of the Nakba and the Right of Return.” Several years ago, BADIL awarded a prize to a blatantly antisemitic cartoon, featuring a grotesque caricature of a Jewish man standing over a dead Arab child and holding a pitchfork in the shape of a menorah dripping with blood. BADIL’s anti-Semitic history apparently does not concern Zochrot or its funders.Last year, Zochrot commemorated Israel Independence Day by launching a smartphone app called “iNakba” to delegitimize the Jewish state. The app, an interactive map and photos of Palestinian Arab villages from pre-1948, was featured by The New York Times, proving the real influence of a small fringe group armed with millions of shekels of foreign funds. A year before, in 2013, Zochrot hosted a costly Tel Aviv conference titled “From Truth to Redress: Realizing the Return of Palestinian Refugees.”  These activities would ordinarily be out of reach for a group its size. But, due to the largesse of nine European Christian aid agencies, Zochrot does not lack resources. Foreign funding for 2014 and first quarter of 2015 totals NIS 2,892,665 (about $740,000). Of that, some NIS 2,726,917—about 93 percent—comes from the Christian charities.  These charities, both Catholic and Protestant, receive funding grants from their respective governments, mostly European. The charities are Bischoefliches Misereor (Germany), Broederlijk Delen (Belgium), Christian Aid (U.K.), Finn Church Aid (Finland), HEKS-EPER (Switzerland), ICCO (Netherlands), Trócaire (Ireland), the Mennonite Central Committee (Canada), and the United Church of Canada (Canada).  That these Christian groups support the abolishment of Jewish Israel is deeply troubling. The modern Zionist movement emerged in response to 19th-century anti-Semitic pogroms often caused by the anti-Jewish incitement of Christian clergy. Israel was subsequently established in the immediate aftermath of the Holocaust, the road to which was pave by centuries of anti-Semitic Christian teachings. Following the Holocaust, a number of the world’s leading Christian theologians began a comprehensive reconsideration of Christianity’s attitudes toward Jews and Judaism. They undertook a process of renouncing and reformulating centuries of Christian teachings that led to anti-Jewish violence over the centuries.   Yet in the last two decades, some churches have partnered with anti-Israel activists to reverse these theological reforms, by introducing a “Palestinian liberation theology”—a fusion of Palestinian nationalism and Christian theology. This ideology seeks to undermine Jewish claims, religious or historical, to sovereignty in any and all parts of the Land of Israel.  Zochrot serves as perfect window dressing for this theological onslaught on the right of the Jewish people to sovereign equality. Without its Christian backers, Zochrot and its pernicious agenda would cease to exist.Yitzhak Santis is chief programs officer of NGO Monitor, a Jerusalem-based research institute.
Sign up for our Christian World newsletter >>