Archaeologists say structures were built in the Byzantine period beside the ancient road leading between Jerusalem and the coastal plain. 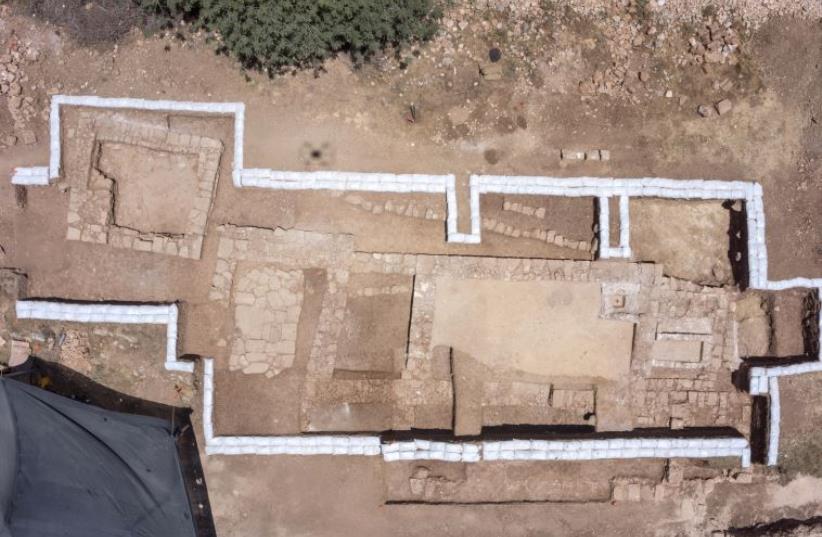 Ancient church discovered near Jerusalem
(photo credit: SKYVIEW, COURTESY OF THE ISRAEL ANTIQUITIES AUTHORITY)
Advertisement
Archeological excavations near Highway 1 – at the entrance to Abu Gosh, west of Jerusalem – uncovered a large Byzantine-era road station that included a church.The excavations were conducted while upgrading and widening the highway between Jerusalem and Tel Aviv in a project initiated and funded by Netivei Israel - National Transport Infrastructure Company, Antiquities Authority spokeswoman Yoli Shwartz announced on Wednesday.The road station and church were found adjacent to a deep spring known as Ein Naka’a, located on the outskirts of Beit Nekofa, said Shwartz.“The current excavation season uncovered a church measuring about 16 m. in length,” she continued. “The church includes a side chapel 6.5 m.long and 3.5 m. wide, and a white mosaic floor. A baptisterium in the form of a fourleafed clover, symbolizing the cross, was installed in the chapel’s northeast corner.”The four-leafed clover bapisterium found at the ancient church (photo credit: ANNAT NAGAR, COURTESY OF IAA)Shwartz added that fragments of red-colored plaster found in the rubble strewn throughout the building illustrated that the church walls had been decorated with frescoes.“To the west of the church were rooms that were likely used as dwelling quarters and for storage,” she said, noting that one of the rooms contained a large quantity of pottery tiles.“The excavations yielded numerous different finds, testifying to intensive activity at the site,” Shwartz added.“These included oil lamps, coins, special glass vessels, marble fragments, and mother-ofpearl shells.” 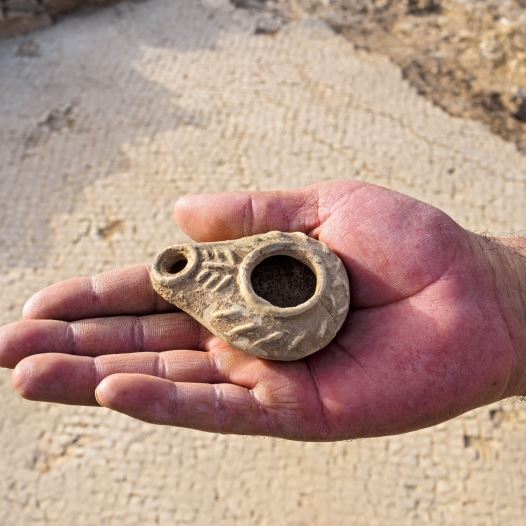 Ancient oil lamp discovered in church near Jerusalem (photo credit: ASSAF PEREZ, COURTESY OF IAA)According to Annette Nagar, director of the excavation on behalf of the authority, the road station and its church were built in the Byzantine period beside the ancient road between Jerusalem and the Coastal Plain.“Along this road, which was apparently already established in the Roman period, other settlements and road stations have previously been discovered that served those traveling the route in ancient times,” said Nagar.“Included in the services provided along the route were churches, such as the one recently uncovered at the entrance to Abu Gosh.”Nagar added that other churches have been discovered in the past in Abu Ghosh, Kiryat Ye’arim, and Emmaus.“This road station ceased to be used at the end of the Byzantine period, although the road beside it which was built was renewed, and continued to be in use until modern times,” she said.Meanwhile, Pablo Betzer, the authority’s district archeologist for Judea, said the findings have been documented and will be closely studied.He added that the authority and Netivei Israel will work together to preserve the site for future generations.
Sign up for our Christian World newsletter >>