Thousands of Christians flock to Jerusalem for Pentecost

The largest event, held by the evangelical organization Empoqwered21, will host thousands of Christians from over 70 countries at the Jerusalem Pais Arena. 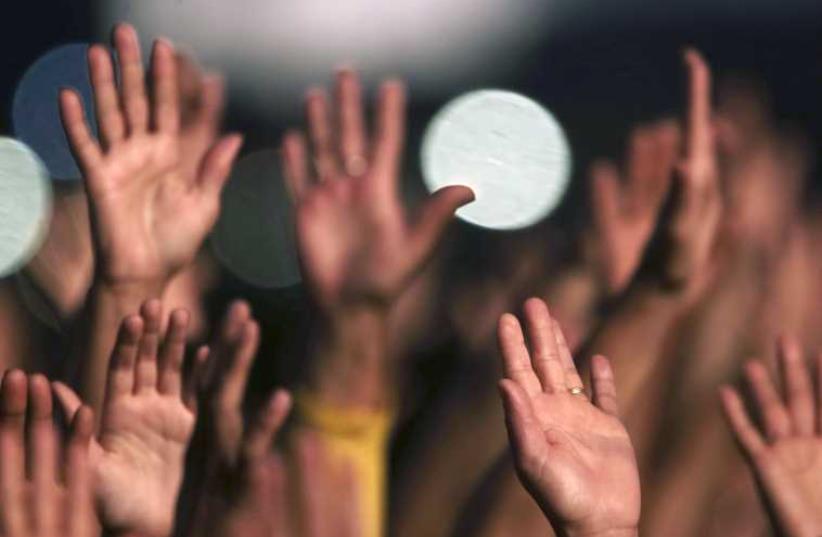 Evangelical Christians worship during the "Jesus Parade" in downtown Brasilia August 14, 2014.
(photo credit: REUTERS)
Advertisement
Droves of Christians will flock to Jerusalem over the coming days to celebrate the Pentecost at both a mega-event at the Jerusalem Pais Arena as well as in smaller venues, for what some say could be the largest celebration of the Pentecost in Israeli history.Catholics and Jews alike will commemorate the Feast of Weeks, a prominent feast in the calendar of ancient Israel celebrating the giving of the Law of Sinai. In Christianity it has become a feast commemorating the descent of the Holy Spirit upon the apostles, as well as other followers of Jesus Christ, now known as the Pentecost. Many Christians describe the holiday as ‘the birth the Church.”Similarly, the Jewish holiday of Shavuot celebrates the giving of the laws to the Jewish people from Mount Sinai. Because of the holiday’s similarities, they are held the same weekend.The largest event will be held in the 11,600 seat Jerusalem Pais arena, a five-day Global Congress sponsored by the evangelical organization Empowered21. According to the organization, the event will draw thousands of participants from over 70 nations, all gathering to celebrate the Pentecost and Shavuot from May  20-25th.“This is a pivotal moment in history for the global Spirit–empowered movement,” said Empowered21 President and Global Co–Chair William M. Wilson. “The Impartation service, which will pass the mantel of the global Spirit–empowered movement on to the next generation, is of particular significance. Our prayer is that this service will be a catalyst, igniting the hearts and minds of young people from around the globe with the fire of God’s love and power.”Over the course of the events, 130 speakers will address the crowd. A South Korean delegation from the Manimin church in Seoul led by Dr. Jaerock Lee.  The pro-Israel church brings along a local Dane group that will perform, prior to a group prayer session.Smaller events will be held throughout the city, including a conflicting event being held at the Tomb of David in Jerusalem, which will host both Catholics and Jews this Sunday to celebrate the Pentecost and Shavuot, respectively.Organizers and officials at the tomb worry that the two religious groups will find themselves in competition for space for worship. Additionally the volume of people attending the two simultaneous brings into question various security concerns.Other celebrations for the event will be held throughout the Jerusalem on Sunday.sign up to our newsletter