Orthodox Christians mark Easter Sunday with a procession in the old city of Jerusalem and in Gaza city. 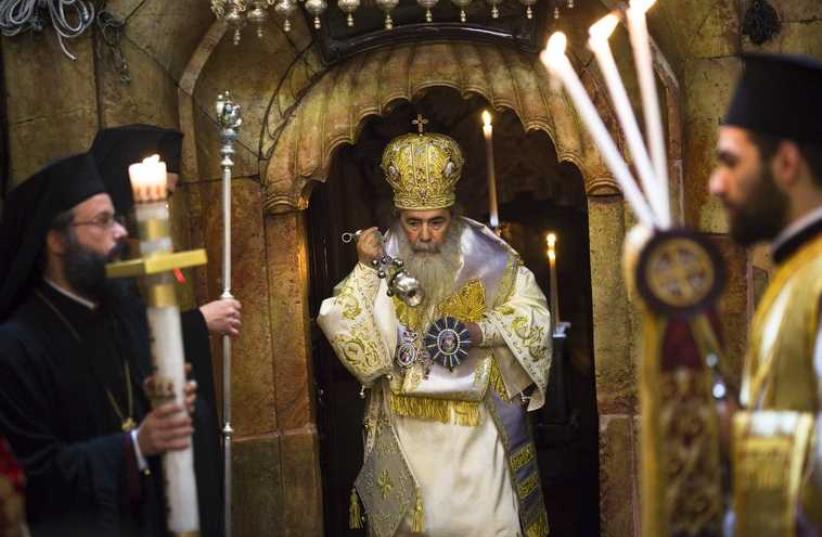 Greek Orthodox Patriarch of Jerusalem Metropolitan Theophilos (C) takes part in the Easter Sunday mass procession inside the Church of the Holy Sepulchre in Jerusalem's old city
(photo credit: REUTERS)
Orthodox Christians marked Easter Sunday with a procession into Jerusalem's Holy Sepulchre and Sunday mass at an Orthodox church in the Gaza Strip.Thousands of pilgrims walked towards the church in the Old City, the faith's most sacred site in Jerusalem, for a festive mass to mark the resurrection of Jesus. The Church is believed to be the site where Jesus was crucified, buried and resurrected.The Greek Orthodox Patriarch Theophilus III made his way from the Greek Orthodox Patriarchate to the church where he performed the mass.In the Hamas-ruled Gaza City, a small community of Palestinian Christians gathered by the small local church where they held prayers, sang hymns, and lit candles during the religious celebration."We send our greetings to the Palestinian people, Muslims and Christians on this day, the resurrection of Jesus. When Jesus came back to life from death, in Jerusalem," Head of Religious Relations at the Orthodox Church of Gaza, Jaber al-Jaldeh, said.The Easter holiday culminates on Easter Sunday when Christians believe Jesus rose from the dead, three days after being crucified.