By JPOST.COM STAFF, REUTERS
FEBRUARY 3, 2013 17:21
Turkish Prime Minister Recep Tayyip Erdogan_311
(photo credit: Reuters)
Turkish Prime Minister Recep Tayyip Erdogan on Sunday condemned the alleged Israeli strikes in Syria last week, while at the same time questioning Iran's involvement in the Syrian crisis, Turkish daily Hürriyet reported."Those who treated the Israeli government like a spoiled child should know that history will not forgive Israel’s state structure," he said.While slamming Israel for the strike, Erdogan also noted that Iran should first of all "reconsider its attitude against Syria.""What is Iran doing about Syria? While considering the acts of Israel, Iran at the same time needs to allow for common steps to be taken in the region," he added.Earlier Sunday, Syrian President Bashar Assad accused Israel of trying to destabilize his country by attacking a military research base outside Damascus last week, and said Syria was able to confront "current threats... and aggression" against it.Syria's state news agency SANA said Assad made the remarks in a meeting with Saeed Jalili, Iran's national security council secretary, at meeting in the Syrian capital. It was Assad's first reported response to Wednesday's attack.US sources said that Israeli warplanes struck a convoy carrying anti-aircraft missiles last Wednesday; Israel has declined to confirm or deny the report, and western sources have speculated that the convoy's weapons were destined for Hezbollah. Syria, which initially denied the incident, later said the target was a scientific research facility. SANA quoted Jalili as reaffirming Tehran's "full support for the Syrian people ... facing the Zionist aggression, and its continued coordination to confront the conspiracies and foreign projects".On Saturday, a Syrian military source told opposition website Al-Hakika that Syrian President Bashar Assad has no intention of responding to the purported Israeli strike on a weapons convoy last week due to the weakened state of his army after almost two years of battling rebels inside the country.The Syrian president, Shi'ite Iran's closest Arab ally, is battling a 22-month-old uprising in which 60,000 people have been killed. Assad says the rebels are Islamist terrorists funded and armed by Turkey and Sunni Muslim Gulf Arab states.Neighboring Israel has said it might have to intervene to prevent Syrian chemical or advanced weapons falling into the hands of militant groups, including Lebanon's Hezbollah which fought a 34-day war with Israel in 2006.Over the weekend Iranian officials warned Israel of a harsh Syrian response to the purported strike close to Syria's border with Lebanon. The deputy head of the Iranian army said that the Syrian counterattack will send Israel into a coma, Iran's state-run English-language Press TV reported.“In the new era, the criminals should know that behind their every blow lies a massive retaliatory blow, whose time, level and magnitude will be determined by the resolve of the free and anti-hegemonic nations,” Press TV quoted Brigadier General Masoud Jazayeri as saying.Iranian Parliament Speaker Ali Larijani also warned Israel on Sunday of the consequences of the alleged strike."The world is witnessing a vengeance carried out by the West, particularly the US, and some backward elements in the region against resistance," he accused.Larijani called on countries in the region to distance themselves from Israel and said he believed "the Islamic awakening movement in the region would give a proper response to the Zionist regime."On Sunday, The Sunday Times cited sources close to military planners as saying that Israel is considering creating a buffer zone reaching up to 10 miles inside Syria.A security fence is currently being erected from Mount Avital south to the point where the Israeli, Syrian and Jordanian borders meet on the southern Golan Heights, but, according to the military source, a buffer zone is necessary to prevent daily mortar and rocket attacks.On Saturday, Syrian television aired images of wreckage at at military research center in Jamarya north-west of Damascus, where Syrian claims Israel has struck.
Details of Wednesday's strike remain sketchy and, in parts, contradictory. Syria said Israeli warplanes, flying low to avoid detection by radar, crossed into its airspace from Lebanon and struck the Jamraya site. 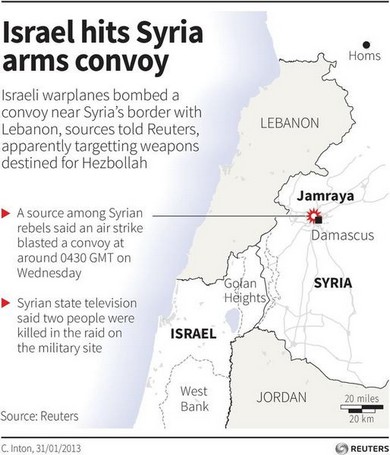 But diplomats, Syrian rebels and regional security sources said the Israeli planes hit a weapons convoy heading from Syria to Lebanon, apparently destined for President Bashar Assad's ally Hezbollah, and the rebels said they - not Israel - hit Jamraya with mortars.Yaakov Lappin contributed to this report.
Subscribe for our daily newsletter