Over 28 rockets were launched at Israel from Gaza this month, says IDF Spokesperson's Office.

By JPOST.COM STAFF
JANUARY 31, 2014 13:05
IDF strikes targets in Gaza
(photo credit: COURTESY IDF SPOKESMAN'S OFFICE)
Advertisement
There was a dramatic increase in terror activity from Gaza in January, according a press release from the IDF Spokesperson's Office put out on Friday.Fourteen rockets landed in southern Israel, and five were intercepted by the Iron Dome missile defense system as they were approaching the area surrounding Ashkelon, the statement said. 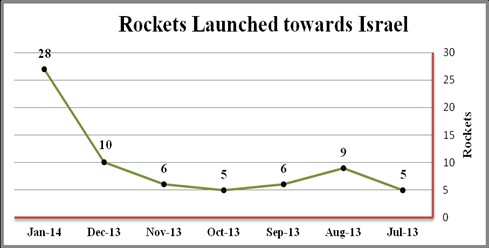 The number of rockets launched at Israel has dramatically increased in the last few months.The Israeli Air Force launched airstrikes at three suspected terrorist targets in the Gaza Strip before dawn on Friday, an IDF spokesman said."In response to the rocket fire at Israel, IAF aircraft targeted overnight a terror activity site and a weapon manufacturing facility in the northern Gaza strip and a weapon storage facility in the southern Gaza Strip," the IDF said. "Direct hits were confirmed."Seven Palestinians were injured in the strikes, reported Palestinian news agency Ma'an.Defense Minister Moshe Ya'alon, currently on a business trip in Germany, released a statement on the airstrikes."We will not tolerate rocket fire towards Israel or any attempt to return to the situation before Operation Pillar of Defense," he said.The defense minister stressed that Israel holds Hamas responsible to everything that happens in the Gaza Strip, and that the organization will pay the price for any rocket shooting or terror attacks against Israel.Earlier in January, the IAF struck and killed Islamic Jihad terrorist Ahmed Sa'ad and PLO terrorist Ahmed Za'anin, both of whom "were extensively involved" in the planning and carrying out of rocket attacks on southern Israel as well as other attacks on IDF soldiers, an IDF spokesperson said.Three improvised explosive devices (IEDs) were found next to the Gaza security fence in the last month alone. The IEDs were detonated with the aim of harming IDF soldiers in the area safeguarding Israeli communities close to the border, an IDF spokesperson said."Israelis cannot be held at the mercy of these hideous terrorists operating from Hamas Gaza Strip," the spokesperson continued. "The bases of Gaza terrorism and its industry of death will not be immune while our citizens are being attacked. It is our responsibility, right and obligation to defend Israel from Gaza-based aggression."