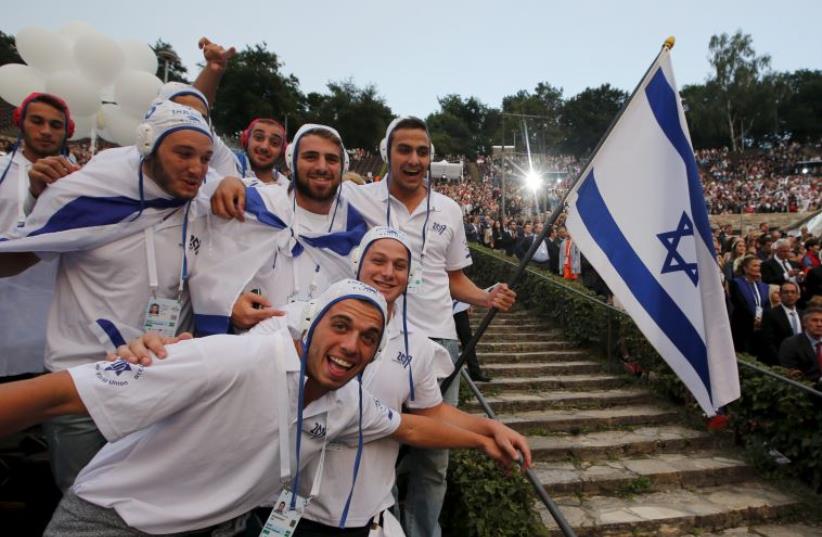 Athletes of the Israeli team arrive for the opening cermony of the 14th European Maccabi Games in Berlin, Germany July 28, 2015
(photo credit: REUTERS)
Advertisement
Two youths taunted six Jewish men with anti-Semitic insults and tossed an object at the group, police in the German capital said on Friday. The attackers fled and are being sought for alleged attempted assault and hate crimes. The incident took place in the Berlin district of Neukölln, a neighborhood with a large Muslim population. Separately, police arrested “a man with an Arab background” for yelling anti-Semitic insults at two security guards at the Hotel Estrel, where 2,000 people and athletes associated with the European Maccabi Games are staying, the Die Welt paper reported on Saturday. The hotel is 900 meters from the Al-Nur Mosque, a hotbed of radical Islam.The head of the German umbrella organization for the Maccabi, Alon Meyer, warned Jewish athletes about traveling in large groups through Neukölln and wearing visibly Jewish items such as Stars of David or kippot. According to the Maccabi Games’ rules of conduct, athletes should not make themselves recognizable as Jews in “sensitive areas of Berlin,” and it is preferable that they travel in taxis and not wear kippot.Neo-Nazis also threated the Jewish athletes on their Web platforms.Critics said Silke Burmester, a left-wing journalist who writes for die Taz, die Zeit and a journalism trade magazine Medium Magazin, is stoking anti-Semitism. In response to the neo-Nazi threats, she wrote on Twitter, “What are these Jewish sports festivals?” and, “Have the Jews had their own Olympic games since ’36?” The Nazi regime hosted the 1936 Olympic Games in Berlin and banned German Jews from participating. Alex Feuerherdt, a leading expert on anti-Semitism in Germany’s sporting culture, told The Jerusalem Post on Saturday, “Naturally what Burmester said is anti-Semitic, because for her, it is not scandalous that neo-Nazis attack Jewish athletes, but rather that the Jews have their own sports festival.”Feuerherdt added, “Jews established the event [Maccabi] because of anti-Semitism and Burmester wants Jews to integrate and not have their own sports event. She obviously has a problem with Jewish self-confidence and sovereignty and her comments reflect double standards.”In a second tweet, Burmester wrote, “I understand if not everybody finds all of my tweets about ‘Jewish sports’ successful. I would rather have a world beyond classification.” Feuerherdt said this comment also reflected her anti-Semitism.Burmester described the Jewish event using Nazi imagery, writing, “The Jewish sport has again arrived in Berlin, [according to] @ZDFheute [a TV news station]. What should that be? Swastika-throw?” The US-based Jewish website Heeb criticized Burmester’s tweets: “So there you have it: Some Germans are so over anti-Semitism, they’re over the existence of Jews.” The article by Fabian Wollf, titled, “Jews Do Sports, Germans Weirded Out,” added that “Jews expressing their Jewish identity beyond religion will often hear they should get over it and not harp on differences.”Last year, there were 192 criminal acts of anti-Semitism in Berlin, according to the authorities. The American Jewish Committee’s Berlin office told the Post that there were additional 15 acts of violence and 70 incidents of anti-Semitic outbreaks.