Sacks said Corbyn’s speech had been divisive and hateful, and undermined the existence of an entire group of British citizens by depicting them as essentially alien. 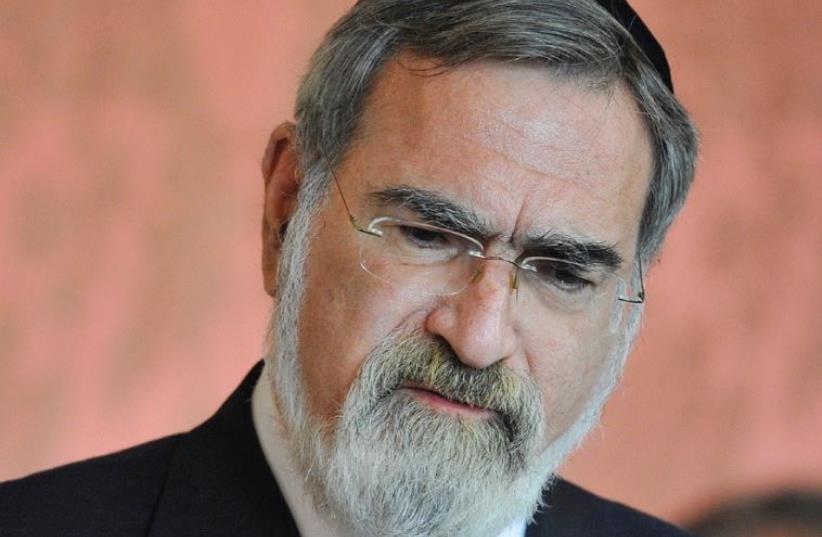 Rabbi Jonathan Sacks
(photo credit: REUTERS)
Advertisement
Rabbi Jonathan Sacks has labeled UK Labour Party leader Jeremy Corbyn an antisemite who has backed “racists, terrorists and dealers of hate,” in a fierce condemnation of the embattled politician.Sacks, a former chief rabbi of the UK and a highly prominent Jewish leader, made his uncharacteristically strident comments to the New Statesman in reference to a speech Corbyn gave in 2013, when he said that “Zionists” in Britain did not understand English irony.Referencing a speech given by the Palestinian Authority’s diplomatic representative in the UK, Manuel Hassassian, Corbyn said it had been “dutifully recorded by the thankfully silent Zionists who were in the audience on that occasion, who then came up and berated him afterwards for what he said.”“There are two problems,” Corbyn continued. “One is they don’t want to study history, and secondly, having lived in this country for a very long time, probably all their lives, they don’t understand English irony either… So they need two lessons which we can perhaps help them with.”In an interview published on Tuesday, Sacks said Corbyn’s speech had been divisive and hateful, and undermined the existence of an entire group of British citizens by depicting them as essentially alien.“We can only judge Jeremy Corbyn by his words and his actions,” Sacks told the New Statement. “He has given support to racists, terrorists and dealers of hate who want to kill Jews and remove from Israel from the map.”“When he implies that, however long they have lived here, Jews are not fully British, he is using the language of classic pre-war European antisemitism,” Sacks continued. “He has legitimized the public expression of hate, and where he leads, others will follow. Now, within living memory of the Holocaust, and while Jews are being murdered elsewhere in Europe for being Jews, we have an antisemite as the leader of the Labour Party and her majesty’s opposition. That is why Jews feel so threatened by Mr. Corbyn and those who support him.”Sacks said that Jews had contributed to British national life for three and a half centuries, and that “Mr. Corbyn’s embrace of hate defiles our politics and demeans the country we love.”Following the revelation of Corbyn’s speech by the Daily Mail, the Labour leader insisted he had not used the word Zionist as a reference for all Jews, but in its narrow political definition.“I described those pro-Israel activists as Zionists, in the accurate political sense and not as a euphemism for Jewish people – and that is made clear in the rest of my speech that day,” said Corbyn. “I am now more careful with how I might use the term ‘Zionist,’ because a once self-identifying political term has been increasingly hijacked by antisemites as code for Jews.”