Austrian Jews in bind over donation to anti-Israel NGO 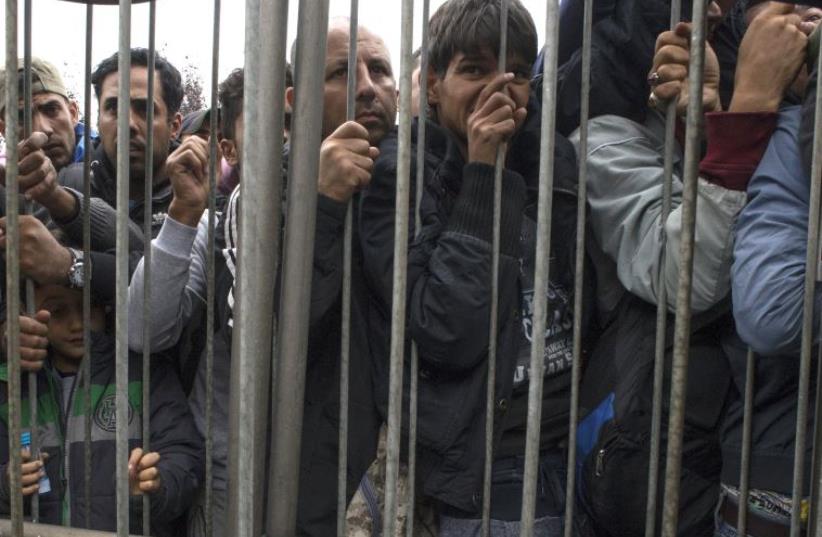 Hundreds of migrants struggle to board a train on September 11, 2015 at a train station in Nickelsdorf, at the Austrian side of the border between Hungary and Austria. Yesterday over eight thousand migrants passed through this location and the same number is expected for today.
(photo credit: AFP PHOTO/JOE KLAMAR)
Advertisement
BERLIN – Austria’s Jewish community is engulfed in turmoil because it donated €14,000 to Caritas – a Catholic humanitarian aid organization accused of stoking hostility to Israel – for aid to Syrian refugees, triggering a firestorm of criticism.“If Simon Wiesenthal were alive he would jump into his grave if he knew what was happening,” Dr. Shimon Samuels, the Simon Wiesenthal Center’s director for international relations, told The Jerusalem Post on Wednesday.Wiesenthal, the Nazi hunter and survivor of extermination camps, was based in Vienna. “The act shows the absence of Simon Wiesenthal, the great conscience of the Shoah, is no longer there,” said Samuels.Prof. Gerald Steinberg, the head of the Jerusalem-based NGO Monitor, said Thursday that either the leaders of the Jewish community of Vienna provided this money without checking details of the Caritas agenda, or they knowingly supported this radical and anti-Israel NGO.“In contrast to official Vatican policy, Caritas is very active in promoting Palestinian narratives and attacking Israel,” he said.“On Gaza, their propaganda statements ignore the reality of thousands of rocket attacks, Hamas terrorist tunnels and the human rights of Israeli victims, while claiming that the Israeli goal is to force Palestinians to ‘give up their rights to the land,’” he said.“This bias is also highlighted in the activities of the Caritas offices in Jerusalem and Jordan and by the NGO’s representative to the United Nations, who endorsed the Palestinian claim to a ‘right of return of Palestine refugees to their ancestral homes and lands,’ which is equivalent to the elimination of Israel.Caritas reports from Gaza simply repeat the standard Palestinian claims, attacking Israel, often absurdly, as documented by NGO Monitor. Perhaps after learning about the anti-peace agenda of Caritas, the Jewish community of Vienna will reverse this ill-advised decision.”NGO Monitor published in 2014 a nine-page report on the issue, titled “Catholic Aid Societies and Political Campaigns Directed at Israel: Caritas Internationalis.”The Austrian chapter of Caritas is cited in the report.Oskar Deutsch, the head of Austria’s Jewish community (IKG), said Thursday that the community in Vienna “is indeed very conscious that a strengthening of migration from Syria to Europe will pose political and security challenges for Jewish communities.At the same time the IKG views it as a duty to support humanitarian help for people that flee the terror of [Islamic State] or Syria’s regime.”Deutsch said, “The Caritas Austria [organization] is non-political” and “there are also not any known anti-Semitic or anti-Israeli statements toward Israel from the past. The Austria organization should not in this connection be put on the same level as Caritas International or Pax Christi.”Asked why the Jewish community did not donate to IsraAid, Detusch said the community decided to “provide aid on the ground in Austria to help.”He said the “IKG continues to support the State of Israel and organizations in the framework of its possibilities.”According to the community’s website, “approximately 15,000 Jews are living in Austria, most of them in Vienna. In [Austria’s Jewish community], over 7,000 members in Vienna are registered. In remaining federal states there are about 300.”An email examined by the Post from a member of the Vienna Jewish community read, “I don’t find it [appropriate] that the IKG turned to Caritas.” The member did not immediately respond to an email seeking to cite her name.Samuels warned that “if the Austrian- Jewish community, a Shoah survivor community, turns to an organization that associates with the demonization of Israel, it could have a domino effect.”He urged Deutsch to call on Caritas to state its opposition to the Boycott, Divestment and Sanctions movement against Israel.Samuels rejected Deutsch’s contention that Caritas Austria is not anti-Israel.He noted that members of Caritas Austria signed a resolution calling for a “one-state solution” in 2010. Samuels said the one-state solution proposed by Caritas Austria members spells the end of Israel. He added that “Caritas International demonstrated its unconditional solidarity for the Gaza flotilla in 2010.”Deutsch did not specifically address Samuel’s accusations. Die Jüdische (The Jewish), the popular news and commentary website in Vienna, which is read by many IKG members, published a detailed report on the spat within the IKG. The authors Alexandra Hahlweg and the editor-in-chief of Die Jüdische, Samuel Laster, chronicled the anti-Israel activities of Caritas, including its care of the late Nazi war criminal Milivoj Ašner in its old age home.Deutsch termed the Die Jüdische report “polemical” and it presented its facts as “unbalanced.”