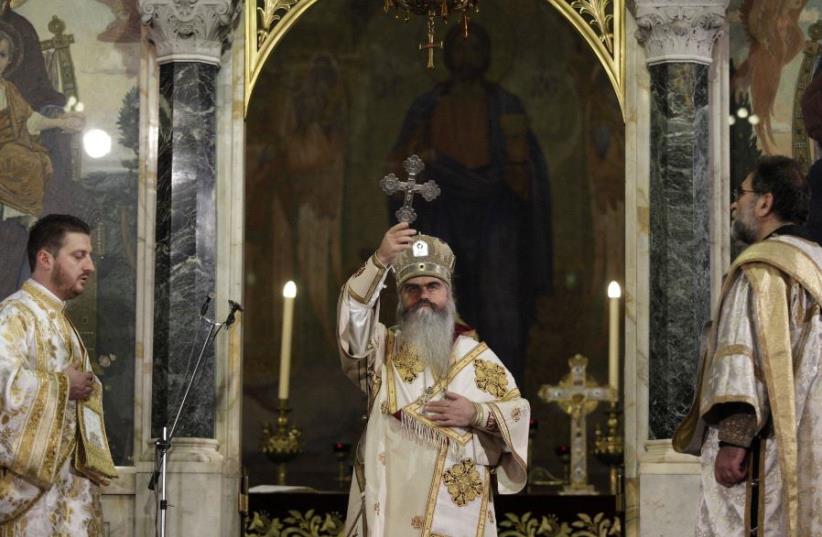 Metropolitan Kirill (C), deputy chairman of the Bulgarian Orthodox Church, blesses during a Christmas Eve mass in Alexander Nevski Cathedral in Sofia
(photo credit: REUTERS)
Advertisement
Bulgarian-Israeli lawyer Moshe Aloni is seeking support for a campaign to award the Nobel Peace Prize to the Bulgarian Independent Orthodox Church for protecting the country’s Jewish minority during the Holocaust.Aloni, head of the Bulgarian-Israeli Cultural Institute, nominated the church in January for its “brave acts of heroism,” including voting unanimously to condemn antisemitic laws during World War II and for going against the planned deportation of the country’s 48,000 Jews to Nazi death camps in Europe.In a letter sent to The Jerusalem Post last week, Aloni noted that while the campaign had garnered support from Europe and the US, he sought to gain awareness from the Israeli public.A petition launched last year on Change.org in support of this cause had, as of Sunday, gained 740 signatures of a target of 1,000.The petition notes that while the Bulgarian government was an ally of Nazi Germany, the church showed bravery and leadership by fighting against antisemitic laws. It makes specific mention of two clergymen: Metropolitan (Bishop) Stephan, the head of the Sofian Church and the highest ranking Bulgarian Church official during the Holocaust; and Metropolitan Kiril, the head of the church in Plovdiv.The pair was named as Righteous Among the Nations by Yad Vashem in 2001, for vigorously opposing the anti-Jewish policies of the Bulgarian regime, and taking active steps against its policy of deporting the Jews of Bulgaria and handing them over to the Germans.Kiril is said to have saved the 1,500 Jews of Plovdiv, who were set to be deported in March 1943. According to Yad Vashem, Kiril sent a personal telegram to the king begging for his mercy toward the Jews, and contacted the head of the local police, threatening to end his loyalty toward to Bulgaria and to act as he wished. Further testimony claims that he threatened to lie across the railway tracks in order to stop the deportation.“Due to the heroic acts of these two prominent leaders and their willingness to speak up and take action, the deportation of the Jews of Bulgaria was postponed again and again until it was finally canceled with the end of the war,” wrote Aloni in his letter to the Nobel committee.Aloni, who was born in Sofia, mentions that he and his family are among those alive today thanks to the “heroism of the Bulgarian Church and other brave citizens.”“The nomination of the Bulgarian Church is most relevant in these days filled with hate and racism and modern-day ethnic cleansing,” Aloni said.The petition is sponsored by former cabinet minister Ephraim Sneh and University of Haifa law professor Moshe Keshet.