First situation room to combat BDS opens in US 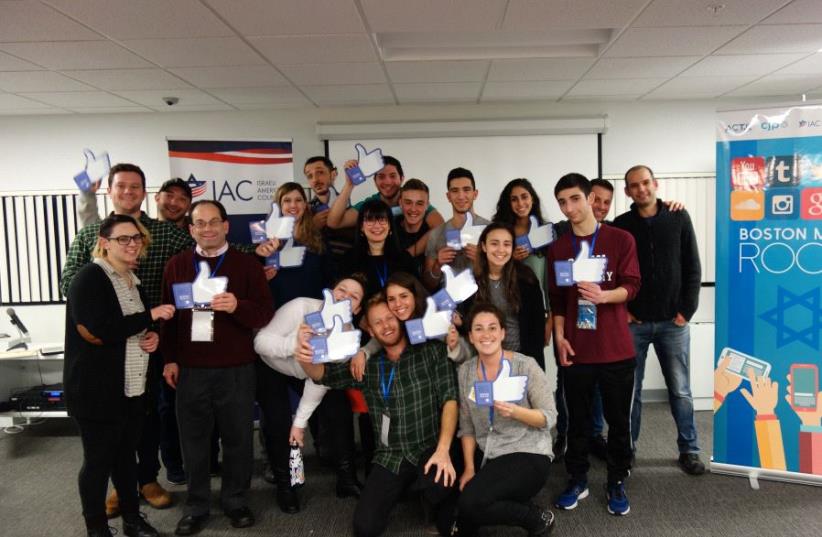 Participants in the Boston situation room to combat BDS.
(photo credit: Courtesy)
Advertisement
ACT.IL, a joint initiative of the Interdisciplinary Center Herzliya and the Israeli American Council to combat the delegitimization of Israel on social media, has opened its first “virtual situation room” in the US.The situation room, located at the IAC Community Center in Boston, runs simulated exercises on developing pro-Israel social media campaigns during times of crisis.The room is a joint collaboration of the IDC, the IAC Boston, and Combined Jewish Philanthropies.“Our goal is to strengthen the legitimization of Israel throughout the world, but unfortunately at the same time there are strong groups like BDS acting to delegitimize Israel,” Yarden Ben Yosef, director of ACT.IL told The Jerusalem Post on Tuesday.ACT.IL aims to combat the BDS movement and the delegitimization of Israel through uniting a global community of pro-Israel activists on social media in a coordinated effort to inform and influence people on Israel.In addition to the virtual simulations, the situation room also runs local campaigns and creates online content and its participants engage in online activism, which includes signing petitions, commenting on news articles, and sharing content on social media.“Our ultimate goal is to train the entire [pro-Israel] community to go out and take action in the real world,” Ben Yosef said.The idea behind the virtual situation room and ACT.IL stemmed from the success of the IDC Student Union situation room launched initially during Operation Pillar of Defense in 2012 and again during Operation Protective Edge in 2014.“During the wars the students at the IDC felt that we needed to do something to help and our advantage as students, many of which are international students from 86 countries, was to talk to people on the platforms that we know such as social media,” Ben Yosef said.During the war, the IDC situation room provided factual information about the situation on the ground to people around the world, and countered the misinformation and lies about Israel and the IDF being disseminated on social media sites.Through its efforts in 2014, the situation room recruited 670 volunteers and was able to reach some 40 million people in 35 languages in over 100 countries.“After the war we realized that we need a continuation of this work, unfortunately also during peace time,” he said.As such, the situation room had to reevaluate its objectives and restructure its hasbara efforts, partnering with the IAC in an effort to expand the initiative all over the world to ensure that anyone who wants to help Israel will be able to.“During the past year we have flown to the US once a month to campuses and Jewish communities to provide them with the tools so that they can join our community of online activists,” he explained. “However we realized there was a greater need for this to be present all the time.”Ben Yosef said the first community that was chosen was Boston because of the many universities in the city with strong pro- and anti-Israel activities on campuses.The Boston room is run by an Israeli representative from the IDC and includes ten local professionals with backgrounds in marketing and PR who volunteer their time to train activists. In addition, the room is operated by 20 high school and college students, engaged in online activism, who receive a scholarship for their participation.In addition, the initiative has partnered with some 14 pro-Israel groups working in Boston.“Our hope is that the entire [local pro-Israel] community will take part – some 100 people will be trained in the initial stages and then hopefully thousands more after that,” he said.In the near future, there are already two more situation rooms slated to be opened in the US in New Jersey and in Los Angeles, with the aim being to open additional situation rooms in some 30 to 50 communities around the world.“This has turned into an effective platform working for the benefit of the State of Israel because so many people have come together and made a collective effort,” he said. “And we are always looking for new local partners.”Na’ama Ore, IAC’s regional director in Boston, added that the initiative is bringing a new and innovative approach to pro-Israel activism.“In an era where so many from the Jewish community don’t find a way to express their love and support for Israel, the situation room allows an innovative and effective platform [to do so],” she said.“This is just the beginning and we have a lot of work still ahead of us, but this is a very positive start.”