The 550,000 Jews of South Florida joined their neighbors in hanging hurricane shutters to shield windows from flying objects as well staying home from work and school. 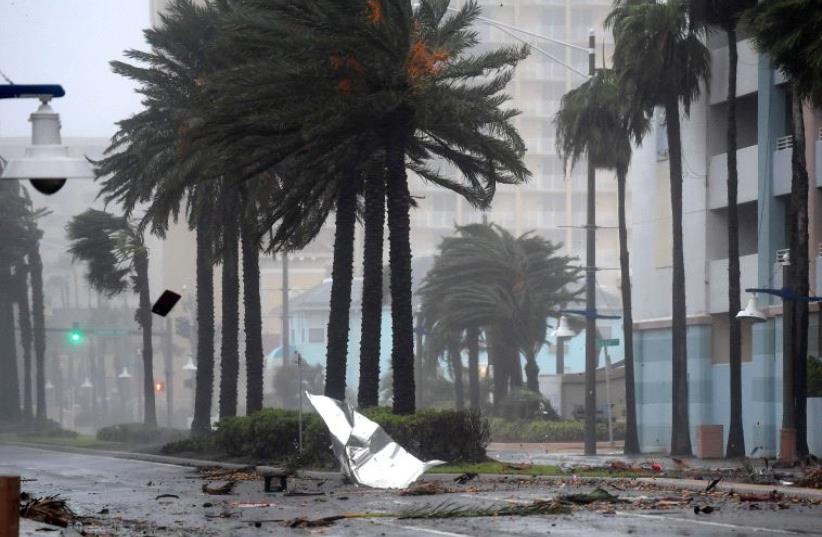 Debris flies through the air as the eye of Hurricane Matthew nears Daytona Beach, Florida.
(photo credit: REUTERS)
Advertisement
MIAMI  — Jewish institutions here were bracing for the worst as officials issued dire warnings about Hurricane Matthew, which approached the state’s Atlantic coast Thursday evening and was to move up the coast over the next 24 hours.The National Hurricane Center called Matthew, which wreaked havoc through Cuba and Haiti, extremely dangerous. The storm was downgraded from Category 4 to Category 3 early Friday, NBC reported.“It is expected to remain a category four hurricane as it moves near the coast, bringing the potential for extensive damage across northeast Palm Beach County,” read a National Hurricane Center report on Thursday afternoon. “Elsewhere, the main concern is the potential for significant wind damage across the remainder of Palm Beach and northeastern Broward counties where there continues to be a threat of hurricane conditions. Squalls associated with the rain bands of Matthew are impacting much of South Florida, and will continue to be able to produce tropical storm force wind gusts through Friday.”The 550,000 Jews of South Florida joined their neighbors in hanging hurricane shutters to shield windows from flying objects as well staying home from work and school. In many cases the weather is preventing communal religious gatherings because of the dangers of braving 100-mile-per-hour winds predicted during landfall.Many synagogues are shuttering for Shabbat as the storm is predicted to rage during that time and could potentially leave a dangerous mess in its aftermath. The entire state is practically in lockdown and many are being told to evacuate coastal areas.The proprietor of Zak the Baker kosher restaurant in the hip Wynnwood section of Miami posted a Facebook photo of staff boarding up the storefront on Thursday morning. The Miami Jewish Federation rescheduled a Thursday night Community Memorial Service honoring Israeli President Shimon Peres organized together with the Consulate General of Israel in Miami and other groups.In Miami, the Aventura Turnberry Jewish Center and Tauber Academy announced closures on Thursday and Friday. It affected their daily minyan in the morning and afternoon. An announcement on their web page said the leadership would continue to monitor the storm and its aftermath and promised to advise the congregation via text message about holding Friday night and Saturday morning services this coming Shabbat if weather, road and building conditions permit.Temple Israel of Greater Miami on the mainland and Temple Beth Sholom on Miami Beach closed during the week, also telling their congregants they would open for services Friday and Saturday weather permitting.Farther south, Congregation Bet Shira in Pinecrest erred on the side of caution telling congregants through social media there would be no Friday evening Shabbat services but Saturday morning Shabbat services would take place as usual, providing the synagogue has electrical power. Central and northern coastal areas were expected to bear the brunt of the storm.Evacuation orders were given for those residing in coastal areas starting around the Palm Beach area as well as counties to the north.“This storm will kill you,” Gov. Rick Scott said at a Thursday news conference, urging Floridians to take the storm seriously.Chabad­-Lubavitch centers in the storm’s path are also preparing for the storm, including protecting Torah scrolls from damage and opening their doors to evacuees. Rabbi Zvi Konikov and his wife, Shulamit, co-directors of Chabad of the Space & Treasure Coasts in Satellite Beach, evacuated on Thursday after securing the building and its scrolls, Chabad.org reported.Chabad centers not directly in the path of the storm, including the Lubavitch Chabad Jewish Student Center in Gainseville and the Chabad Lubavitch of Tampa Bay, are offering evacuees a place to stay.“People in Daytona have reached out to us, and we are offering to host families from their area who need a place to stay,” Sulha Dubrowski, co-director of Chabad Lubavitch of Tampa Bay, told Chabad.org.With the danger of a storm surge, the egalitarian Temple Emanuel, located on the barrier islands of Palm Beach, cancelled Friday night and Shabbat morning services. The Conservative Temple B’nai Jacob of Wellington in the western suburbs of Palm Beach County urged congregants through their Facebook page to make sure their preparations for the hurricane were thorough and complete.“Evacuate if necessary,” they urged. “Call another member of our community if you need assistance. Contact the appropriate authorites or the shul if you need help for a specific emergency. Be safe, and be strong. Chazak v’nitchazek! Be strong and we will strengthen each other! See you on Yom Kippur, when we will bentch gomel together as a congregation for delivering us from danger.”CBS 4 newscasters on Thursday afternoon warned viewers of the post-storm dangers, specifically the possibility of downed power lines.Temple Beth Kodesh in Boynton Beach in Palm Beach County, Temple Beit HeYam in Stuart, Temple Beth El in Port St. Lucie and Temple Beth in Jupiter are also shuttered until Monday.“Uvacharta BaChaim You must choose life,” Temple Beth Am’s message read.On Thursday morning, the Orthodox Palm Beach Synagogue posted photos of men in the shul garbed in their tallitot and tefillin captioned: “Last morning service at the Palm Beach Synagogue before the storm. Praying for everyone to be safe!”Farther north, the Jewish Federation of Greater Orlando closed its operations, as did the Maitland Jewish Community Campus through Monday. The  Jacksonville Jewish Center also announced its closing this week, moving the Conservative synagogue’s annual cemetery memorial with another synagogue indoors on Sunday to the Jacksonville Jewish Center.By far, the most creative message explaining the series of cancellations through Monday caused by weather was a YouTube video posted by the clergy at Temple Judea of Palm Beach Gardens. Rabbi Yaron Kapitulnik and Cantor Alicia Stillman sang the traditional Shalom Aleichem Shabbat song in front of the temple’s ark.“’Yehi ratzon lefanecha Adonai elohenu velohei avotenu,’ may it be your will Adonai, God of our ancestors, that we all remain safe and dry. Amen,” Kapitulnik ended the video.