We must deepen and strengthen our political dialogue, Jimmy Morales tells Reuven Rivlin. 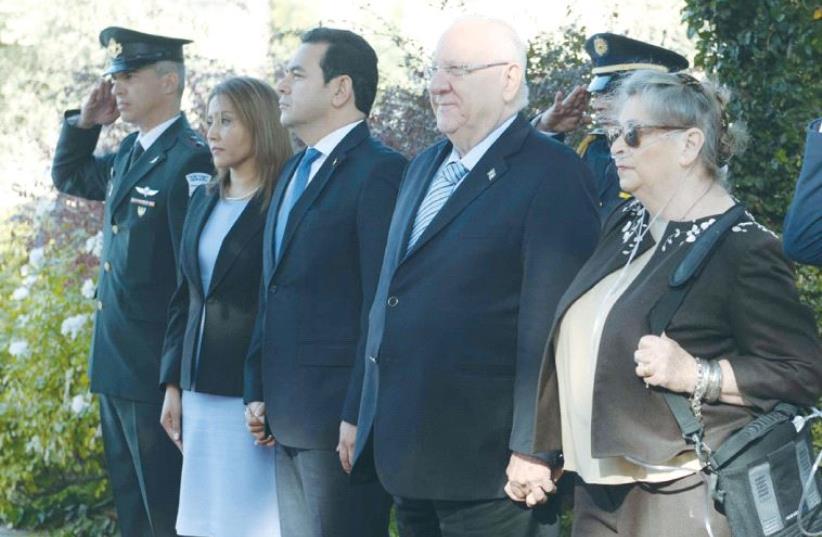 PRESIDENT REUVEN RIVLIN and his wife, Nechama, meet with Guatemalan President Jimmy Morales and his wife, Patricia Marroquín, at the President’s Residence in Jerusalem.
(photo credit: MARK NEYMAN/GPO)
Advertisement
Guatemalan President Jimmy Morales, an evangelical Christian whose election last October was seen by some diplomatic officials as a harbinger of closer ties with the Central American state, began his state visit Monday by meeting with President Reuven Rivlin.“I want to thank you, Mr. President, for your personal support and for the support of your country for Israel on the international stage,” Rivlin said to Morales, making his first visit outside the Americas since taking over as president in January. “Israel can help greatly in development and innovation in your region and around the world, and we are committed to doing so.”Morales, who arrived with his wife and four cabinet ministers, is scheduled to meet on Tuesday with Prime Minister Benjamin Netanyahu. Netanyahu is expected to raise the issue of voting patterns in international forums with the Guatemalan president. In recent years Guatemala has generally abstained on votes in the UN of importance to Israel.One diplomatic official said Jerusalem has felt an improvement in ties with Guatemala since the election of Morales – a former television comedian with no governmental experience – both in terms of bilateral cooperation and support in international forums where Guatemala has spoken out on Israel’s behalf.The official noted that Israel has had good relations with Guatemala under previous presidents as well, and that Otto Perez Molina was the first Guatemalan president to ever visit Israel when he did so in 2013. At the same time, the official said, Perez was not “committed to Israel to the same extent” as Morales.Rivlin, in noting that there is hardly a town in Israel that does not have a Guatemala Street, told Morales that Israelis can never forget the crucial role played by Guatemala’s representative to the UN Special Committee on Palestine Jorge Garcia Granados, who was then ambassador to the UN, in mobilizing support for the 1947 partition plan that led to the establishment of Israel.Subsequently he was Guatemala’s first ambassador to Israel.Rivlin praised Morales for continuing the legacy of friendship of his predecessors, and also for his country’s support in international forums.Although Israel is a small country, said Rivlin, it is always willing to share its vast knowledge and would be happy to share this knowledge with Guatemala.Morales said although he and his entourage were interested in visiting Israel’s historic sites, they were also eager to enhance the bilateral relationship at all levels, and were particularly interested in increased cooperation in agriculture, breeding of livestock and science and technology.“We must deepen and strengthen our political dialogue,” he said.Guatemala, according to a diplomatic source, is also interested in enhanced security cooperation with Israel.After meeting Rivlin, Morales visited Yad Vashem, took part in a business symposium and in the evening was hosted by Rivlin at a state dinner.On Tuesday, Morales will receive an honorary doctorate from the Hebrew University of Jerusalem in a ceremony at the Truman Institute. The date marks the 69th anniversary of the UN vote on Resolution 181 on the partition of Palestine.Guatemala was the first Latin American country to vote in favor – Granados was instrumental in persuading other countries to do so as well – and to subsequently recognize the nascent State of Israel.In making its decision to honor Morales, the university noted that since entering office in January, Morales has led the struggle against government corruption in his country, and has significantly strengthened relations between Israel and Guatemala. Shortly after his election, Morales visited the synagogue in Guatemala City, met with members of the Jewish community and declared his desire to visit Israel.