"We have an alliance going back to when we fled the inquisition in Spain," says shaman rabbi. 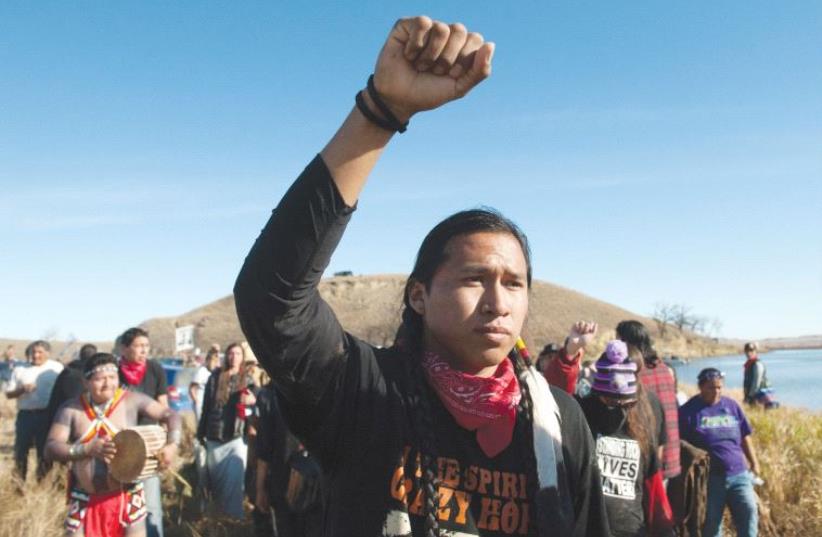 PROTESTERS DEMONSTRATE against the building of a pipeline on the Standing Rock Indian Reservation in North Dakota on Thursday.
(photo credit: STEPHANIE KEITH/REUTERS)
NEW YORK – As tensions on the North Dakota Indian reservation of Standing Rock continue to escalate over the Dakota Access Pipeline, Jews from across the United States have been traveling to the area in a show of solidarity with the protesters.Since April, Native Americans from several tribes have been at the site protesting the pipeline. The $3.7 billion project aims to make the United States less dependent on foreign oil by carrying 470,000 barrels of oil a day from the oil fields in North Dakota to a refinery near Chicago, Illinois.Local tribes fighting against completion of the project are concerned that the 1,825 km. pipeline, which was designed to cross the Missouri River, could contaminate their drinking water supply.In addition, they say the pipeline’s construction would destroy historical and sacred native sites.Since the spring, the Native American community in Standing Rock has been setting up spiritual camps along the project’s planned route to block its advance. Thousands of people have traveled to the area to show solidarity.Rabbi Julia Melanie Vaughns has been planning her trip to the Indian Reservation from her Oregon home since late summer.Last week, she decided to open an online crowdfunding page for this purpose.On her page, Rabbi Vaughns explained she is going to Standing Rock to “hold prayer ceremonies, healing services and to join the clergy call in directly supporting the water protectors and the Standing Rock Sioux Tribe in this critical historic moment on Earth.”Before heading to the Dakotas, she will be traveling to Jewish communities in the US to rally more members to the cause, and eventually, get them to join the trip.“My lineage as a rabbi is largely in the Earth-centered shamanic groups of Jewish tradition,” she told The Jerusalem Post during a phone interview from Miami International Airport on Thursday.“So it’s a natural thing for me to pay attention to. I’m also very traditionally trained, but part of what I do is make that bridge between indigenous issues and Judaism.”Rabbi Vaughns believes there is a “moral imperative” for Jews to take action regarding the pipeline.“We have this ancient alliance at least 500 years old with the North American tribes, going back to when the Jews were fleeing inquisition in Spain and were the first administrators of Mexico, and then went to New Mexico,” she said.“But beyond that, it’s a really basic human rights issue that it has come down to. It was a worthy issue from the beginning surrounding water rights and water protection. The Torah speaks to this endlessly, but now, it’s actually human rights.”On her crowdfunding page, Rabbi Vaughns wrote, “What is happening at Standing Rock is a true historic moment – a pendulum point on this planet as we cleanse the Earth and uplevel the consciousness of humanity.” She hopes to put together a Jewish mission to join her in Standing Rock starting in December.In recent weeks, other rabbis and members of Jewish communities across the country have made similar efforts, in answer to an urgent call for solidarity from native leaders at Standing Rock.A protest that included a delegation of rabbis, rabbinical students, and Jewish community members from Philadelphia was held at the site last Wednesday. Nine Jewish protesters were reportedly arrested during the event.The protests intensified last week, as law enforcement members in riot gear shot rubber bullets and discharged pepper spray into crowds of demonstrators. On Wednesday, President Obama said the Army Corps of Engineers, which approved the pipeline project, is currently looking into ways to reroute it and reach a compromise.On Tuesday, President Barack Obama weighed in on the ongoing protests against the construction of the oil pipeline in North Dakota, saying the US government is examining ways to reroute it and address concerns raised by Native American tribes.Obama’s comments late on Tuesday to online news site Now This were his first to directly address the escalating clashes between local authorities and protesters over Energy Transfer Partners’ $3.8 billion Dakota Access pipeline project.“My view is that there is a way for us to accommodate sacred lands of Native Americans. And I think that right now the Army Corps is examining whether there are ways to reroute this pipeline,” Obama said in the video interview.Reuters contributed to this report.

Tags jewish influence in america
Subscribe for our daily newsletter