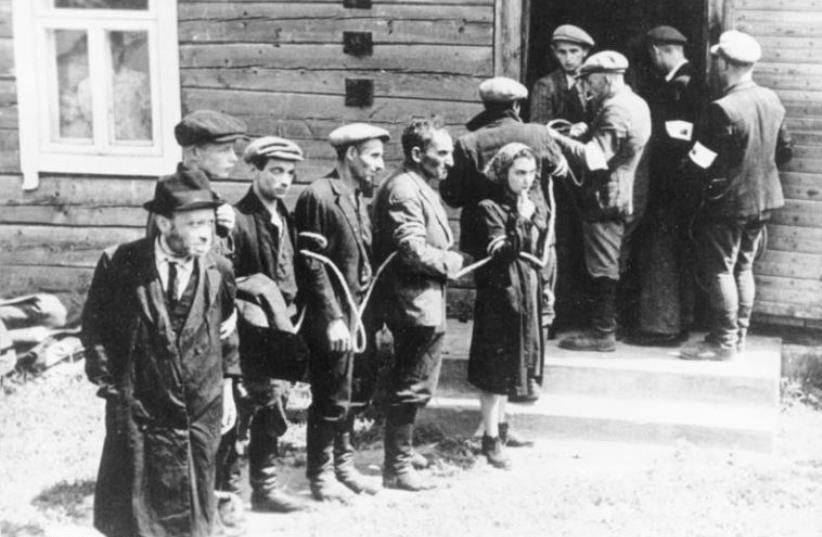 Lithuanian collaborators (with white armbands) arresting Jews in July 1941
(photo credit: WIKIMEDIA COMMONS/GERMAN FEDERAL ARCHIVES)
Advertisement
Following the publication in Lithuania of a groundbreaking book on local complicity during the Holocaust, a state museum on genocide said it would publish a list of 1,000 suspected perpetrators.Terese Birute Burauskaite, who heads the Vilnius-based Genocide and Resistance Research Center of Lithuania, said her institution would “this year try to publish a book” containing “over 1,000 Lithuanian residents who are connected to the Holocaust,” the news website Delfi.lt reported Tuesday.Burauskaite made her remarks in an interview on the findings of a book titled “Musiskiai” (“Our Own”) that was released last week. Co-authored by the Israeli Nazi hunter Efraim Zuroff and Ruta Vanagaite, a local author who began studying the Holocaust after discovering that members of her own family played a role in the murder of Jews during the genocide, the book focused media attention on the controversial issue of local complicity.In 2012, the museum gave the government a list containing 2,055 names of supposed perpetrators, Vanagaite said in the Delfi interview last week about her book, but Vilnius neither published it nor made any attempt to investigate the people concerned.Rimantas Vaitkus, a deputy minister for education, told Delfi: “We do not have such a list,” explaining that compiling one was up to the genocide center. But Burauskaite, the center’s director, said her organization had discussed the list with the government. After studying the list for three years, she said her organization eliminated approximately 1,000 suspects.According to Zuroff, the list was published in 2012 briefly on the website of the museum but taken offline after 24 hours.The book by Zuroff, who is the Israel director of the Simon Wiesenthal Center, and Vanagaite chronicles their journeys last summer across Lithuania, where they spoke with people who witnessed locals killing Jews. Its 2,500 copies were sold out within two days of its Jan. 26 publication release.More than 95 percent of the 220,000 Jews who lived in Lithuania during the Holocaust were murdered, many of them by local Nazis and Nazi collaborators. Some of the perpetrators are celebrated as heroes in Lithuania, where many perceive them as national heroes for their opposition to Russian domination of the country.“There has been a stubborn reluctance in Lithuania to start the retrospection that went on elsewhere in Europe,” Zuroff said. “There are signs this book is changing that.”