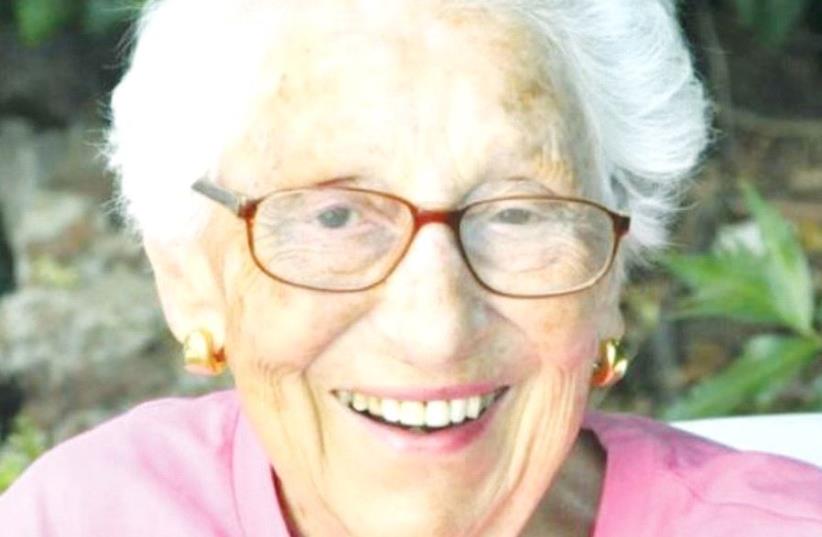 ALICE SHALVI
(photo credit: DEBBI COOPER)
Advertisement
Nefesh B’Nefesh announced Tuesday that it awarded its annual Lifetime Achievement Award to Prof. Alice Shalvi for her work in shaping the status of women in Israel thorough education and advocacy, and to Prof. Eliezer Jaffe for his accomplishments in raising awareness and support for Israeli citizens in need.The aliya organization is honoring the two professors in addition to seven Anglo olim selected to receive the 2017 Sylvan Adams Nefesh B’Nefesh Bonei Zion Prize, which recognizes Anglos who have made major contributions to the State of Israel.The honorees include: Prof. Benjamin W. Corn, head of the Institute of Radiotherapy at Ichilov Hospital, in the field of Science & Medicine; Beth Steinberg, director and co-founder of Shutaf Inclusion Programs and artistic director and co-founder of Theater in the Rough, in the field of Community & Nonprofit; Rabbi Chaim Brovender, founder and rosh yeshiva of WebYeshiva.org, in the field of Education; Prof.Gerald Steinberg, president of NGO Monitor and professor of political studies at Bar-Ilan University, in the field of Israel Advocacy; and Yoram Raanan, a contemporary Jewish artist, in the field of Culture, Art & Sports.The Young Leadership Prize was awarded to Capt. Libby Weiss, head of the social media department in the IDF Spokesman’s Unit, and to Scott Neiss, founder and executive director of the Israel Lacrosse Association.The prize recipients were selected out of hundreds of nominees from English-speaking countries.“Olim from English-speaking countries around the world continue to make significant and meaningful contributions to the State of Israel each day. Once again, these Bonei Zion Prize recipients demonstrate that there are no limits on what an oleh can achieve and the impact one can have,” said Rabbi Yehoshua Fass, Nefesh B’Nefesh co-founder and executive director. “We are proud to be honoring such an extraordinary group of dedicated and Zionistic individuals.”This year’s prizes are sponsored by Canadian real estate developer and NBN oleh Sylvan Adams, and will be awarded at a ceremony in the Knesset on June 26.