Ilan Swartz-Brownstein and Josh Leviton, both of Manhattan, did not survive in the “Judge Cuts” episode that aired this week. 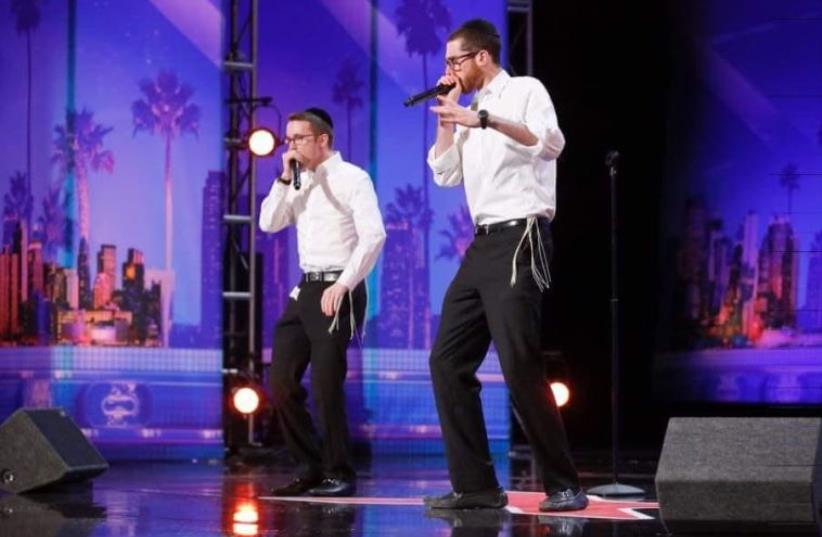 Ilan Swartz-Brownstein (left) and Josh Leviton perform on 'America's Got Talent'
(photo credit: COURTESY NBC)
Advertisement
Two Orthodox Jewish beatboxers failed to advance on “America’s Got Talent” after wowing the judges in the initial round of the TV competition.Ilan Swartz-Brownstein and Josh Leviton, both of Manhattan, did not survive in the “Judge Cuts” episode that aired Tuesday night, The Oregonian reported. The show showed a brief segment of their performance.“I think a lot of people have got better,” judge Simon Cowell said. “I think you’ve got worse.”
Orthodox Jewish beatboxers
Swartz-Brownstein is a native of Portland, Oregon, and a student at Yeshiva University. Leviton is a consultant.“We chose to go on the show to use this gift of being able to beatbox, and show the world you don’t judge a book by its cover,” Swartz-Brownstein told The Oregonian.In their July 5 appearance on the NBC reality show, the duo garnered unanimous “yes” votes from the judges for their rendition of Meghan Trainor’s “All About That Bass.” The pair performed with their tzitzit and kippot visible.The duo met three years ago at the Western Wall when they were yeshiva students in Israel, they told the judges during that show.Leviton, who goes by the moniker “The Orthobox,” has performed with the popular Jewish a cappella group The Maccabeats. Swartz-Brownstein is known as “The Aleph Bass.”In their audition video submitted last year, they were beatboxing to “Hava Nagila.”