Archbishop of Palermo to hand over ownership of the facility, where Great Synagogue once stood. 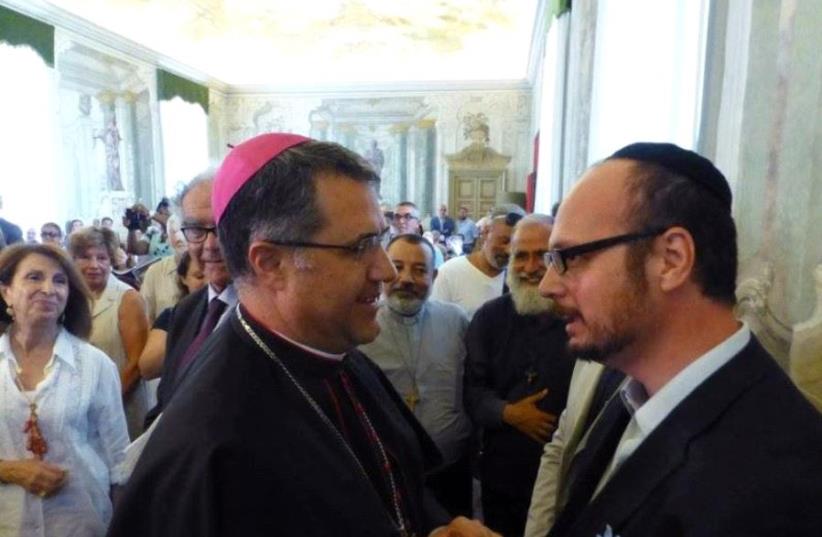 Palermo Archbishop Corrado Lorefice (left) with Shavei Israel’s emissary to Sicily, Rabbi Pinhas Punturello (right).
(photo credit: SHAVEI ISRAEL)
Advertisement
More than 500 years after the expulsion of the Jews from Sicily, Palermo’s small but renascent Jewish community is set to celebrate the opening of its first synagogue since the Spanish Inquisition.At a ceremony on Thursday, Archbishop of Palermo Corrado Lorefice will officially transfer to the Jewish community a facility owned by the church and monastery of St. Nicolo Tolentino, which was built atop the ruins of the Great Synagogue of Palermo.The date chosen for the handover is significant; January 12, 1493 was the deadline of the expulsion of Jews – by order of Queen Isabella I of Castile and King Ferdinand of Aragon – from the Italian island.The transfer set to be made on this historic anniversary was requested by the Jerusalem- based nonprofit Shavei Israel and the affiliated Sicilian Institute of Jewish Studies (ISSE).Shavei Israel’s founder and chairman Michael Freund has spent over five years lobbying the church to help revive the once-vibrant Jewish community.A small number of Sicilian Jews who were not expelled underwent forced conversions and remained in their native country.“Ever since I learned about Sicily’s history, my goal has been to lay the groundwork for the establishment of the first Jewish community in Palermo in more than five centuries,” Freund. said “That is what makes this week’s ceremony so important: we will be establishing, together with the ISSE, the first synagogue and Jewish house of study in Palermo since the expulsion,” he added.“I am very moved that it will be located adjacent to where the Great Synagogue of Palermo once stood and I am grateful to the archbishop of Palermo for having the vision and courage to make such a grand gesture of reconciliation toward the Jewish people.”The ISSE represents the local Jewish community, which today numbers some 60 to 70 people. According to Shavei Israel – which is active around the world in communities of Bnei Anousim (forcibly converted Jews) – growing numbers of Sicilians are now rediscovering their Jewish roots.“It is a miracle that after more than 500 years there are still people in Sicily who proudly cling to their Jewish roots and it is testimony to the fact that neither the expulsion nor the Inquisition was able to extinguish the eternal Jewish spark in their hearts,” Freund said. “With God’s help, the sounds of Sabbath hymns and Jewish prayers will once again be heard in the streets of Palermo.”The synagogue will include a study center and a Jewish heritage center.“It is with great joy that we have responded to this request to have a place of study and worship for the Palermo Jewish community,” Lorefice said.“The new synagogue’s location atop the ancient ruins of Palermo’s Great Synagogue makes this historic moment all the more exciting. This transfer is the product of a genuine friendship and ongoing dialogue between the church and Palermo’s Jewish community.”Shavei Israel, whose emissary to Sicily, Rabbi Pinhas Punturello, serves as rabbi to the local Jewish community, will be the primary operator of the synagogue.The organization works to strengthen ties between the Jewish people, the State of Israel and the descendants of Jews around the world.