Rob Reiner on Jared Kushner: He turned his back on Judaism

Reiner: "He’s turning his back on his religion and his heritage just so he can make money? I don’t get it. I just can’t wrap my mind around it." 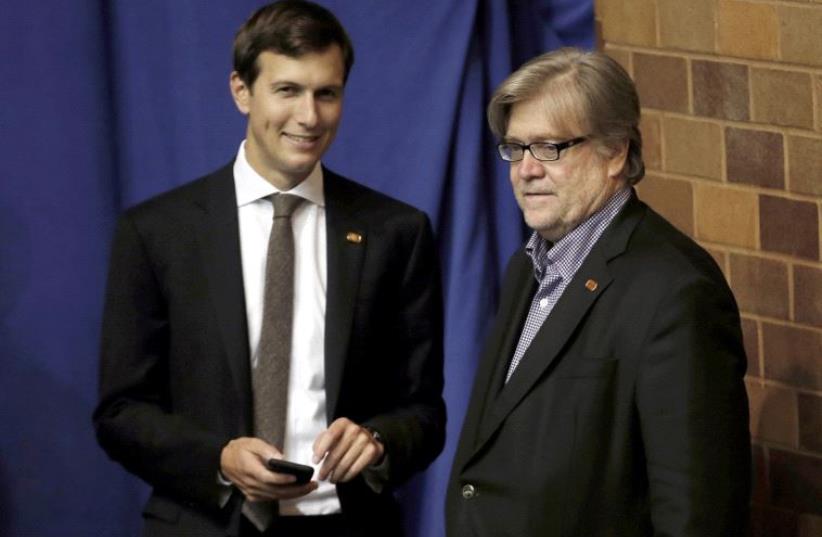 Jared Kushner (L) and Stephen Bannon stand off stage as Republican presidential nominee Donald Trump holds a campaign rally in Canton, Ohio, September 14, 2016
(photo credit: REUTERS)
American filmmaker Rob Reiner accused President-elect Donald Trump’s Jewish son-in-law of turning his back on his religion.“I don’t understand Jared Kushner at all. What is he doing? He’s turning his back on his religion and his heritage just so he can make money? I don’t get it. I just can’t wrap my mind around it,” Reiner, who is Jewish, told The Daily Beast in an interview published over the weekend.Kushner is a modern Orthodox Jew, and Ivanka Trump converted to Judaism under Orthodox auspices to marry him.Reiner, who also is a Democrat and publicly supported Democratic presidential nominee Hillary Clinton, pointed out that Kushner’s brothers-in-law Eric and Don Jr. were retweeting memes from anti-Semitic websites and welcoming support from anti-Semitic and racist groups.“The whole time while all those anti-Semitic memes were being passed on throughout the campaign, [Trump] certainly must have known, and his sons Eric and Don Jr. must have known they were retweeting things from anti-Semitic websites,” Reiner said. “Even if you want to cut them all the slack in the world, they have never to this day said, ‘This is absolutely unacceptable and abhorrent that we are being supported by these groups of people.’ They’ve never said it! So they’re completely comfortable with the idea that anti-Semitic and racist groups are supporting them.”Meanwhile, The Daily Beast also reported that Steve Bannon, the man Trump appointed as his chief White House strategist, is profiting off of Reiner shows such as “Seinfeld,” after being involved in a deal with his production company Castle Rock Entertainment in the 90s, when he ran a boutique investment bank Bannon & Company.