While magazines lambasting religion and politics in an irreverent style are fine, he contended, it is “absolutely unacceptable.” 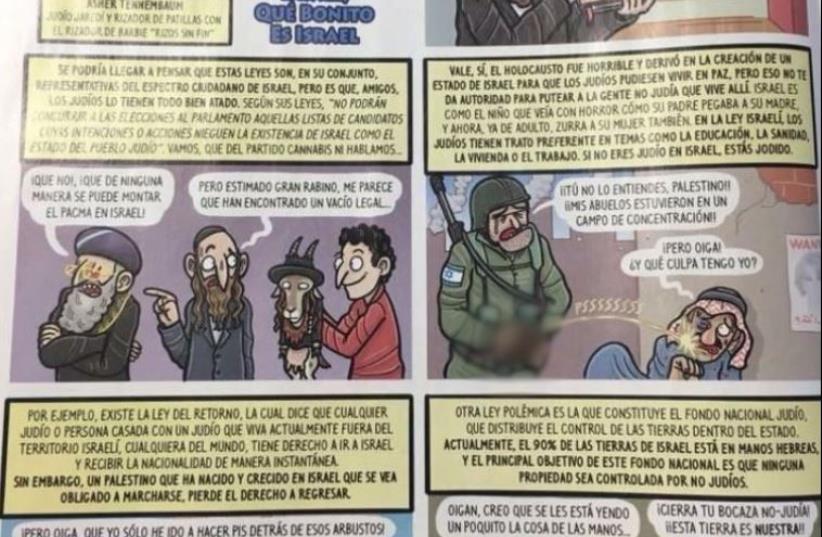 Comic depicting IDF soldier urinating on Palestinians
(photo credit: EL JUEVE)
Advertisement
The Spanish Jewish community is threatening legal action for a Nazi-style cartoon published by a Barcelona- based satirical magazine portraying hook-nosed Israeli soldiers urinating on Palestinians and physically abusing Jesus.In the most recent issue of the popular left-wing El Jueves, a publication similar in many respects to the irreverent French weekly Charlie Hebdo, illustrator Julio Serrano harshly criticizes the Jewish state, including allegations that Jerusalem’s Israel Museum keeps a Torah scroll wrapped in “the skin of my holy testicles,” and that any Jew who marries an Arab is stripped of his citizenship and expelled.“This is absolutely outrageous and obviously we are going to be seeking legal remedies,” David Hatchwell, the head of the Jewish community of Madrid, told The Jerusalem Post on Thursday.While magazines lambasting religion and politics in an irreverent style are fine, he said, it is “absolutely unacceptable” to engage in “anti-Semitic attack and slanders against the Jewish people.“This [cartoon] could be taken from the Nazis’ Der Stürmer and nobody would notice the difference,” he said, referring to El Jueves’s portrayal of Jews as having long hooked noses and seeking to dominate their gentile neighbors.In one panel an Israeli soldier, wearing what appears to be a German style helmet, can be seen holding his genitals in his hands as he urinates on a cowering Arab and cries out, “You don’t understand, Palestinian, my grandparents were in a concentration camp.”Serrano wrote in the magazine, “Okay, the Holocaust was horrible and resulted in the creation of the State of Israel so that the Jews could live in peace, but that doesn’t give you the right to hassle the non-Jewish people who live there.Israel is like the child who watched in horror as his father beat his mother and now, as an adult, he beats his wife. Under Israeli law, Jews have preferential treatment as regards education, health, homes and work, and if you are not Jewish in the State of Israel, you are f***ed,” he said.Regarding politics in Israel, Serrano wrote that “the Jews have it all tied up,” and non-Zionist parties are banned, “so let’s forget about the cannabis party.”Another illustration showed an IDF soldier kicking an Arab woman and a hassidic man.Explaining that Israel constitutes “Apartheid 2.0,” the illustrator averred that “no Israeli can marry a Palestinian, [and that if] such a union take place, the Israeli loses his citizenship and is obliged to emigrate.“The Palestinians are forced to use secondary roads, which are studded with checkpoints at which Israeli soldiers exercise an iron control over the movements of those who are not Jews,” he added, using a picture of a long-nosed Jew pushing a beaten Jesus next to a checkpoint.“There is no real protocol of behavior and the soldiers do whatever they want with the Palestinians, they can forbid them from passing [the checkpoints], detain them, take their things away and worse. It has been calculated that every Palestinian spends some four hours a day stopped at these controls.”Hatchwell responded: “These are lies, totally non-factual, and it’s done in a sophisticated enough way that people who know nothing about the conflict will think that Israelis are Nazilike oppressors, and it affirms every myth [that has been held] in Europe [about Jews] for thousands of years.”The community plans to turn to the courts with a complaint of hate speech against this “pure anti-Semitism” that is “anathema to the values of modern Spain,” Hatchwell said.The Simon Wiesenthal Center issued a statement to the Post calling the cartoons “classic anti-Semitism camouflaged as ostensibly legitimate criticism of Israeli policies.”

Marion Fischel contributed to this report.