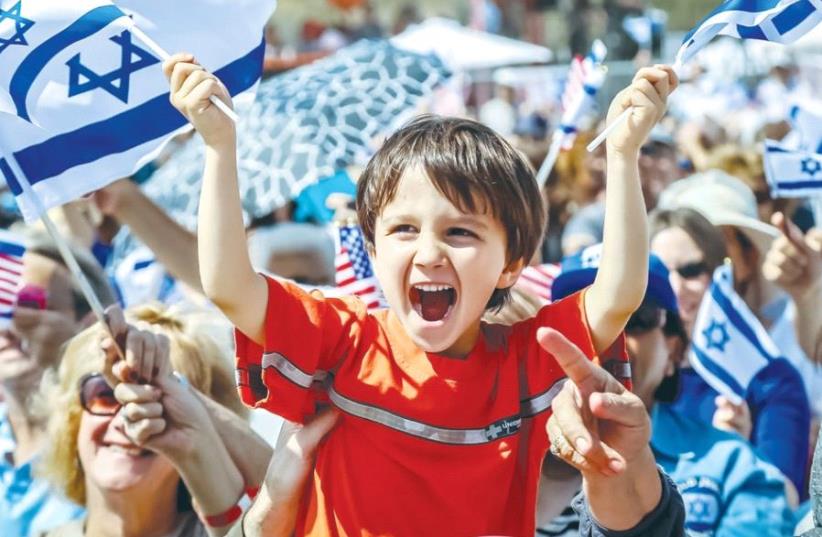 PEOPLE PARTICIPATE in a Celebrate Israel Festival event in 2016.
(photo credit: LINDA KASIAN PHOTOGRAPHY)
Advertisement
A pro-Israel festival will take place in Los Angeles this Sunday to celebrate Israel's Independence. Fifteen thousand people are expected to attend the event which will include live music, arts and crafts and family friendly activities.
The StandWithUs organization will host a 1-mile “Celebrate Israel Walk” followed by a concert featuring best-selling Israeli singer Lior Narkis and hosted by veteran actor Mike Burstyn, star of the classic Kuni Leml series.
Also scheduled to attend will be Los Angeles Mayor Eric Garcetti, Senator Holly Mitchell, Senator Ling Ling Chang, City Controller Ron Galperin, City Attorney Mike Feurer, Councilmembers Lindsey Hovath and Paul Koretz and Assemblymen Jesse Gabriel and Richard Bloom.
Unique to this year's event will be a special exhibit called "Heroes: Jewish Trailblazers Experience" an interactive exhibit sponsored by the Museum of the Jewish People.
A "shuk" or marketplace will feature local vendors and artists from Israel and  selling crafts, jewelry, and Judaica.
“We were incredibly lucky to grow up in a place like Israel – surrounded by our history, our heritage and a rich and diverse culture," stated event founder said Naty Saidoff. "Now that we live here, we want our fellow Americans who have embraced us so warmly to share in the experience of all the beauty that is the modern day miracle called Israel. This one-day festival is the closest you can come to truly being there," he said.
The Celebrate Israel event is organized by the Israeli-American Council and several dozen co-sponsors including local synagogues, and Jewish organizations. It will take place at the Cheviot Hills Recreation Center.
Los Angeles is home to the second largest Jewish community in the United States. Israeli Independence day (Yom Haatzmaut) was celebrated in Israel on the Hebrew date last week. It commemorates the signing of the Declaration of Independence on May 14, 1948 after the British empire left the country the ruled for the previous 31 years.