By TOVAH LAZAROFF
Children at dedication ceremony of a new neighborhood in the settlement of Gitit in Jordan Valley
(photo credit: REUTERS/Ronen Zvulun)
Advertisement
Tenders were issued for 4,868 new homes over the pre-1967 lines during the nine-month negotiating process with the Palestinians which ends today, according to a report published by the non-governmental group Peace Now.Out of those, 46% or 2,248 units were in West Bank settlements and 54%, 2,620 were in east Jerusalem, according to Peace Now.In addition, the Civil Administration advanced plans for 8,938 new housings units over the Green Line, of which 26%, or 2,422 units were in east Jerusalem. The remaining 74% of the plans, or 6,561 units, were for potential homes in West Bank settlements. 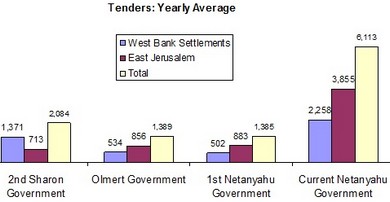 (Courtesy Peace Now)Peace Now noted only 27% of the plans advanced for new settler homes were in the settlement blocs, which Israel believes would remain part of its state in any final status agreement with the Palestinians. The bulk of the plans, 73%, were for Jewish communities outside those areas, Peace Now said.The Palestinians have long charged that settlement activity and Jewish building in east Jerusalem is harmful to the peace process and have demanded Israel halt all such activity.But Israel has insisted on its right to continue building over the pre-1967 line, including during the nine-month negotiation period that began at the end of July, 2013.  To sway the Palestinians to hold direct negotiations with Israel, the government agreed to release 104 prisoners held in Israeli jails for their involvement in terror attacks in which Israeli citizens were killed.Israel released 78 of those prisoners in three separate released. Israel advanced plans and authorized new building in each of those releases. With each building announcement it noted that it had never agreed to halt building over the Green Line. It linked the advancement of building plans and the authorization of new units with the release of the Palestinian prisoners.In March, Israel  balked at freeing the final batch of 26 prisoners until it received assurances that the talks would continue beyond the initial April 29th deadline.The Palestinians instead took unilateral steps to shore up their legal standing as a state and ratified 15 international covenants and treaties. In response, Israel canceled the last prisoner release. Left wing politicians attacked the government after hearing the Peace Now numbers. “This exposes the true right-wing extremist face of the government, which, over nine months of negotiations, gave a middle finger to the American government's efforts to promote talks, and broke records of building in settlements,” Meretz party head Zahava Gal-On said."All this happened under the sponsorship of the peace-lovers [Justice Minister] Tzipi Livni and [Finance Minister] Yair Lapid, who promised their voters that they will only sit in the government to reach an agreement with the Palestinians," she added.Gal-On said there is no way to blur the reality that the government is not interested in peace and called for Lapid to stop being a coward and block funding to settlements.Knesset Finance Committee chairman Nissan Slomiansky (Bayit Yehudi) said that "Peace Now's distortions come from frustration and an understanding that their movement is on the other side of the separation fence of Israeli society."Slomiansky called for the prime minister to approve even half of what Peace Now claimed is being built.The Council of Jewish Communities of Judea and Samaria counter charged and stated that Peace Now was cynically manipulating numbers to support a left-wing political agenda.Lahav Harkov contributed to this report.