World Walking Day will be marked in Israeli cities and towns on Friday, to raise public awareness of the importance of physical activity for a healthy life. 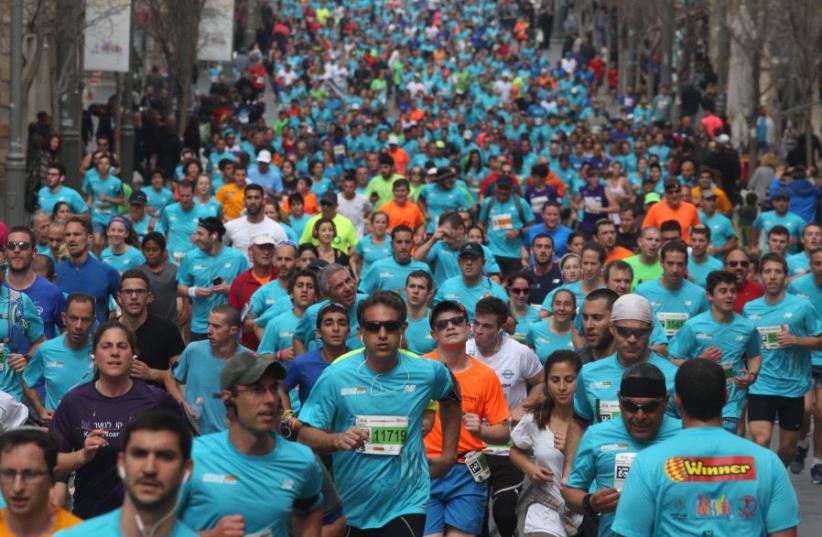 Runners in the 2017 Jerusalem marathon
(photo credit: MARC ISRAEL SELLEM/THE JERUSALEM POST)
Advertisement
Don’t just walk – if you can, run. A study conducted at Ariel University’s behavioral sciences department has found that running makes people happy and fills the need for a sense of belonging, as well as relieving the feeling of isolation.Running has become accessible to almost anyone and even a status symbol, and many people join marathons or partial races to demonstrate their perseverance and strength.The study, conducted as part of a seminar paper by Meron Orbach and Neria Cohen under the direction of Dr. Abira Reiser, was based on 129 subjects with an average age of 38. The participants in the study were all in regular relationships and ran on a weekly basis at least 5 kilometers daily. Half of them earned NIS 20,000 or more per month.The uniqueness of the study is that it examined the psychological factors that explain the relationship between running and feeling happy. All the subjects reported the frequency of their running, filled out a life-satisfaction questionnaire and examined their basic needs for running: the need for ability (the need to achieve personal goals through meeting the challenges and achieving desired results); for autonomy (requiring a sense of personal responsibility and free choice of behaviors; and the need for belonging (emotional sense of security, belonging and closeness to others). The study found that the higher the number of weekly runs, the higher their happiness levels.Runners develop not only a sense of friendship, affection and brotherhood, they found, but also a sense of personal empowerment and feeling part of a group. In addition, the study also examined the effects of partner support for the runners. Although it is found that the support of the partner in the running activity also improves the sense of happiness of the runner, but there is no scientific link between the amount of running and the strength of the relationship.Meanwhile, World Walking Day will be marked in Israeli cities and towns on Friday, to raise public awareness of the importance of physical activity for a healthy life. The World Health Organization recommends walking or other physical activity for at least 150 minutes per week, while physical fitness experts suggest walking 10,000 steps (measured by electronic or cellphone applications) each day.Tel Aviv will have a night race next Tuesday. Thousands of people are expected to participate. To ensure safety and health, Magen David Adom is putting its paramedics and medics on duty to cope with any illness or injury. A tent clinic will be set up at the end point’ ambulances and small vehicles have been readied; and first-aid squads will walk along the route to provide immediate medical attention.MDA said that although the race is at night, make sure to eat a balanced but not heavy meal before and to drink plenty of water before and during. Do not run for longer than you are able.