Arthur Szyk – A soldier in art

Arthur Szyk. Paris, early 1930s.
(photo credit: Courtesy)
Advertisement
What motivated Rabbi Irvin Ungar to commit himself to a search for more than 25 years for an invisible figure in modern Jewish art? Ungar makes it very clear.“While Arthur Szyk’s Illuminated Haggadah is well recognized as one of the great treasures the Jewish people, knowledge about its creator still remains sparse even here in Israel. The fact that no artist created more important and effective Holocaust art during the Shoah than Arthur Szyk has yet to be fully explored.”We are all in for treat when Ungar arrives. Kol Haot, the organization for promulgating Jewish art and inspiring artists to create Jewish art, will be hosting Ungar, who has brought the work of the important but forgotten artist, Arthur Szyk back to life.On November 12, Ungar will speak on Szyk’s bestknown work, his Haggadah, on the topic of “Freedom Illuminated – Understanding the Szyk Haggadah.”After experiences in my youth that I had with Szyk art, when I had not yet realized its importance, unexpectedly, I was contacted by Ungar. At the time, I was a rabbi in Scranton Pennsylvania. In 1988, I received a letter from him. He was prepared to provide an exhibit of Szyk’s drawings that could be held at the University of Scranton library. He would speak on Arthur Szyk’s works at the opening of the exhibit.I signed on. A large group of people turned out – Jews Christians and a few Moslems –to hear him and to view the exhibit. For three weeks, Scrantonians and their neighbors from Wilkes-Barre came to see these powerful portrayals focusing on many topics, including the founding of Israel.A major exhibit of Szyk’s works began on September 12, 2017 at the prestigious New York Historical Society. Ungar recalls, “As I reflect back on the events last year, the success of the Szyk exhibition in New York City and the publication of my book, Arthur Szyk: Soldier in Art, I feel a deep sense of satisfaction, but not a sense of complacency.”Several thousand people visited the exhibit, which followed ones at the Library of Congress, the United States Holocaust Memorial Museum, the German Historical Museum in Berlin and at many other locales around the world. 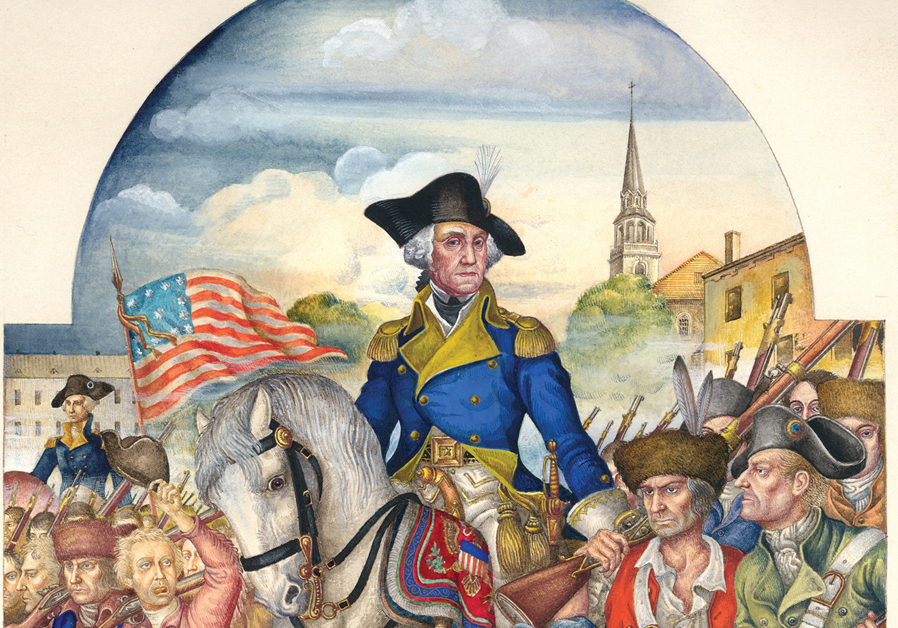 ‘Washington with His Soldiers.’ Washington and His Times. Paris, 1930. (Courtesy)
KOL HAOT is pleased to host Ungar. During the past nine years of its existence, the center has also conducted educational workshops at its Jerusalem center that combine Jewish texts and values with the arts. Participants have included synagogues, missions, camps, day schools and Jewish community centers. The staff of Kol HaOt has planned free holiday events in Jerusalem that attract hundreds of tourists and local residents at each holiday juncture. Every holiday has a special art theme.In addition to its Jewish educational art events and workshops in Israel, Kol HaOt designed and conducts a Teacher Institute for the Arts in the US, to train Jewish day school educators how to integrate the arts into their Judaic studies curriculum. Annually, the number of events in Israel and other parts of the world has grown.In the preface of “Arthur Szyk: Soldier in Art,” Steven Heller described how Ungar carried out his task, stressing, “This book is also a testament to the indefatigable energy of the man behind the scenes whose own willpower reintroduced Szyk’s vivid art to a new audience in a new world.”Heller describes how Ungar accomplished this feat. It was exactly what happened in 1998, when I was living in Scranton.“He galvanized the Arthur Szyk Society, organized events, published a newsletter and books and gradually, with grace and certainty, he educated many who knew nothing.”Summing up the opening last September, Rabbi Irvin Ungar wrote,“There has not been a major exhibition of Arthur Szyk in New York City for over 40 years – his wandering in the wilderness of obscurity has come to an end. The opening of the Szyk exhibition at the New York Historical Society is a dream come true – as if Arthur Szyk had come home to the Promised Land, literally and figuratively.”In the foreword of the book on Szyk, Dr. Louise Mirrer, president and CEO of the New York Historical Society, wrote. “Numerous threats filled the years around World War II – Nazism, the escalating plight of European Jewry, fascism, Japanese militarism.”Then she emphasizes the role of Szyk through his drawings.“The great 20th century activist in art (Szyk) confronted the turbulent, hate-filled period with forceful artistic depictions, caricatures of Hitler, Moussolini, Hirohito as the evil architects of their regimes’ destructive and inhumane policies.”What is the power of these illustrations as hatred grows on a daily basis in “our world?” Why does his work seem as poignant today as when it was first drawn? One answer finds itself in the caricatures of the deadly leaders of that period in the 1930s and 1940s, whose goals were to destroy human beings as brutally as possible, squeezing out lives as their victims died day after day. In focusing on the Jews, Szyk captures their anguish as they are transformed into the tragic figures whose faces we can never forget. They are our ancestors, our brothers and sisters, our husbands and wives and children.Jewish youth, with their stars sewn on, peer out at us longingly with fear written on their faces as they know – but do not really know – what their fate will be. 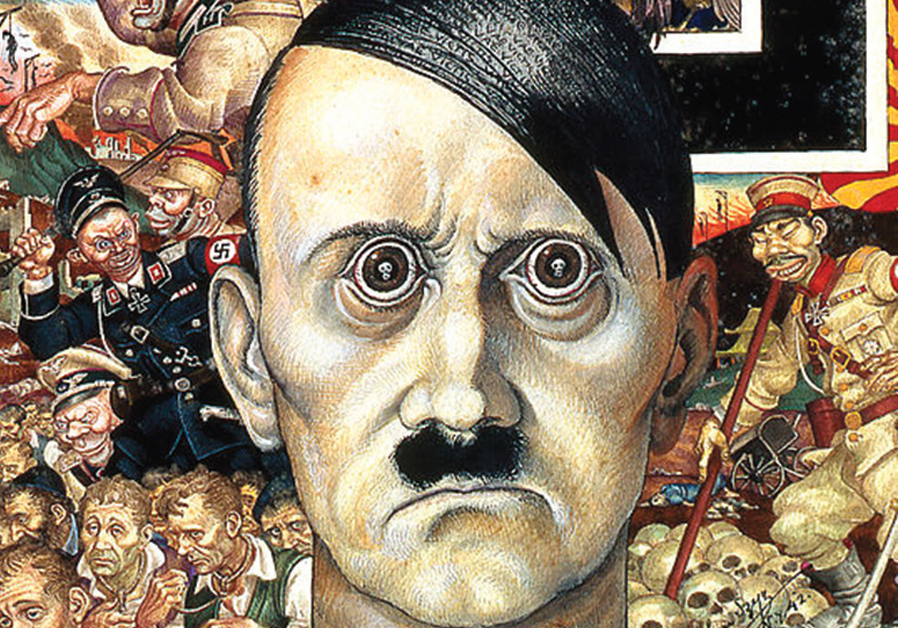 ‘Anti-Christ.’ New York, 1942. (Courtesy)
IN HIS presentation, Ungar will focus on recurring symbols for Hitler’s terror, which we relate to easily because they are ones we, ourselves, fear most. There is the hissing snake, adorned with swatiskas, dramatically present, both waiting to bite or to wind itself around those who are on the way to destruction. I cannot look at Szyk’s art with a sense of innocence because I have been raised by my parents, my teachers and by the world not to forget those whose lives were brutally snuffed out. They were taken from their homes and burned, shot and poisoned with no recognition of their tragic fate by humankind because that fate had been hidden from the world. Now we all can learn how Szyk portrayed that horrendous tragedy.A part of that universe, Szyk sought to awaken the “sleepers” with his images. He presents the strong, muscled builders whose living spirit was never lost because they continued to build even while others were lost. He catches the hatred in the faces of the leaders as they kill and kill and kill, never halting their process of horror and destruction. Then there are his fellow Jews, yellow star-bearing, hungry, forced to be unemployed, deeply saddened as they watch their families go to the killing fields and to the gas chambers.When the Szyk Haggadah appeared in late 1940, the anguish he felt while finishing it was practically erased because of the volume’s beauty. When the Haggadah stepped forward into the world, the Times of London wrote, “The volume is worthy to be placed among the most beautiful books that the hand of man has ever produced.”When Szyk completed the Haggadah between 1934 and 1936, the volume distressed the British leadership because of its appeasement with Germany. The snakes had to lose their swastikas, since they might offend Hitler and his crowd. Upon arriving in the USA in early 1940, he began to draw his very powerful political art. Whenever the snake appeared, it was covered with swastikas. Szyk believed Hitler and the Nazis had to be defeated, thus highlighting the hatred that led to murder of millions of Jews.As World War II came to a close, his hope for his people breaks out in a powerful fashion. The Jews in uniform of the Jewish Brigade fighting is a thrilling sight after all the many efforts with the British, who were lobbied tirelessly not to grant our brethren the right to hold a gun and fight. Then there is his drawing of the Declaration of Independence of Israel. Thousands, perhaps millions of copies have been reproduced of Szyk’s version of the document proclaiming the establishment of the State of Israel. After 2,000 years, the Jews had their homeland once more. Through his powerfully drawn figures of Jews serving and fighting, he underlines the revival of and return to the Jewish homeland, the State of Israel.“Now is also the time,” Ungar suggested strongly, “to bring Arthur Szyk home to the Promised Land of Israel where there has never been a Szyk exhibition; nor any recognition on a large scale for the artist who created more artwork than any activist-artist to help bring about the creation of the Jewish State. Let the exhibition in New York serve as inspiration and celebration for the artist, who in his Haggadah wrote: “I am but a Jew praying in art; if have succeededin any measure; if I have gained the power of reception among the elite of the world, then I owe it all to the teachings, traditions and eternal vision of my People’” .Art critic Carl Van Doren is quoted in the Wikipedia entry on Szyk: “There is no one (Szyk) more certain to be alive 200 years from now. Just as we turn to Hogarth and Goya for the living image of their ages, so our descendants will turn back to Arthur Szyk for the most graphic history of Hitler and Hirohito and Mussolini. Here is the damning essence of what has happened; here is the piercing summary of what men have thought and felt.”The talk will take place on Monday, November 12 at 7 p.m., at Kol HaOt, Hutzot Hayotzer – Jerusalem Artist’ Colony Studio #9. www.kolhaot.com/