By JPOST.COM STAFF
Bulgaria attack rreenactment 370
(photo credit: reuters)
Advertisement
Bulgarian authorities carried out a reenactment Friday of the Burgas terror attack which killed five Israeli tourists and a Bulgarian bus driver in July.Authorities hope to learn further details of the terror attack by blowing up a bus filled with dummies, the Sofia News Agency reported. The reenactment was carried out in conjunction with Europol.The reenactment, taking place near Ihtiman, Bulgaria, hopes to uncover where the explosives were located on the bus and when they were detonated.Bulgaria revealed in February that their probe into the bombing had found that operatives of Hezbollah's military wing were assumed to be behind the terror attack. 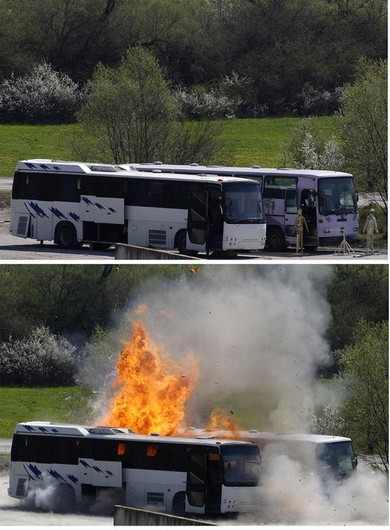 Although Bulgaria implicated Hezbollah in the attack, they are yet to identify the actual bomber or make an arrest of two accomplices in the case.Both Israel and the US, as well as Canada and the Netherlands, have pushed the European Union to designate Hezbollah a terrorist organization in the aftermath of the attack on European soil, but the EU has been reluctant to do so pending further evidence that Hezbollah perpetrated the attack.Bulgarian authorities released new evidence earlier this month about the amount of explosives used in the bombing . 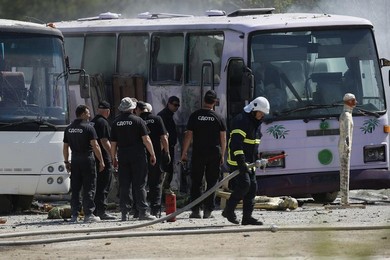 According to Bulgarian media reports, the bomb contained three kg. of TNT explosives.“The final details such as the exact position of the bomber at the time of the explosion will be established by the reenactment scheduled for April 26 at the Ihtiman training ground, when two buses with dummies as passengers will be blown up,” the Sofia News Agency reported.“The bomber attempted to put the explosives in the bus luggage compartment, while others say he stood near the door,” the news agency added from witness accounts.Bulgaria’s Interior Ministry’s Technical Operations Directorate conducted the bombing exercise.Benjamin Weinthal contributed to this report.