Warning: Some viewers may find the below footage distressing. 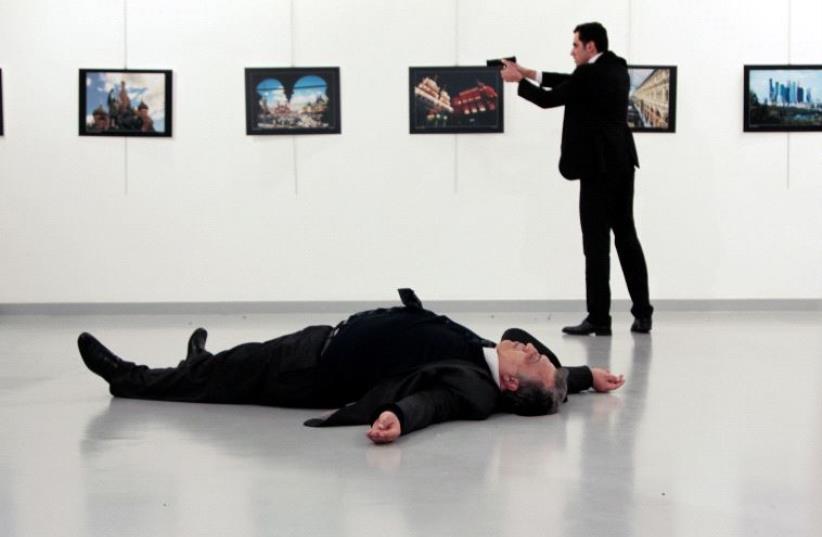 Russian Ambassador to Turkey Andrei Karlov lies on the ground after he was shot by unidentified man at an art gallery in Ankara, Turkey, December 19, 2016.
(photo credit: REUTERS)
ANKARA - Russia's ambassador to Turkey, Andrey Karlov, has died of his wounds after being shot in Ankara, the Turkish capital, Russia's Ministry of Foreign Affairs confirmed Monday.Turkish security sources say the gunman, who shouted phrases including "Allahu akbar (God is great). Do not forget Aleppo! Do not forget Syria! Do not forget Aleppo! Do not forget Syria!" was off-duty special forces police officer Mevlüt Mert Altıntaş. He was shot and killed at the scene by Turkish authorities who rushed to the scene.Karlov did not have personal security assigned to him, and it has been reported that the gunman posed as a bodyguard in order to access the venue and get close to Karlov. The gunman was dressed in a suit and tie, complete with a Russian flag pin.


Karlov was making a speech at the opening of a photographic exhibition examining Turkish and Russian cultural ties. NTV said three other people were wounded in the incident. In photographs posted on Twitter, the gunman was shown standing dressed in a suit and tie, handgun held aloft. Four people including what appeared to be the ambassador lay on the floor nearby.Pictures emerged later online of the gunman lying shot on the ground with multiple bullet wounds. Turkey's Interior Minister said that the other three wounded people were not in a serious condition, and that one had already been released from hospital.


Russia and Turkey have been involved in conflict in Syria across the border from where over two million Syrian refugees have settled. Turkey has been a staunch opponent of President Bashar Assad while Russia has deployed troops and its air force in support of the Syrian leader.Relations between Moscow and Ankara have long been fraught over the conflict, the two supporting opposing sides, however ties were warming in recent months. Russia said in the hours after the attack that the incident was a "lowly terrorist attack," and that it would not overshadow ties between the two nations.Turkish police secure the area near an art gallery where the Russian Ambassador to Turkey Andrei Karlov was shot, in Ankara, Turkey. (Credit: REUTERS) Tensions have escalated in recent weeks as Russian-backed Syrian forces have fought for control of the eastern part of the city of Aleppo, triggering a stream of refugees.It was not immediately clear who carried out the attack. ISIS militants and Kurdish rebels have been active in Turkey and carried out several bomb attacks on civilian and military targets. The United States condemned the gun attack on the Russian ambassador, the US State Department said."We condemn this act of violence, whatever its source," said US State Department spokesman John Kirby in a statement. "Our thoughts and prayers are with him and his family."Reuters contributed to this report.
Subscribe for our daily newsletter