By REUTERS
DECEMBER 4, 2011 14:02
Vladimir Putin casts his vote 311
(photo credit: REUTERS)
Advertisement
MOSCOW - Russians voted on Sunday in parliamentary polls seen as a test of Prime Minister Vladimir Putin's personal authority ahead of a planned return to the presidency, and an electoral watchdog complained of 'massive cyber attacks' on a website alleging violations.Putin remains by far the most popular politician in the country but there are some signs Russians may be wearying of his cultivated strong man image. The 59-year-old ex-spy looked stern and said only that he hoped for good results for his United Russia party as he walked past supporters to vote in Moscow.RELATED:
Russians vote in election test for Putin

A Western-financed electoral watchdog and two liberal media outlets said their sites had been shut down by hackers intent on silencing allegations of violations. Sites belonging to the Ekho Moskvy radio station, online news portal Slon.ru and the watchdog Golos went down at around 8 a.m."Massive cyber attacks are taking place on the sites of Golos and the map showing violations," Golos said on twitter.Golos said it was excluded from several polling booths in the Siberian Tomsk region. Moscow prosecutors launched an investigation last week into Golos' activities after lawmakers objected to its Western financing. On Saturday, customs officers held Golos's director for 12 hours at a Moscow airport.Washington said it was concerned by "a pattern of harassment" against the watchdog. 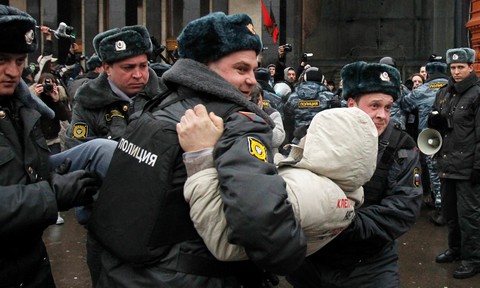 In central Moscow, activists protested during a rally called "People against illegal elections," organized by the "Left Front" movement. Ekho Moskvy editor-in-chief Alexei Venediktov wrote on Twitter: "It is obvious the election day attack on the (radio) site is part of an attempt to prevent publishing information about violations."

President Dmitry Medvedev, who is stepping aside in March so that Putin can return to the presidency, has dismissed talk of electoral fraud. Neither the general prosecutor's office nor the Central Election Commission could be reached for comment.
Advertisement
Subscribe for our daily newsletter