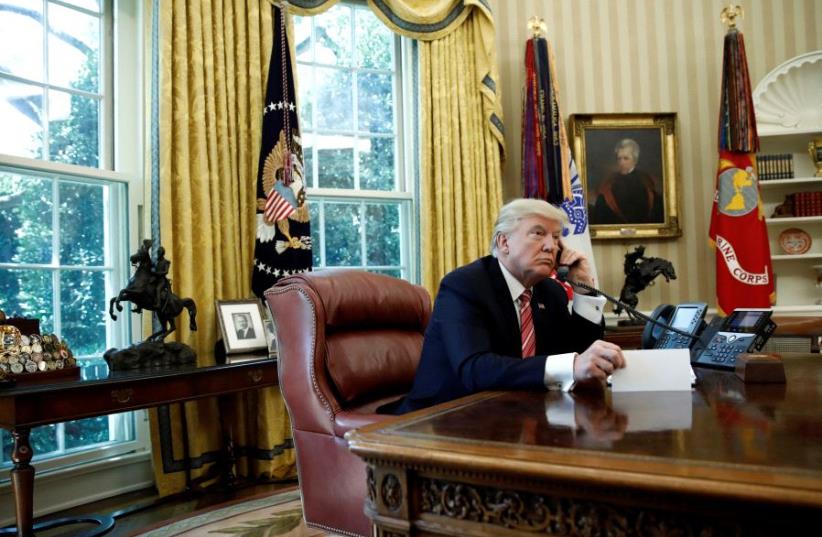 US President Donald Trump during a phone call at the Oval Office of the White House in Washington, U.S., June 27, 2017.
(photo credit: REUTERS/CARLOS BARRIA)
Advertisement
WASHINGTON – US President Donald Trump is encouraging Jewish leaders and rabbis to remain “optimistic” in the new year on the prospects of peace between Israelis and Palestinians, speaking with them briefly by phone to mark Rosh Hashanah on Thursday.“We’re going to be able to get it done,” Trump said. “We did something that I now understand why so many presidents before me didn’t do. They would campaign and they were always going to talk. They were always talking about Jerusalem and the embassy, and it was all very beautiful and everybody was happy. And then they never did it.”“I’d say, you’ll get money, but we’re not paying you until we make a deal,” Trump said. “If we don’t make a deal, we’re not paying. And that’s going to have a little impact.”“I said, “’By the way, did you ever do that before?’” he added. “I said to some of the past negotiators, ‘Did you ever do that before? Did you ever use the money angle?’ They said, ‘No, sir. We thought it would be disrespectful.’ I said, ‘I don’t think it’s disrespectful at all. I think it’s disrespectful when people don’t come to the table.’” On the conference call arranged last week, Trump said he places “very strong” faith in his administration’s peace team, which for 19 months has worked on a plan for a comprehensive Middle East peace agreement. Jason Greenblatt, who is leading those efforts, wrote an op-ed earlier this week marking the holiday by “praying” for peace and calling on the Palestinian Authority to return to the negotiation table. The op-ed ran in the Jewish Telegraphic Agency in English, Israel Hayom in Hebrew and al-Awsat in Arabic.One participant said that Trump acknowledged he was strategically pressuring the PA to return to talks by squeezing US aid to the fragile body.The Trump administration has recently cut all funding to the UN Relief and Works Agency for Palestine Refugees, withdrew from UNESCO and the UN Human Rights Council and signed into law the Taylor Force Act, which cuts congressional aid to the PA unless it ends its “martyr” payment system for the families of convicted Palestinian murderers and terrorists.