The document is largely written, but the toughest negotiations come down to the wording of key annexes. 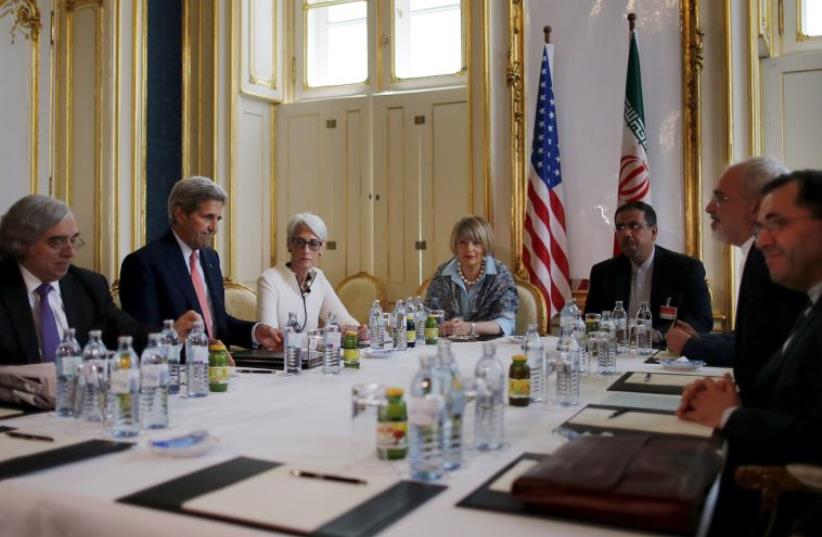 US Secretary of Energy Ernest Moniz, US Secretary of State John Kerry and U.S. Under Secretary for Political Affairs Wendy Sherman (L-3rd L) meet with Iranian Foreign Minister Mohammad Javad Zarif (2nd R) at a hotel in Vienna, Austria June 27, 2015.
(photo credit: REUTERS)
Advertisement
VIENNA – The deal at hand with Iran over its nuclear program will be a single, comprehensive text, annexes and all, in English and in Farsi, with “staggeringly consequential” effects on the security of the world, a senior US official said on Monday.Entering a self-imposed deadline for that text, scheduled for Tuesday, the work of negotiators remained incomplete. Political decisions from all sides await. Lawyers still have to review the document once its finished. But the American team hopes to adopt a final text within days – formally achieving agreement on a Comprehensive Joint Plan of Action.The United States, Britain, France, Russia, China, and Germany say the CJPOA will adequately restrict Iran’s ability to obtain nuclear weapons.The negotiations are in their final round here in the Austrian capital, where the foreign ministers of each nation are to arrive on Tuesday.The entire US team, already here in Vienna, is preparing for the adoption of the text in two ways. First and foremost, they say, they are inspecting each provision with intricate care.Each of those provisions, one official said, includes “a hundred details,” from the fate of heavy water in Iran’s plutonium facility in Arak to the precise language of a United Nations Security Council resolution that will codify the deal.There are innumerable interwoven details, the official said, “not least of all, what technical experts tell us is real or not.”While June 30 had been the deadline for a comprehensive deal, negotiators have been prepared to negotiate through the deadline for several weeks.They are not, however, considering any long-term extension of the current round.Phasing in a deal has become a negotiation in and of itself.The Obama administration says to expect a multi-phase process that begins with the adoption of the agreement, then enters a period of procedural implementation, and is followed by a moment the deal “goes live” and all provisions activate.“There wasn’t paper out of Lausanne. You didn’t have a text. You had parameters,” the senior US official said, on the condition of anonymity.“You are going to have a text...it will be evident to everyone what has been agreed.”The official said the US team expects a “roller coaster” entering the final days of their effort, similar to what they have experienced over two years of negotiations.“We know what we need,” the official said, “and we’ll deal with what comes.”US Secretary of State John Kerry held meetings internally on Monday, as well as one meeting with the head of the UN’s nuclear watchdog, the International Atomic Energy Agency, an independent body that will be tasked with monitoring Iran’s nuclear sites under the deal.He is to meet Tuesday with Iranian Foreign Minister Mohammad Javad Zarif, who traveled to Tehran on Monday to consult on the deal’s final stage with the country’s supreme leader. Zarif plans to return from Iran early on Tuesday morning.Also scheduled to arrive on Tuesday is Russian Foreign Minister Sergey Lavrov, who is to meet with Kerry at some point in the afternoon.Over the weekend, one Chinese official said they expect the document to be “finalized on schedule, or maybe within a week.” The European Union’s high representative for foreign affairs, Federica Mogherini, said the parties are not considering an extension beyond that point.Everyone at the table “feels the burden of the responsibility” for this deal, the US official said. “Making this decision to actually do the Joint Comprehensive Plan of Action is a very, very, very big decision for everybody.”It’s a decision that Israel hopes the negotiators will postpone.One of the fundamental disagreements Israel and the US have over a possible deal is that, while Israel views Iran as the main problem in the region, the US views it as part of the solution, Defense Minister Moshe Ya’alon said on Monday.Ya’alon, at a briefing with diplomatic reporters in his Tel Aviv office, said that world powers and Iran are headed to a nuclear agreement, even if Tuesday’s deadline is not met, and that despite some last minute delays, the negotiations are not on the verge of collapse.“What is clear is that this is a bad agreement,” he said. “After it is signed, we will have a nuclear threshold Iran.”He said that the agreement does not close any Iranian nuclear facilities or dismantle centrifuges, and only suspends the Iranian nuclear program, which he said clearly has a military element.Ya’alon said that despite the disagreements with Washington, the close channels of communication and cooperation between Israel and the US remain open. He asserted that Israel has influenced the agreement being worked out, and wants to continue to do so as much as possible.After the agreement is signed, he said, Israel will likely enter in talks with the US over what is needed to preserve its qualitative military edge, not only because of the threat from Iran, but also since Washington has promised state-of-the-art weapons systems to some Arab states in the region that also feel threatened by Iran.Herb Keinon contributed to this report.