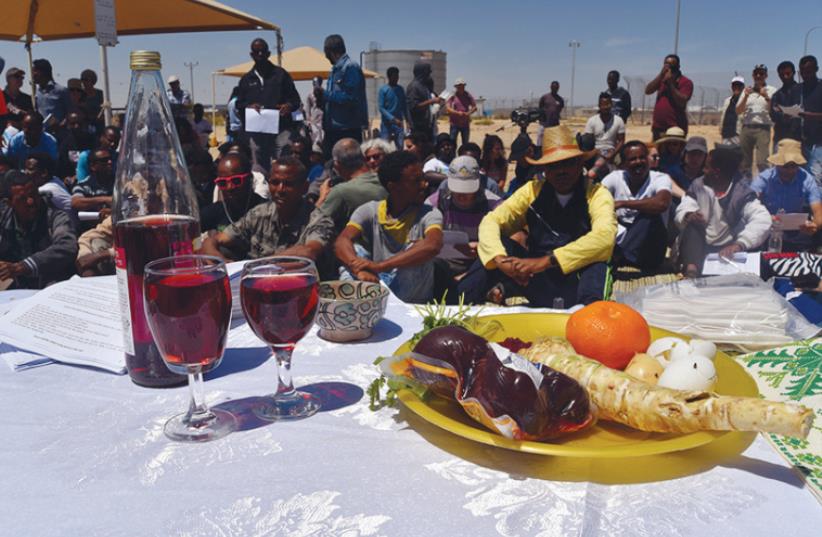 AFRICAN DETAINEES at the Holot detention center in the Negev celebrate a pre-Passover Seder on Friday initiated by Rabbis for Human Rights and Right Now: Advocates for Asylum Seekers in Israel
(photo credit: RABBIS FOR HUMAN RIGHTS‏)
Advertisement
In what has become an annual event, several dozen activists went to the Holot detention facility in the Negev to conduct a model Seder with African asylum-seekers detained there.In light of reports about the poor standard and low nutritional quality of food provided to detainees at Holot, this year’s Seder was based on the theme of “Let all who are hungry come and eat,” the passage from the Haggada inviting all-comers to one’s service.Between 150 and 200 Israeli visitors went to Holot near the Sinai border on Friday morning and were joined by approximately 250 African detainees for the event, which was organized by Rabbis for Human Rights and Right Now: Advocates for Asylum Seekers in Israel.The Seder was described as an intercultural, interfaith ceremony, in which the traditional story of the Israelites’ Exodus from Egypt was told, along with the stories of African asylum-seekers of how they came to Israel.Almost all of the 45,000 African refuge-seekers in Israel are from Eritrea and Sudan, both of which Freedom House, a democracy watchdog organization, ranks as among the 10 most repressive countries in the world. Approximately 3,300 are currently being held in Holot.The event also included joint prayers, singing, several speeches and a large pot-luck meal.Ilav Argay, 22, from Eritrea, was one of the detainees to participate in the Seder. He came to Israel in 2007 when he was 14 along with his parents and brother, after his father fled the indefinite military service imposed on all citizens by the Eritrean government, some of whom are forced to serve for more than a decade.Argay was educated in the Israeli school system and speaks fluent Hebrew.“I came here when I was very young, I studied here, I’m connected to the culture, I’m like an Israeli to all intents and purposes,” he told The Jerusalem Post.“Jews know what it means to be persecuted and to be refugees, having suffered during biblical history and in modern times in Europe and the Nazi persecution, yet the State of Israel chooses to ignore the situation of African refugees and to end the hope of people who are stuck in limbo, people who can’t go back to where they came from,” he said.He said he appreciates the efforts of the visitors and activists who went to Holot on Friday and that the Seder was a welcome event.“They made an effort to see us and hear our stories. It was good to see people who care about us and it made us feel that, despite all these terrible things, there’s a little bit of hope since there are people who care,” Argay said.Elliot Vaisrub Glassenberg, a volunteer with the Right Now activist group who went to Holot on Friday, drew particular attention to the poor quality of food served in the detention center.He said the main problems with the food include small servings, which are often undercooked or overcooked, and insufficient protein and fresh vegetables and fruit, which is frequently overripe.There are numerous cases of food poisoning and many people have gotten sick from lack of nutrition, compounded by the insufficient health services, he said.It is prohibited for detainees to bring food into Holot, a regulation that is being fought in the High Court of Justice.“Holot should not exist,” said Glassenberg, 32, a resident of Tel Aviv. “Israel isn’t improving life in south Tel Aviv, it’s just taking away the basic liberties and dignity of thousands of people who came here looking for asylum, at great moral and economic cost to the country.“It cost NIS 300 million to build Holot, and costs NIS 100m. to maintain it per year. If they weren’t in Holot, most of these people would be working, paying taxes and contributing to Israel’s society and economy.”Israel has granted African asylum-seekers in the country temporary protection, although almost none has been granted refugee status.Government ministers have frequently argued that they are economic migrants, although 82 percent of asylum applications by Eritreans in the developed world were accepted in 2015, as were 68 percent of Sudanese requests, according to the Hebrew Immigrant Aid Society NGO.