Aiming to illustrate the suffering of cattle and sheep shipped to Israel from overseas, about 55 protesters took to the Eilat boardwalk on Wednesday night. 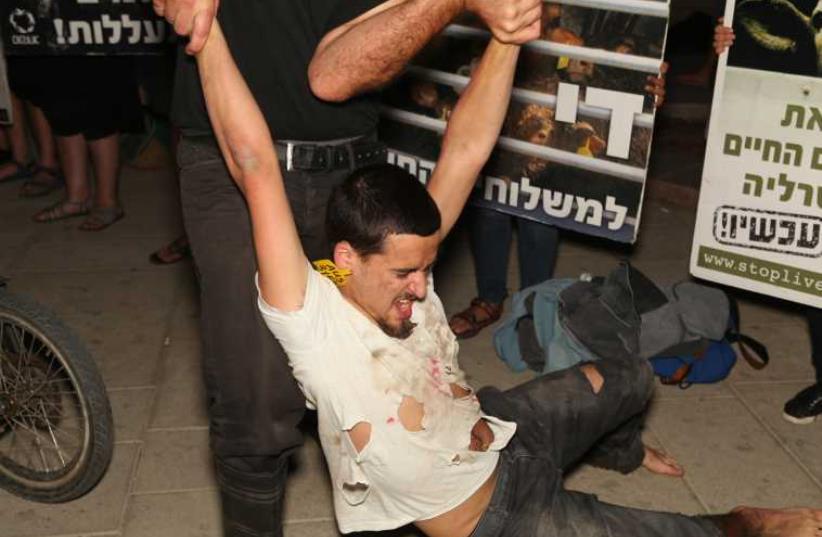 Animal rights protest in Elilat
(photo credit: YOAV BEN-DOV)
Advertisement
Some 55 protesters took to the Eilat boardwalk on Wednesday night – some tagged with numbers, shackled and covered in fake blood, aiming to illustrate the suffering of cattle and sheep shipped from abroad.The demonstrators, from the organizations Let Animals Live, Anonymous for Animal Rights and Israel Against Live Transports, staged their demonstration in Eilat following another two days earlier in Haifa, as the ports in both cities receive ships full of live cattle and sheep on a regular basis. Demanding freedom for the animals from brutal conditions associated with the overseas travel, the groups chose to hold their protests during Passover.“On this holiday of freedom, we are sounding the alarm of animals enslaved to industry and calling for the prohibition of live deliveries,” the organizations said in a statement. “On the Seder night we ask what is different on this night from all other nights, but from the perspective of animals, nothing has changed.” 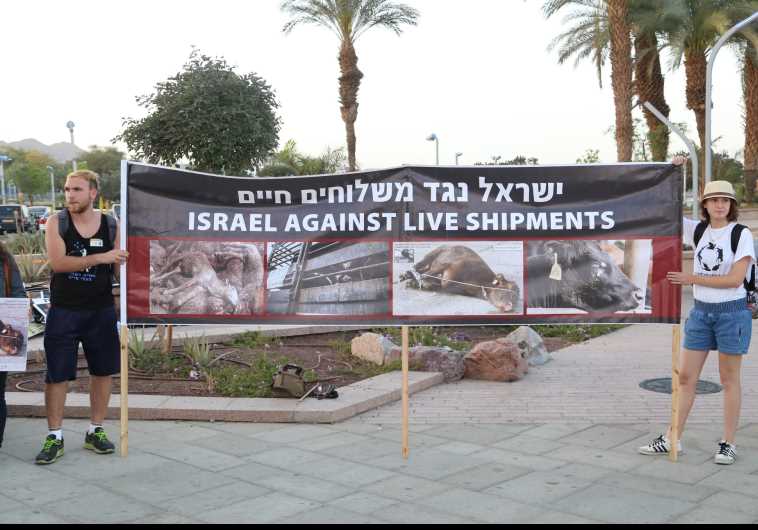 Activist protest in Eilat (Picture: Yoav Ben-Dov)
Each year, Israel imports more than 200,000 cattle and sheep, predominantly from Australia and Eastern Europe, the groups explained. On the way, they face an arduous journey, stuffed into ships with filthy conditions, the NGOs said.In February 2014, at least 840 sheep died on a vessel carrying them from Australia to Israel, after mechanical failures caused travel delays.Four months later, Let Animals Live members appealed to the Agriculture Ministry to demand an end to live cattle import permits. They said they have still not received a definitive answer.The activists have also targeted the treatment of the animals once they arrive.Just last week, the groups submitted a petition to the Central District Court against the Agriculture Ministry, arguing that the ministry refused to supply Let Animals Live with data concerning the transfer of Australian-born calves from Israel to the Gaza Strip.Australia’s Exporter Supply Chain Assurance System (ESCAS) requires that live cattle exporters be able to ensure that their animals are kept only in properly approved facilities, up until their slaughter, the groups said. After receiving complaints about the condition of cattle in Gaza, ESCAS in November 2013 ceased granting approvals to export cattle to the Strip via Israel, due to noncompliance with animal welfare standards, information from the Australian Agriculture Ministry said.Nonetheless, Israel allowed for the transfer of 995 Australian-born calves into Gaza between July and October 2014, the activists wrote in their petition.“There is no logic in transporting animals across continents and oceans, wallowing in their secretions in the underbelly of a crowded ship, only in order to slaughter them in Israel,” the organizations said. “The key to ending this abuse is in our hands – at every meal we can choose between bondage and freedom, and between life and death.”
Advertisement
Subscribe for our daily newsletter