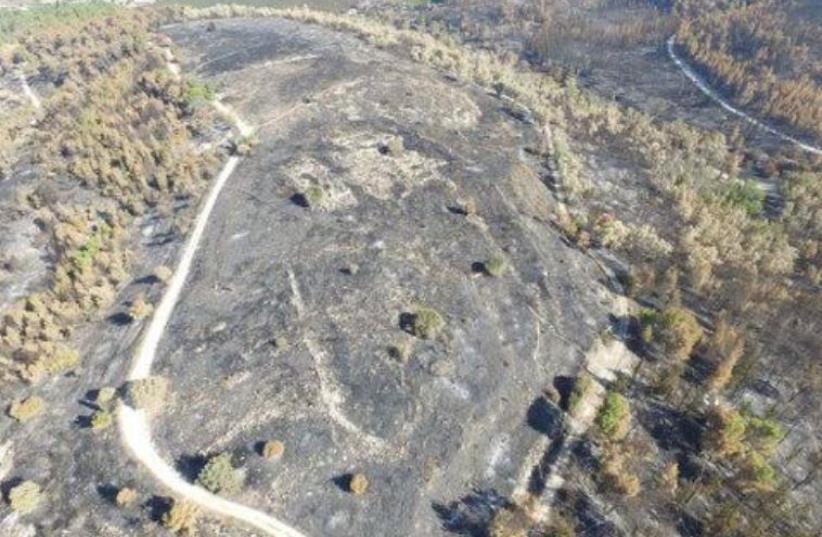 Ariel view of Beit Shemesh archeological site
(photo credit: COURTESY OF THE ANTIQUITIES AUTHORITY)
Advertisement
The theft of a trove of ancient coins was thwarted by a joint force of the Antiquities Authority and Yehuda Region Border Police late Tuesday evening in the Beit Shemesh area.The team of thieves was discovered by Antiquities Authority inspectors observing the area on Tuesday evening, digging and using a metal detector at the archeological site next to Taoz. The inspectors alerted the police who brought in a helicopter to apprehend the suspects.One was arrested while a second managed to flee the scene, though police know his identity.“Hovav Ruins is a legally declared antiquities site,” said inspector Uzi Rotstein. “The suspects took advantage of the unfortunate incident, during which the ruins were burned last Friday in the massive fire that raged in the region. The lack of vegetation and thorns revealed the secrets of the antiquities site and made it easier for the suspects to search with a metal detector for coins in the exposed ground,” he explained.According to the Antiquities Authority, the suspects were found to be in possession of an off-road vehicle, digging tools and an advanced metal detector. The suspect who was caught, a resident of Ramle in his 50s, was found in possession of 63 coins from the Second Temple and Roman periods, some 2,000 years old, that were stolen from the site.The suspect was brought in for questioning at the Yehuda Region police station and admitted to illegally digging at the site.“Unfortunately, the activities of the suspects caused considerable damage to the site,” said Rotstein. “They dug dozens of shallow pits from which the ancient coins were looted, while disturbing the archeological strata, detaching the archeological findings from their context and leading to a loss of valuable archeological, historical and cultural knowledge to the country’s cultural heritage.”The Hovav Ruins is an antiquities site that holds archeological finds from as far back as the beginning of the Bronze Age, 5,000 years ago. Past discoveries at the site include important findings from the biblical times, such as a Hebrew stamp from the First Temple period.The Antiquities Authority’s Unit for the Prevention of Antiquities Robbery said that harming ancient sites is a criminal offense – punishable with up to five years in jail. The case against the suspects will be handed over in the coming days to the state prosecution to prepare indictments.